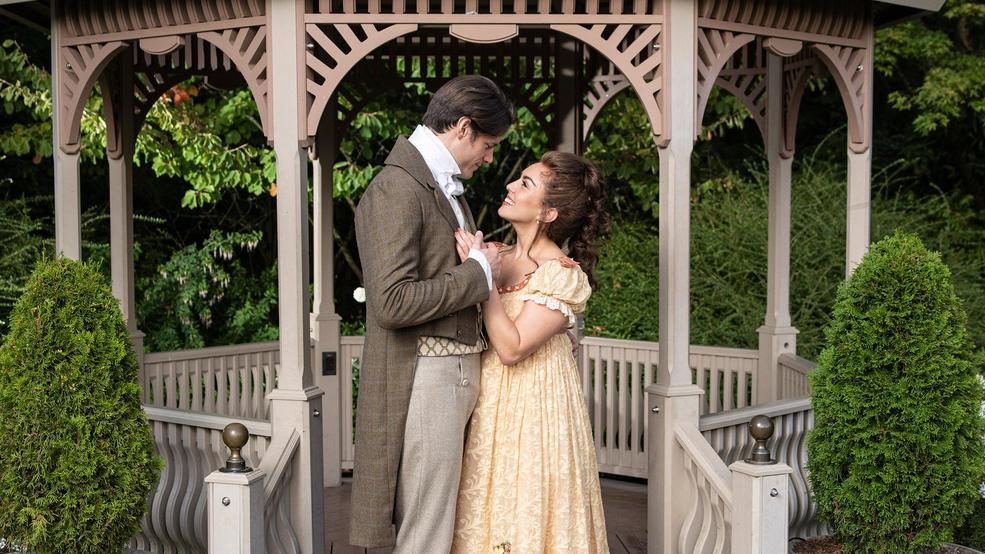 'Austen's Pride' is a fresh twist on a beloved classic

They're an iconic, endearing couple who have have been played through the years by many talents.

This time - Steven Good and Olivia Hernandez play the duo who go through, and grow through, a series of events. Good plays Darcy, and Hernandez plays Bennet in the special adaption "Austen's Pride" at the 5th Avenue Theater that takes the well-known story a step further.

"He is such an interesting character because he comes off as a total jerk at the beginning," said Good of his character. "Which is fun to play, but he’s got his own sense of pride."

"Elizabeth is such a fun person," Hernandez adds. "She’s witty, she has a way of laughing at everything, she’s lively and sees things - she’s a really good judge of character, sometimes to a fault."

It's "Pride and Prejudice" as you've know it, but it's never been told the way "Austen's Pride" has been told - through the lens of the author herself.

"This story picks up also with the success of 'Sense and Sensibility,'" said Hernandez. "So, she succeeded with that story and so her sister is encouraging her to pick up 'First Impressions" which is an old manuscript that she's written and not finished. So, it becomes 'Pride and Prejudice' throughout this story."

"She is sort of working through her own prejudice in her own life," said Good. "The characters will enter when she's not expecting them, or when she doesn’t want them to come in. Especially Darcy, he feels like he’s underwritten in the story."

The work still stays true to the original.

"What's kind of beautiful about the way the adapted this show is that for us, our dialogue is pretty much directly from the novel," said Hernandez. "Which for Jane Austen purists, is a really cool concept."

And then, there's the music!

"You’ll be having these intimate moments and then all of a sudden this song will emerge," said Good. "And the music is really glorious and grandiose. A lot of times when it's an intimate moment so you get a peek into what the characters life’s through the music that you wouldn’t otherwise have gotten through the words."

"So, our characters are all filled in throughout the process of this musical," said Hernandez.

The actors hope that the audience will be delighted with this adaptation.

"And then for people who have never seen 'Pride and Prejudice', the book is full and rich and this musical is just like a WAM BAM, right at you, right at the heart of the story version of the show which is just a timeless classic full of joy and love."

Whether it's a book or musical, the message of 'Pride of Prejudice' is timeless.

"I think it’s a story about love that people will be able to relate to in a lot of different ways," said Hernandez.