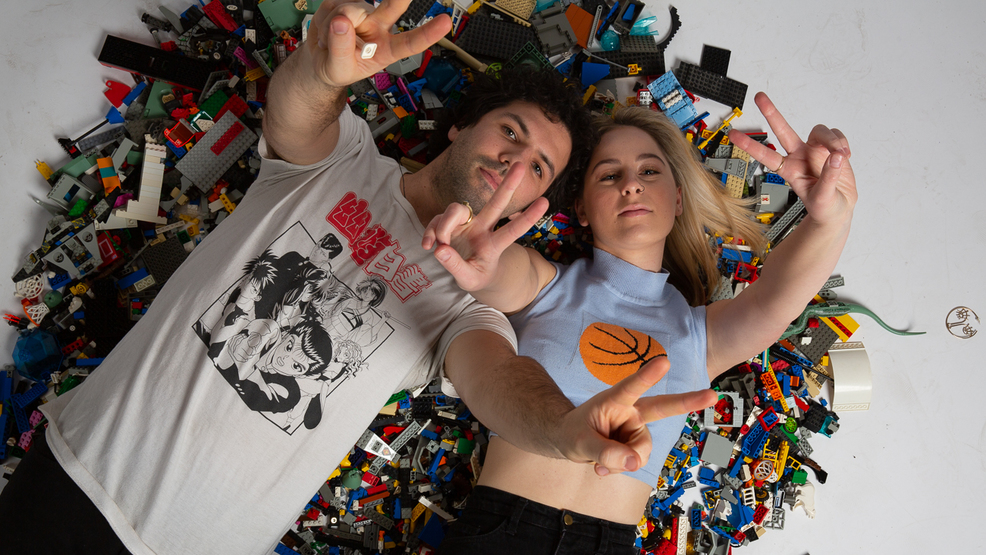 Artist of the Week: Hi Crime

Seattle Refined: How long have you or the band been around/writing together/performing?
Mitch: The band started with just me and Brielle. We met each other in summer 2015 and started recording songs together within just a few weeks of meeting. At the end of that summer, Brielle went back to college for her senior year but would come back every few weeks to keep working on music. By April, we had a finished an EP that we put out on Bandcamp and then went back to writing more songs. It wasn't until a year later, in April 2017, that we actually started performing live. First, as a duo for a couple shows, then with a full band that we primarily play with now.

Tell us about the artistic process and the different stages that work into it.
Brielle: Honestly, the artistic process totally depends on the song. Sometimes, I'll show Mitch a half-finished song - or he'll show me a half-finished song, and we'll work on the rest of it together, so it has both of our styles incorporated. I think working on music with someone else is really powerful; it's fun seeing how the song takes unexpected turns as you work through writing it together. Other times, one of us will come to the other and say, "Ok, so this song is basically done," and then we'll just build on it together, get a vibe going and show it to the band. It's funny, occasionally songs just appear, and you don't have control over if you can finish them or not. They'll write themselves. You're just a conduit for the work.

Where does your inspiration come from? What other musical artists do you take inspo from?
Brielle: My inspiration comes from the little details of every day: recognizing a nostalgic smell but not being able to place it, holding a familiar hand, things that fall behind the bed, street lights shining on cigarette-littered pavement, how the sky sometimes looks like a marbled ocean - basically anything that paints a picture. I'm super drawn to imagery; I've always been someone who loves to write creatively. I grew up on bands like Bright Eyes, City and Colour and Death Cab for Cutie (all deeply rooted in beautiful words), so I think that's where I initially took a lot of inspiration from. These days, I've been really inspired by artists like Orla Gartland, Victoria Canal, Taylor McFerrin, Beabadoobee, Nick Murphy, really so many!

Mitch: It's not fully clear to me. I listen to my favorite music and resonate with certain chord patterns, melodies, and general vibes. But it's a really diverse pool of influences that would clash with each other if I purposely tried to combine everything into one thing. For example, Talking Heads' Remain in Light is one of my favorite albums of all time. It's spastic, chaotic, and, as my roommates can attest to, makes me dance like a crazy person. I wouldn't begin to know how to make an album that sounds like that and make it sound good. Lately, I've been listening to a lot of 60s and 70s folk that's the complete antithesis of Remain in Light. Both of those influences are being drawn from in what I create, but I don't really sound like either of those things. My work would be some combination of my influences, including Animal Collective, Beatles, Tom Petty & the Heartbreakers, David Bowie, MGMT, Gorillaz, Electric Light Orchestra, Kurt Vile, Tame Impala, John Frusciante, and oh so many more.

What kind of genre is your music? What kinds of things do you write about?
Mitch: I used to call our music Shiny Pop. Nowadays, we just call it Indie Pop since that's a more familiar term for people, but calling it Shiny Pop does still feel like a more accurate description. I don't know why, as far as what we write about, I suppose anything that rhymes well is up for grabs!

Do you have one song that means more to you, or is extremely special to you?
Brielle: "Fallacies" is a song that I feel especially connected to, but I have a complicated relationship with the song at the same time. I always joke that it's my "indie-T-Swift" breakup song. I don't actually love the song anymore, and we've stopped playing it live, but it gave me such a great jumping-off point for where music was supposed to come from and how writing authentically was supposed to feel. Something just clicked for me. I can't really explain it. I was going through a really horrible breakup at the time, and I was angry about everything. I needed some sort of release, just some way to heal myself from the mess I was in, and this song helped me process what had happened. In the bridge, I sing, "Now I'm living at my parents' house, and sleeping on my parents' couch, and now I have to live without you" like, ouch. That actually happened. My dad's dog, Maya, slept with me every night on that couch for three months while I got back on my feet. True story, haha.

Mitch: "Out the Window" is special because it was the song that gave me real confidence in myself as a producer. When I moved to Seattle, I didn't know anyone and had to learn how to play new instruments, and learn to mix if I wanted to fully complete my ideas. "Out the Window" felt like a real culmination in skills learned for me. I knew I loved the guitar part for the song, but was overwhelmed at the idea of making it complete. Somehow, everything else came together so fast I barely remember making the song. But I ended up recording every instrument and mixing the song, while Brielle wrote the lyrics and vocal melody. I tried things I had never done before, and was really proud of the result. "Out the Window" was our first song played on the radio, so it was extra validating that the work I did on cheap headphones, in my bedroom, was chosen to be played to people all over the world.

What experiences in your life have shaped your music/art?
Mitch: When it became evident to my family that I was going to pursue music with real intent, the word "luck" kept coming up in conversation. I knew it was a business where you had to get lucky. Unbeknownst to me at the time, when I talked about luck, I was deflecting my responsibility for my own future. My dad shared a quote with me that I wasn't familiar with, "Luck is when opportunity meets preparation." I started to ask, what am I currently prepared for? What are my weaknesses? Guitarists are a dime-a-dozen, what can I do to make my work special? It became obvious that I need to discover what's unique about the way I approach music and work to clearly define my voice. Asking myself throughout the creative process, why do I do it this way? Are there other ways I can approach things? Venturing into those new approaches, not knowing what to do are the most creatively exhilarating.

Brielle: Man, so many things. I'll just list a few: falling in love, falling out of love, losing my mom to brain cancer, having a sister with a disability, getting lost on Crystal Mountain and then getting found by a search and rescue team, moving to Barcelona by myself at 18-years-old, crashing my car, finally going to university, and lastly Brene Brown's talk on "The Power of Vulnerability."

If we want to see more of your work, where should we go to find it? What about upcoming shows?
Hicrime.com is a great landing spot for people new to us. We have a list of live dates, our mailing list, links to Spotify & Bandcamp for streaming/downloads, YouTube for music videos & live performances, and our merch store for shirts & CDs. Following us on Facebook and Instagram are the best spots to get regular updates on everything we've got going on. But we all know the algorithm gods sometimes decide not to show us things we're actually interested in, so signing up for the email list is the safest way to know you're getting all news about new music. Promise we won't spam you. We email, on average, about every six weeks.

What is next for you? Anything you're working on right now that you're really excited about?
Mitch: Our goal is to release new material more regularly; hopefully, something new for people about once a month. We're finishing up a new batch of singles that we'll be coming out within the coming weeks. I'm really interested in the visual representation of our songs, so I'm working on some unique music videos for these songs too. We just released a collection of live performances from our living room rehearsal space, and we plan to do more things like this this year too. Hope you'll stay tuned!

Brielle: Yes! Ditto on what Mitch said. I think everyone in the band is just stoked we're working on new material. Always feels good to breathe some new life back into the project after a batch of songs get stale.

Lastly, how do you take your coffee? We ask everyone!
Mitch: In the trash. I'm a water man, baby.

Brielle: I do love coffee, usually with coconut milk and honey, but I only drink it every once in a while. I'm more of a matcha or chai tea latte kinda gal.