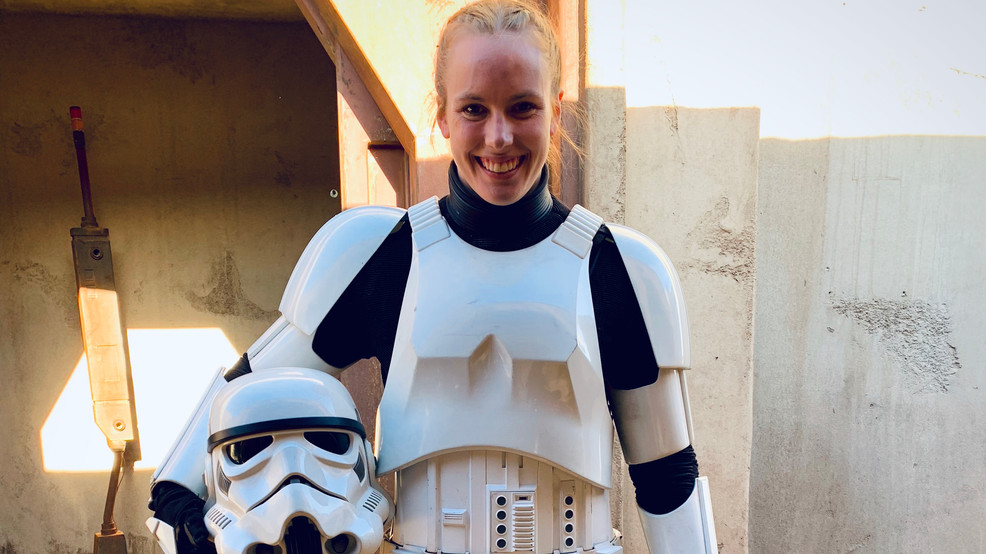 We're lucky enough to get a lot of opportunities to chat with stars who have ties to Seattle - like actor Tom Skerritt and musician Kenny G. But when we heard about a woman who grew up on the Eastside, and is now working as a professional stuntwoman in Hollywood, we had to get the scoop! Amy Sturdivant's journey started when she was a star track athlete at Redmond High. She's been kicking butt in real life and reel life - since then.

Seattle Refined: You actually grew up in Redmond, and flew the coop for Los Angeles and became a Hollywood stunt woman!
Amy Sturdivant: I started at Redmond High School, and then I ended up going to Whitworth University. While I was there, my dad sent me an article about Hollywood stunts. I decided that I wanted to change my whole career path. So I finished up college and moved down to LA.

I’m gonna take your through a few of the huge productions you’ve been involved in. "The Mandalorian" has been a hit - not only are you in the cast, you’re in a ton of episodes. Tell us about some of the characters you’ve played?
I mostly get to play a Storm Trooper alongside the guys.

Traditionally, for whatever reason, people think of Storm Troopers as being male .
Right. Storm Troopers have to be a certain size, like 5”10 to 5”11 which I am, and then kind of my same build. I’ve been lucky the last year or two to take on these roles that are traditionally male. Just because I am able to have a helmet and walk a certain way it doesn’t matter what I am beneath it. As long as you have those skill sets they’ve been looking for.

There’s also a bunch of little parts, different village characters, sometimes I wear a mask so you don’t see my face. I’ve been able to play a lot of characters, die many times - I’m not sure how many times!

Another little tiny indie film (wink wink) you were part of - "Captain Marvel". What was that experience like?
That was kind of like my first introduction to being on set of a major film. So I got to be a 'Skrull' which is one of those green characters, alien-like.

How long of a process is it for you to get your makeup on - and your costume on?
We got it down to maybe 3-4 hours. We got to be in prosthetics too, we were up at 3 a.m., getting things tacked on our face just to play that part all day out in the dirt. There was a lot of wirework involved in that which was a lot of fun. They have a whole grid above you that just looks like spider web. Essentially of just wires that yank people across the room.

You are busting some stereotypes with your work!
It’s been a pretty special thing actually to really think about it and see. I’m kind of part of this new generation where Hollywood is figuring out what a strong female looks like on film. Like in "S.W.A.T." [the TV show] there was a group of us females that were doing a jewelry heist. And we were in full on riot gear so you can’t tell who it is. But within that episode at the end they revealed it is a woman. It happened to be me that they shot.

How did being a track star at Redmond High School prep you for being a stunt woman?
So growing up I did rock climbing, swimming, track. Through that, I realized that you really are only responsible for yourself and your own success. Being part of those individual sports you’re able to kind of cheer on or support other people around you without comparing yourself to them. But only want to better yourself.

When you’re not on a movie set how many hours a day are you training and what are you doing?
Most of the day, pretty much every day I’m training or in the gym. I usually wake up, do some yoga, do some Crossfit and some martial arts as well. Balintawak is one main one I’ve been able to do. It’s a Filipino martial art - it’s very reactionary so just kind of keeping up with skill sets that will translate to film.

Why are you so passionate about your work?
Obviously the physicality is great. But at the same time I kind of like the camaraderie that comes with it. You kind of get to be part of a bigger story you get to work with friends, play pretend.