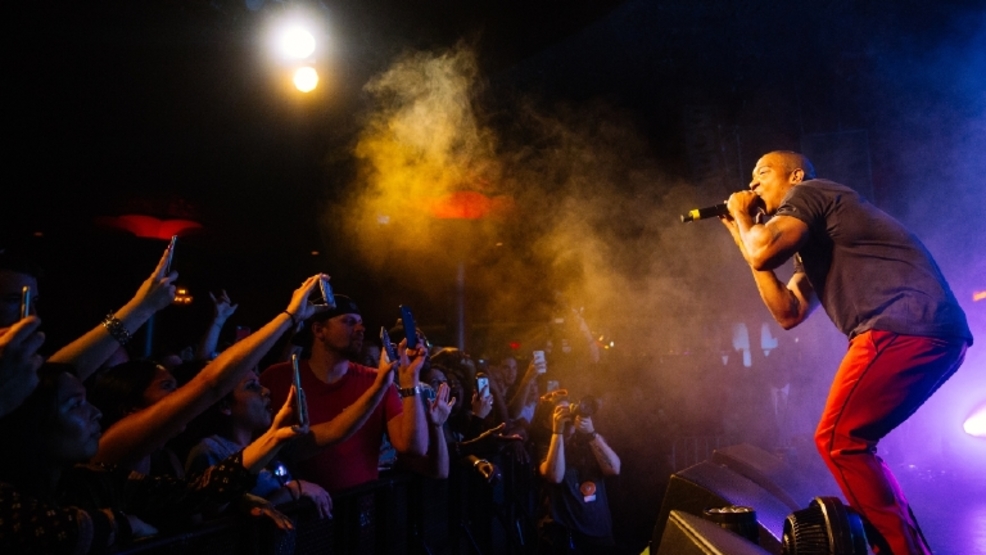 Fans recall their favorite memories at The Showbox

Seattle's Showbox has been temporarily saved by the city council and we are EXTREMELY thrilled about it After rumors of a Vancouver, B.C. developer coming into our city to tear down the music mecca, locals went wild.

Now, the city has 10 months to develop a solid plan to keep the Showbox in business.. So in the meantime - I have asked a few friends to share their favorite memories and stories from nights spent at the Showbox. From crazy mosh pits to seeing favorite artists and everything in between, here is our love letter to the Showbox.

Have a funny story you'd like me to add? Holla atcha girl!

It was Halloweekend. I was dressed as a sexy Maverick from Top Gun. Super original right? I didn’t really want to go to this concert because A) I didn’t want to drink and B) I was super tired and wanted to go home and sleep. Alas – the Showbox called to me, and my girlfriends and I went to see Snakehips. When we pulled up, the concert was sold out and I begged the bouncer to let me in. I had dragged my tired/inebriated butt downtown and I was not about to leave without a fight! After continuous nagging at the bouncer and floating a 20-dollar bill in front of his face, he told me to go to Blarney Stone down the street and wait 15 minutes. I obliged and went to the bar and waited. I was nervous. 15 minutes later, the bouncer comes to the bar to rescue me and hands me a free wristband. It was electric and Snakehips was one of the best concerts I’ve gone to.

First concert I ever went to in Seattle was a Lupe Fiasco concert at the Showbox. This was around senior year of high school. A few friends and I jumped in my car and took off up the 5 towards the Emerald City. The entire way we had every track from his albums on blast, getting ourselves pumped up. We were in the carpool lane at speeds well above what would be deemed legal. Out of nowhere debris covered the air and all I heard was tires screeching and cars fish tailing left and right. A huge plume of tire smoke and dust engulfed the street. In the midst of it all I dived left following suit of the car in front of me; but it was too late. A semi had blown a tire and a sizable chunk had made direct contact with my right front bumper. At the time, all I could think was f***! Still after a quick check, and the support of my fellow entourage, we pressed on towards destiny. Nothing was going to stop us from enjoying what we considered to be an experience of a lifetime! Though I must admit, amidst the team rallying to get our spirits up, I was still left in dismay. All I could really think about was how much trouble I would be in.

On top of that, having never been to the venue, I was draped in more clothing than anyone should ever be in. Once at the venue we cut through the crowd as if our lives depended on it. Dipping and swerving through the sea of equally enthusiastic fans; left, right, spin around, this was our BeastQuake run! Alas, we managed to touch base at the very front. Just then the lights dimmed and flashed, strobes and fog lit the heavens. Our pupils dilating and shrinking rapidly. Goose bumps racing down our neck and arms. There he was! It must have been as hot as an oven in there because I was drenched in sweat. My Indian complexion probably shimmered like a turkey on a Thanksgiving table. However, at that moment nothing mattered; sweat, ringing ears, loss of voice, the tire incident, literally everything that could be considered a burden vanished. All that mattered was this moment and the friends I had beside me.

The Showbox will always hold that special memory for me. That was only one instance for me. I can only imagine what stories those old walls could speak. The joy it has encompassed and the people it has brought together. Seattle does need more housing, but at what cost does it make it justified, if a city brought up in noise is hushed to silence.

I have seen The 1975 live more times than any other musical artist in my lifetime. And it all started at the Showbox at the Market.

I was a recent graduate working part-time, so I had the day off to help a friend in need. That friend had just returned from driving home from The 1975’s Portland show and had already saved her spot in line outside the Showbox for their Seattle show that night. With plans to go to Silver Platters for the band’s special appearance before the show, she needed someone to save her spot in line. That person was me. I sat on the sidewalk in the rain (Seattle in April, ugh) for hours listening to 13-16 -year-olds freak out over this band from Manchester. I only knew (and loved) their song “Chocolate” (WHAT A JAM!), and all of the youngin’s rolled their eyes when I said that. It was their most popular song by far. My bad! I crushed my body against the barrier with my friend until about their second song and had to retreat to be an old person in the back against the wall. The band could probably see the neon hot pink British flag on my Forever 21 sweater. I had absolutely no idea that I’d go on to see this band play live in Portland, L.A., San Diego and three more Seattle venues – each bigger than the last. But it all started at the Showbow at the Market.

I was stoked to be one of only three photographers approved to photograph Marilyn Manson’s live show at The Showbox, even if we were only allowed to shoot the first song of his set. With only a few brief minutes to cram our cameras full with as many frames as possible, the anticipation was high. Manson got on stage and of course the whole experience was surreal, as I low-key fan-girled out, photographing one of my favorites. One might interpret that when photographing the first song, you can continue shooting until the second song starts. But as Manson finished the first song and bantered with the crowd, I walked backward out of the photo pit—still shooting—and he made direct eye contact with me and my camera. I knew then that I was in for it. He jumped off the stage and started running towards me like when a dad chases his kid playing the boogie man. Scared, I turned and ran...straight into a security guard. Manson and the guard definitely had a great laugh on my behalf, while I managed to get away with a more memorable night than I could have ever expected. Plus some great photos. What a ride.

Dan, my best friend from high school, and I walked up to the Showbox on this night for MxPx's 25th Anniversary show with Five Iron Frenzy & Slick Shoes.. We were now 34 years old watching a band that was more or less the soundtrack to our teenage years. The memories flooded into our conversation, discussing which album was their best (I voted for the "Ever Passing Moment" while Dan contended it was "Life In General"), and wondering if we still had it in us to jump in a mosh pit.

This night was special because my very first show at the Showbox was MxPx with Five Iron Frenzy & Slick Shoes when I was 16. This was also with Dan. 18 years later it was the two of us at the Showbox, watching the same bands, with the same enthusiasm as a 16-year-old punk. Stories like these, and countless others, is why we need to preserve these places where memories lie through music.

Oh yeah, we did mosh and were sore the next morning. Worth it.

A nearly inseparable pairing from my formative years, when Ja Rule and Ashanti announced a co-headlining tour stopping at The Showbox, there was no doubt in my mind I would be in attendance. Upon its nearly immediate sell-out, a second night was added and having the chance to photograph both was the icing on the cake. Every track they played was a hit, with their many collaborations drawing unparalleled excitement and interaction from the sweaty, packed house of fans. It felt like family in that room, The Showbox playing host to back-to-back nights that no one would forget.

It was a night like any other, with a mostly pretty mature crowd. The Cars were yet to come to the stage and I was in the pit in front of the stage working "the barricade" position, as I was eyeing the crowd, not expecting any problems from this "experienced" crowd of music lovers, making certain everyone was having a good time, I was flagged down by a male patron probably in his mid 50's, we will call him George, I walked over to George to see what the problem was and he was pointing to the guy behind him (we will call him Richard) telling me that he (George) had just been peed on by the guy (Richard). So I pull George forward to look behind him and sure enough his leg is wet and there is liquid on the ground between him and Richard, and Richard is still hanging out of his pants. I ask Richard if he peed on George and he said "No, it wasn't me". I told him George's leg was wet, so is the ground and he was still hanging out of his pants, - Richard still denied that it was his doing, at this point, I told George to hold on just a second and called in extra security to have Richard removed from the venue. George was happy with this outcome, and happy he did not "take care of him himself." He was a little damp, but George had a great show the rest of the night.

I have so many memorable nights at The Showbox, it’s hard to pick the best and even harder to remember them all. Being able to see many artists before they ‘hit it big’ over the years, in such an intimate venue, has been truly special. A show that will always stand out to me is My Morning Jacket with M. Ward (maybe 2004?), not long after their album “It Still Moves” came out. The show was packed, had to have been sold out or very close. The band sounded amazing, I just remember the sound filling the entire space in this insane way. It was the first time I had seen them live and was blown away, especially Jim James’ showmanship, running around stage in one of his signature capes. I remember SPIN Magazine (#RIP) was there covering the show and they interviewed one of my favorite show companions, Tim Herrmann (yo Tim!) afterwards and he ended up getting quoted in the article. Just one of those perfect musical experiences that will stick with me forever.