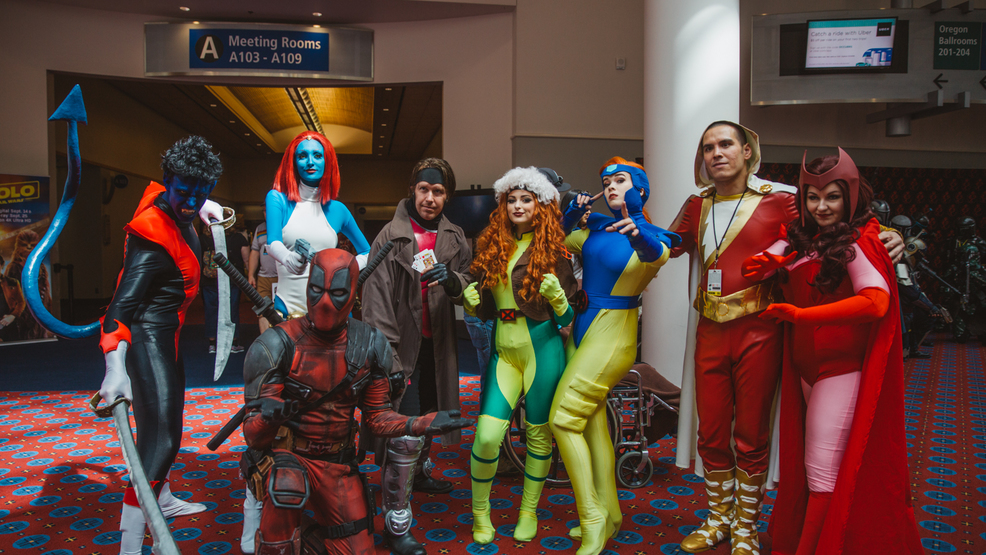 A Geek's Guide to 2020 in the Pacific Northwest

Never too early to save the dates for the must attend, must see and must read events for the year ahead! For the geeks themselves or geeks you love – this year is packed with fun for every level of geekdom.

From free comics to comic cons to blockbuster movies – here are our picks to let your geek flag fly in 2020.

It’s definitely the year of the woman in movies. Our 2020 list kicks off with the Amazon Princess making the list twice!

DC Comics celebrates eight decades of Wonder Woman on the 22nd! An all-star roster of writers and artists team up for this milestone 750th issue packed with stories of past, present and future of the most iconic woman of comics. Stay tuned – Diana of the Amazons makes the list again!

BIRDS OF PREY (AND THE FABULOUS EMANCIPATION OF ONE HARLEY QUINN)

On the 7th, Margot Robbie is back as fan-favorite (and cosplay inspiration icon) Harley Quinn (from SUICIDE SQUAD) teaming up with more DC Comics heroines. The Joker’s former psychiatrist turned lover is blazing her own trail in Gotham City when she collides into a crime lord played by Ewan McGregor in his comic book movie debut.

One of the most anticipated comic books of 2020 is a clash of beloved super powered families. The X-Men have created a new world order where all mutants (only) are welcome. They invited young mutant Franklin Richards, son of Mister Fantastic and Invisible Woman, to leave his parents and join his “family” on the mutant island Krakoa.

Is family blood thicker than X-genes? Which side will Franklin choose. Which side will fans choose? This epic showdown written by Chip Zdarsky with art by Pacific Northwest based artists Terry and Rachel Dodson (see their stunning cover below) hits in February.

Vin Diesel plays a widowed Marine resurrected to be a super soldier powered by nanotechnology. When Bloodshot remembers his past life and who killed family – he’s only mission is revenge. Based on the popular comic book, BLOODSHOT is the first major motion picture from the Valiant Comics Universe.

The homegrown Seattle con turned global geek event returns to the Washington State Convention Center for four days of comic book creators, movie stars, gaming and cosplay from March 12-15. Fans can meet actors from hit shows THE BOYS, THE UMBRELLA ACADEMY, DOCTOR WHO, STAR TREK and more. Do you have your cosplay costume ready yet?

Imagine a teen horror movie but with X-Men. After more than a two year delay, re-shoots and change in studio – "The New Mutants" will finally hit screens on the 3rd. When the original X-Men were lost in space, Professor X recruited a new generation of mutant heroes. The film is inspired by some of book’s classic horror storylines and when one of the students is a teleporting demon queen – things are sure to get scary. Games of Thrones star Maisie Williams plays a mutant who can turn into a werewolf.

Scarlett Johansson returns as Natasha Romanoff/Black Widow in her own solo movie on the 1st.

Set after the events of CAPTAIN AMERICA: CIVIL WAR, Natasha confronts her past as an assassin trained in the infamous “Red Room” and battles new enemies. The latest Marvel Studios film introduces two more Black Widows, Red Guardian aka the Russian Captain America and one of my favorite villains from the comics – Taskmaster.

The first Saturday in May (the 2nd, this year) is FREE comic book day. Check to see if your local comic book shop is giving away FREE comics. It’s the industry’s way of saying thanks to fans, welcome new readers and support local shops. All those blockbuster movies started with power packed pages. Check out the list of titles with something for any fan.

Different shops have different rules. There are limits on how many free books you can get. Cosplay is most welcome and encouraged!

Gal Gadot and director Patty Jenkins reunite for the super sequel taking Diana Prince into the totally awesome era of the 80’s. The Amazon Princess takes on two classic villains and reunites with Steve Trevor, who supposedly died in the first film back in World War One but who cares, Chris Pine is back.

Kristen Wiig will be the character to watch as Dr. Barbara Minerva, Diana’s scientist friend who transforms into savage super villain – the Cheetah!

But what about Wonder Woman’s wondrous new costume! Here’s Gal Gadot as Diana in her Golden Eagle armor as seen in the comic book classic ‘Kingdom Come.”

The Washington State Summer Con welcomes comic book artists, writers and celebrity guests to the Washington State Fair and Events Center in Puyallup, Washington on the 20th and 21st. The guest so far is Kevin Eastman, co-creator of the Teenage Mutant Ninja Turtles. Get ready for your photo op! Along with movie stars, this con recreates scenes from famous movies and famous vehicles from the comic book and sci-fi classic films.

Spinning out of Marvel’s AVENGERS movies, the Agents of S.H.I.E.L.D. have protected Earth from super villains, alien invaders, rogue Inhumans and mad scientists for seven seasons on ABC. This summer marks the final season for Coulson, Daisy, Mack and Shaw. Marvel revealed the team is transported back to the 1930’s tracking mysterious aliens posing as humans. What do they want? Is this really the end for the agents? The final season hits this summer on KOMO/ABC.

So how does the Marvel Cinematic Universe go on after AVENGERS: ENDGAME? THE ETERNALS may be a giant risk for Marvel Studios on the 6th. They’ve assembled a diverse cast including Angelina Jolie, Kumail Nanjiani, Salma Hayek for this cosmic epic.

In THOR, the Asgardians were based upon and inspired the Norse Gods and the Vikings. The ETERNALS inspired the Olympian Gods of Greek legends.

GAME OF THRONES fans will love that two Stark brothers are reunited. Richard Madden plays the immortal Ikarus. Kit Harrington is Dane Whitman, a human who becomes known as The Black Knight.

THE ETERNALS makes several firsts including the first deaf superhero played by a deaf actress.

The Black Knight and three Eternals all became Avengers in the comics so it this film setting the stage for what could be an AVENGERS 5?

Where do I begin? I LOVE DUNE. I’ve read all the books, prequels, sequels.

The greatest source of power in the universe is found only on a desert planet known as Dune. A decades long vendetta between two families explodes leading to war and revolution across the stars.

The story has already been turned a movie and a television limited series. The 2020 DUNE will be an epic directed by Denis Villeneuve with a superstar cast including Timothee Chalamet, Oscar Isaac, Josh Brolin, Dave Bautista, Zendaya, Jason Momoa, Javier Bardem and Rebecca Ferguson.