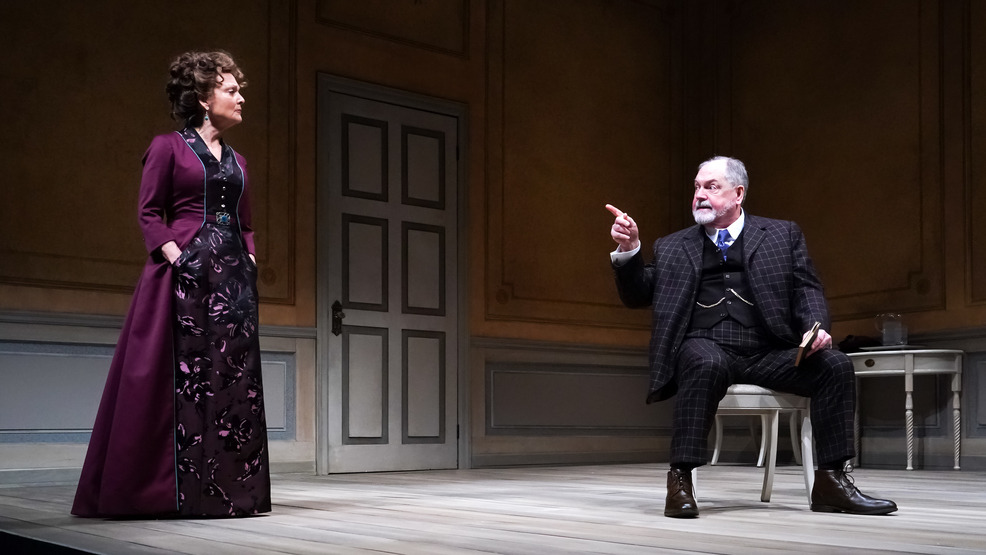 Nora Helmer is returning home after closing the door on her life with her husband Torvald and their three children 15 years prior. Her unexpected homecoming is met with recriminations and the family drama unfolds in this explosively entertaining continuation of Henrik Ibsen’s acclaimed A Doll’s House. Written by Tony Award nominee Lucas Hnath, A Doll’s House, Part 2 explores gender roles and societal expectations through the eyes of a woman mired in an era for which she is simply too exceptional. A Doll's House Part 2 at Seattle Repertory Theatre. Michael Winters (Torvald Helmer) and Pamela Reed (Nora Helmer). (Photo by Alabastro Photography)
SEE MORE

As the door to a house opens, so does a door to the past for the characters in A Doll's House Part 2 on stage at the Seattle Rep.

"Nora comes back fifteen years later, having fifteen years earlier left her husband and children and she doesn't not come back to ask for forgiveness, she comes back to solve a problem," said Reed.

This story is an extension of the play "A Dolls House" by Henrick Ibsen, which was first performed 139 years ago.

There are a lot of conflicting emotions happening here.

"He's had 15 years to sort of ruminate about everything that happened and doesn't expect, I don't think, to see his wife/ex-wife again and then BOOM, she shows up on day, and the battle is on," said Winters. "All of the questions from 15 years ago are rehashed."

The events of the past are examined from different perspectives.

"This is a woman who left home because of the subjugation of women," said Reed. "So she left when a woman makes a move like that it's extremely radical and a hugely political upheaval."

They relish their changing roles.

"The clash is fun," said Winters. "The challenge for me is going over all the old recriminations and then working our way out of it. Not exactly but through it to some degree I guess."

Reed enjoys playing Nora because she has an enormous amount of intelligence and strength, wit, and charm.

"The role is also excruciatingly selfish. She is completely at times disinterested. Supposedly for a person who care so much about other people, she's only thinking about herself. And then like a real person does she flips and shows the magnanimity of her persona," said Reed.

If these two look familiar, it's because they are! Reed played Arnold Schwarzeneggar's partner in the 1990 comedy, "Kindergarten Cop."

She also had a memorable role as Amy Poehler's mom on Parks and Recreation!

"It was wonderful. It's a great great cast and Amy is a dreamboat of a girl. She's smart and caring and we need more Amy's in the world," said Reed.

And Michael Winters lit up Star's Hollow for seven seasons as Taylor Doose in Gilmore Girls!

"I tell you what was great was the reboot because we were all back together like a family reunion. We had a great time," said Winters.

The actors hope you'll come see them together on stage and that a "Doll's House Part Two" will leave you thinking, "Oh my god that was so good," said Reed. "That's what we hope they're thinking about."