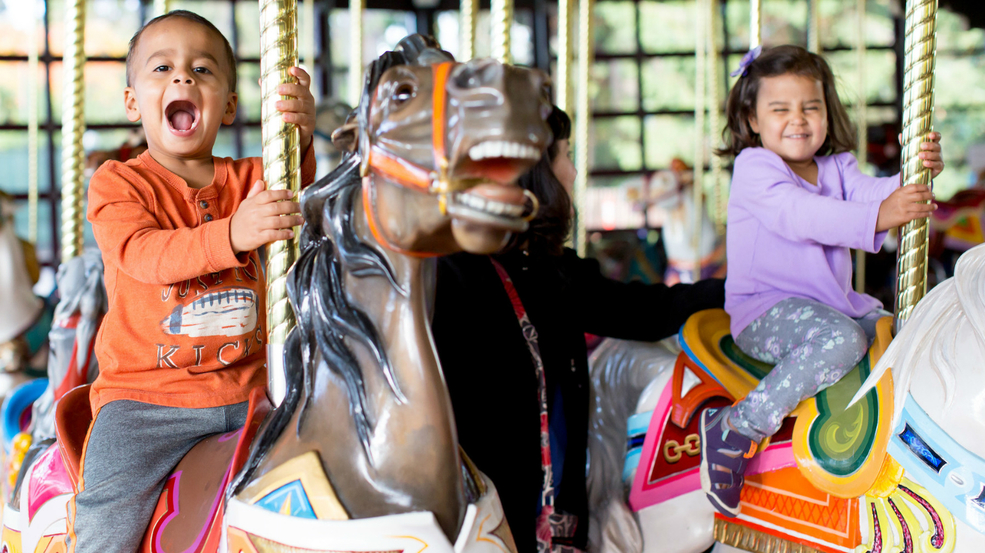 5 of Seattle's Best Carousels to Spin You Right Round

It is sort of sad how much we take the lowly merry-go-round for granted. We see them pop up seasonally at local fairs, downtown or at local malls from time to time, but unless we have little ones by our side, how many of stop and take notice? But many of these are truly works of art and ingenuity lovingly hand-carved and hand-painted.

One of the world’s oldest carousels, built in 1779, still stands in Hanau, Germany. It was quite some time before the modern merry-go-round made its way to the Northwest. Improving on the design, Charles W. Parker built his first carousel in 1892 and started the Parker Carnival Supply Company two years later. In 1904, Henry Auchy and Chester Albright created the Philadelphia Toboggan Company. Today, their work lives on with the carousels that they built still in operation. Here is our tribute to five of the best carousels ever built.

Seattle’s oldest carousel was built by C.W. Parker in 1906 with the 36 horses aboard carved by Eugene Drisco and Leon White. According to Wild Waves, the carousel was purchased in 1921 for a dance hall located in Redondo Beach. Then, the carousel was relocated to various places in the Northwest including Woodland Park and Seattle Center in Seattle, Point Defiance Park in Tacoma and Lollipop Park in Bellevue. In 1980, Byron Betts brought the carousel to Wild Waves in 1980. Running at a top speed of 9 mph, the carousel features 36 jumping horses and two chariots.

Only a few of the 87 hand-carved carousels created by the Philadelphia Toboggan Company were built with the intent of being portable. One of those carousels, #43 to be exact, was built in 1917. In 1923, Earl Douglas brought it to The Puyallup Fair for the first time. With many of the 44 horses carved by John Zalar, this carousel was steam-powered and featured a Wurlitzer band organ. According to Carousel History (http://carouselhistory.com/ptc-43-at-the-puyallup-state-fair/), after traveling on the road for over 60 years, Burback and Bollinger Funtastic Traveling shows donated the carousel and the organ to the fairgrounds. You can experience it during the 2019 Washington State Fair from August 30 through September 22, 2019 and if you are age 62 or older, you can ride it for free!

Who says that merry-go-rounds can only sport horses? Housed in the DeFalco Family Pavilion at Milgard Plaza, just inside the Zoo's front gates, the Paul Titus Carousel was also built in 1917. According to Roadside Architecture (http://www.roadarch.com/carousels/wa2.html) the horses, “lover’s tub” and sled had already been sold off before Paul Titus purchased the carousel in 1994 and then donated it to the Washington Carousel Society. The outer ring of 16 jumping, Parker-styled horses were carved in 1996 while the inner row of 13 endangered species of animals were carved and painted in 2001. The carousel also features a replica band organ.

Built in 1918 by the Philadelphia Toboggan Company, the Historic Carousel, aka PTC #45, first lived at the Cincinnati Zoo and then the Great America Theme Park in Santa Clara, California before it came to Seattle. It was bought and donated by Linda and Tom Allen and the Alleniana Foundation in 2006. It is housed within a pavilion built by Maker Architecture. In 2011, solar panels were installed on the carousel’s roof to produce the 9,000 annual kilowatt-hours required to power the carousel which completes an average of 100,000 rides per year.

The carousel housed within Pier 57’s Miner’s Landing is a lot younger than it looks and features fiberglass replicas of antique designs, but even so, that doesn’t make it any less spectacular. Featuring 30 jumping horses and bright lights, this carousel is reportedly created by Chance Rides and was featured in one episode of Extreme Makeover Homed Edition: The Kirkwood Family.