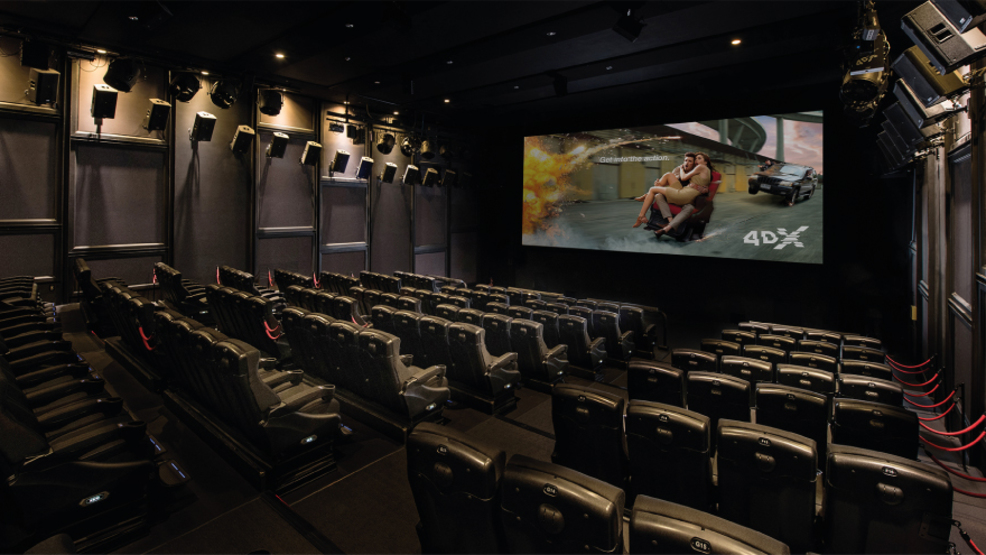 Moviegoers: Did you know Seattle is one of select markets with ScreenX *and* 4DX theaters?

I hadn’t heard of ScreenX before the end of last year when an email came through my inbox. It was my editor asking if I’d ever been to the aforementioned screening room, and if I wanted to write about it. Fingers blushing as I typed my response, I hated to admit that despite the fact that I spend upwards of three nights a week at a movie theater, I had never heard of - let alone been in - any such screening.

Hoping to vindicate myself and preposterously prove my allegiance to the movie-going world (you know, all those people who were offended by my minor ineptitude), I dove into finding out everything I could about this strange, ambiguous "ScreenX", which kind of sounded like perhaps Elon Musk was venturing into silver screen territory. Don't worry, he's not.

What I could gather from Google made it seem like ScreenX was a relatively straightforward concept that had some very obvious draws for audience-goers. As any film lover knows however, you can't replicate the theater experience without actually going to the theater yourself, so I ventured to Regal Thornton Place for a riveting screening of "Maleficent: Mistress of Evil".

(Note: it was not actually riveting; that was sarcasm.)

The seats were smooth and unblemished, a far cry from the well-loved fabric chairs of the theater's neighbors. The room felt longer; its side walls were lighter in color, reminiscent of a padded cell. When the lights dimmed and the film began to roll, at first there was no obvious difference from your run-of-the-mill trip to the cinema. The large screen before me projected the film as usual, and I worried that I was missing something.

Just when I considered checking in with a staff member - it would be my luck to attend the only malfunctioning screening - light flooded my periphery. The sides of the theater illuminated the moving image of the flying Maleficent who soared all the room. The added footage was mainly a continuation of the established set: the rolling countryside, unassuming buildings, the extension of a grassy knoll, et cetera. The action on the main screen was not altered, but the world in which I had entered grew threefold. The additional projectors gave the feeling of being sent into the film itself. It may sound like an overly simplistic idea, but this is the first innovative step forward in modern movie-going memory.

“Right around the time when 3D sales were starting to decline, our team was trying to find ways to get moviegoers back into the movie theater,” said Paul Kim, Head of ScreenX Production. “It was a simple concept: why not use all of this unused real estate inside of an actual theater to immerse the audience into a movie. Expanding the image around you and expanding what you normally see in a movie theater to build your periphery and take you along for the ride, that was a simple concept for us.”

Operating in 29 theaters and counting here in America, ScreenX takes a 270-degree approach to telling the story. The entire film, however, isn’t retrofitted for this format, which some may find jarring. I, certainly, was taken slightly aback every time the extra projectors whirred for select sequences, then went dark for others. In some instances, it became a ping pong match, growing then shrinking as we cut to scenes included in the ScreenX template, then back to the unedited film. Kim, however, says this is by design.

“It might make sense theoretically to do the whole film in this format," Kim said. "But sometimes it’s really about accentuating the set-piece moments in a film to 'wow' the audience that much more and pulling back when you need to.”

The company began testing out ScreenX in Korea - where it was a huge hit. They then turned to Hollywood, striking deals with studios once a film went to post-production. They then send in their team of VSX artists who create the extra footage needed to expand the film along the walls of a theater. They can be tasked with upwards of 40 to 50 minutes of screen time, which can often mean as long as a three-month turnaround. They now operate in 235 screens in 20 countries.

CJ 4DPLEX is the parent company of ScreenX. They also have a completely different, similarly unique movie-going experience, one that I tested out at Regal Meridian downtown with another captivating screening, this time of "Midway". (Sarcasm again. "Midway" is a particular cinematic atrocity. I'm here all year, folks.) It's called 4DX, and it's not unlike that ride at Disneyland your grandparents would force you on because it was air conditioned and didn't involve invoking motion sickness. Anyone remember Michael Jackson's "Captain EO" or "Honey, I Shrunk the Audience"?

4DX is similar, if not an amplified version of those. The seats rumbled and rocked along with the movement in the film. When the boat swayed, so did we the audience. Fighting sequences, exploding bullets, aerial maneuvers. I felt them along with the characters. Bursts of sea flinging up along the ship's side materialized as wisps of water lightly sprayed at my head. At first, the effects were a lot to get used to. I braced for the jolting bits and cringed as my seat unexpectedly dipped. It's not just a little rocking; there is a surprising amount of power in those chairs, and if you don't like carnival rides, then you probably won't like this much either.

Halfway in, however, 4DX's worth became apparent. It added an element to the movie-going experience that many are sure to value. It is a way for viewers to feel the film, and if you like a side of IRL adrenaline with your action movie, then 4DX was made for you. As one might expect, the process of retrofitting a theater to accommodate 4DX is hardly an easy undertaking which accounts for the fact that Seattle only has the one theater that offers films in 4DX.

"We like to convert the entire theater with our chairs," Kim said. "It’s not just a partial conversion. That’s because it’s not just vibration and motion; we have a lot of effects as well: snow, rain, water, fog. In order to incorporate and immerse the audience into those effects, we have to do a complete overhaul of the theater, meaning it’s a much more intensive and time-consuming retrofit. In the end, we feel like it’s worth it rather than doing something partially.”

Innovation doesn't come cheap. These formats will lose, if I had to guess, half of you reading this due to the price tag alone. Theaters are struggling to compel audiences into their sticky seats as it is, leading to the rise in subscription packages like AMC Stubs A-List and Regal Unlimited. ScreenX, which, as previously mentioned, in Seattle is offered exclusively at Regal Thornton Place, runs $18.50 for a primetime showing. 4DX, available at Regal Meridian, costs nearly $24 for a post-matinee ticket. It may not be financially feasible to see every movie in ScreenX or 4DX, but they are both definitely worth experiencing at least once.

“This is the fun part of the job," Kim said when asked what he and his team are working on now. He wasn't at liberty to divulge exactly what they have in the fire, but left it with the question they use as fodder for inspiration. "What can we do to completely blow people’s minds?"

Amidst the COVID-19 outbreak in the greater Seattle area, we want to gently remind our readers that while we’ll still be posting stories as usual about places to visit and things to do in the area, please follow King County Public Health guidelines to stay home and self-quarantine if you are feeling ill or exhibiting sympotoms. If you want more information about coronavirus, please visit KOMO’s resource page.