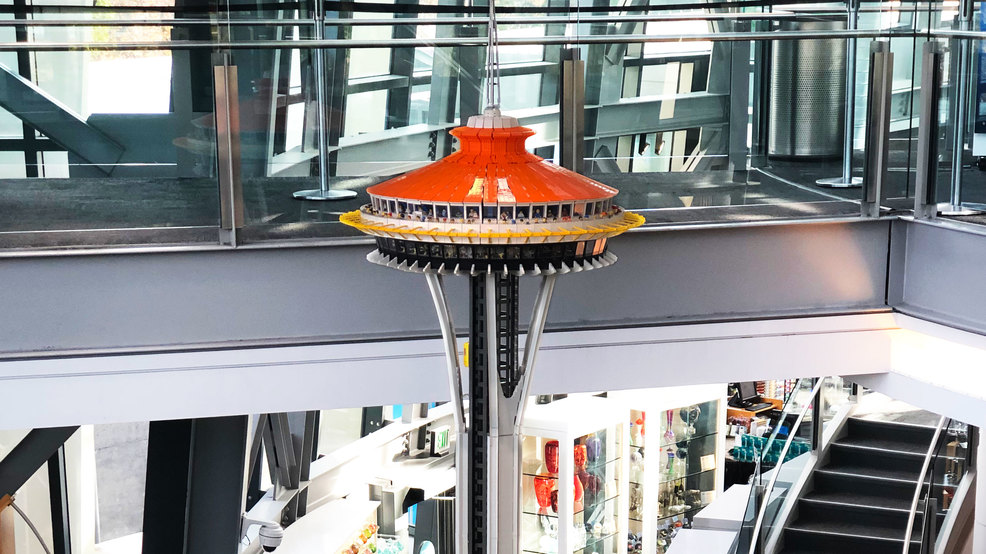 Wayne Hussey, model creator and BrickCon Director, built this model as a reproduction of the famous landmark at is appeared at the World's Fair in 1962.

"I don't really remember when I first decided I wanted to build a model of the Space Needle," said Hussey, "but I almost can't remember not wanting to."

Hussey visited the Space Needle several times and experimented with different sizes, arrangements and pieces to get the model just right. He also studied any books, photographs or magazines he could get his hands on to make it as accurate as possible.

The model is made of almost entirely white, orange, gold and black LEGO parts that resemble the original color scheme of the World's Fair Space Needle.

After debuting this LEGO needle at BrickCon in 2012, Hussey, with the help of Carlyle Livingston II and Thomas Rafert began to resemble the model at the Space Needle in early November.

The latest additions consist of LEGO characters looking down at guests including the likes of Batman, Santa, Mrs. Claus and two of the Space Needle glass cleaners who inhabit the observation deck!

The model will be housed in the needle gift shop for the foreseeable future, but definitely put it on your list of things to go see!