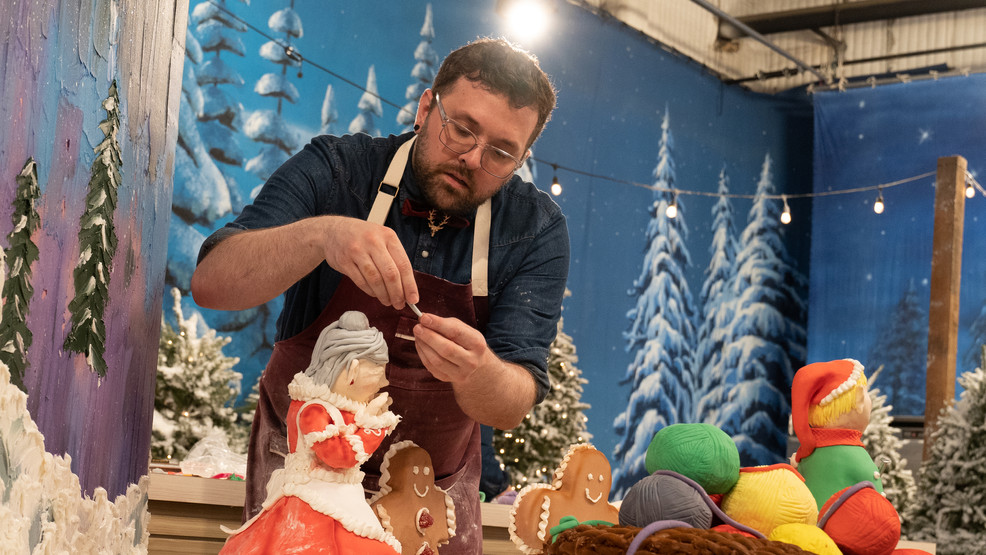 Kyle Smothers' and his team knew they were underdogs on "Holiday Wars."

"My team went into this last challenge with two losses and scraped by in round one due to a technicality," he said. "We didn't let that get us down. We adapted. We overcame, and it shows in our final piece."

"Winning this competition is indescribable," the Seattle pastry chef said. "It is the culmination of the successes we had, the failures we had in which we grew from, passion for what we do and the love we developed for each other during our time on Holiday Wars."

It's unclear if Kyle Smothers is a psychic, but he definitely predicted his future.

If you're watching Food Network's "Holiday Wars," you've seen Smothers in action — he's one of four bakers on Team Mistle Toasters competing on the show.

"Holiday Wars," hosted by Raven-Symoné, is in its second season with episode three airing this past Sunday (Nov. 15). The competition started with five teams of bakers and pastry chefs working together to make larger than life holiday-themed creations.

Smothers is a pastry chef and the co-owner of the Seattle-based handcrafted cake and cookie company, Home Economics. Originally from the east coast, baking is something that's always been in his life.

"I have very fond memories every year, my cousins, my siblings, my aunt, mother and I would get together and do big holiday bakes," Smothers said. "Every Christmas, we would do a whole day of cookies, baking and decorating. And I always joke that it was the Christmas that my sister got her toy oven, you know, that's when I took over and found the love for it."

Smothers has been making his way through the industry since he was a teen, living and working for different companies in several states — learning from professionals and absorbing as much knowledge as he could before earning a degree in baking and pastry from Keiser University in Sarasota, Florida. At one point, about six years ago, he landed in Seattle but moved away shortly after. He said he always wanted to come back and set down roots.

"Seattle is where I fell in love with the most," he said. "I love that it's so progressive, and there's lots of opportunity for success in my field."

"Holiday Wars" isn't Smothers' first time on the small screen — he competed in the 2019 Girl Scout Cookie Championship. But this is his first time competing on a show in a team.

"I mean, it’s nerve-wracking; it’s like the Olympics of baking and pastry world," he said.

Shooting for the show began in August, and each team was made up of virtually four strangers since teams were assigned.

"Being introduced to three other personalities and skillsets that I am not familiar with, it was full transparency - what are you good at? What are you not good at?" Smothers said. "Your weakness is not a weakness unless we don’t know about it. If we know what you are capable of and what you are not comfortable with, we can work around it."

For example, Smothers said he is more of a buttercream artist than a fondant artist, which is a major part of creating these sculptures — noting how "it takes a village, and multiple skill sets to create these displays."

One of his favorite memories from the show (in the three episodes we've seen so far) was when he hand-painted the night sky of a display during the first episode, also noting the yarn in the display, a nod to his life as he likes to knit.

Each episode has two rounds, with one team sitting out of the second based on their performance in the first. During the second episode, the first challenge was to create Santa's sidekick. The Mistle Toasters created a cute green alien dressed in a Santa outfit, but it ended up falling apart.

The Mistle Toasters sat out of the next round.

"I was really hurt when we were benched; it stung, of course, there was some pride," Smother said. "But being able to sit out and watch what was going on with the rest of the competition in the penalty box allowed us to see how others team were adapting and reacting and being successful with the same challenges we were having."

And that's the energy he and his team carried through the show — adapting and overcoming, which was particularly evident in the following episode. During the first challenge, which was to make a Thanksgiving turkey in disguise, the Mistle Toasters created Lotta Stuffing, a drag queen turkey. This was another example of Smother's incorporating his personal life into the show since he is a former drag queen. The judges had nothing but positive things to say about the display, and they moved on to the next round.

Smother's described being on the show as an "absolutely wonderful" experience that led to life-long friendships but was also a challenge mentally.

"When you're there, your focus has to be 100 percent on what you are doing because you have to be able to point out the things that could make an alien fall apart," he said, laughing. "It was scary, it was stressful, it was exciting and wonderful and fabulous, and I would absolutely do it again."

Could it be one of the other Food Network Baking Championships? His own show? Only time will tell.