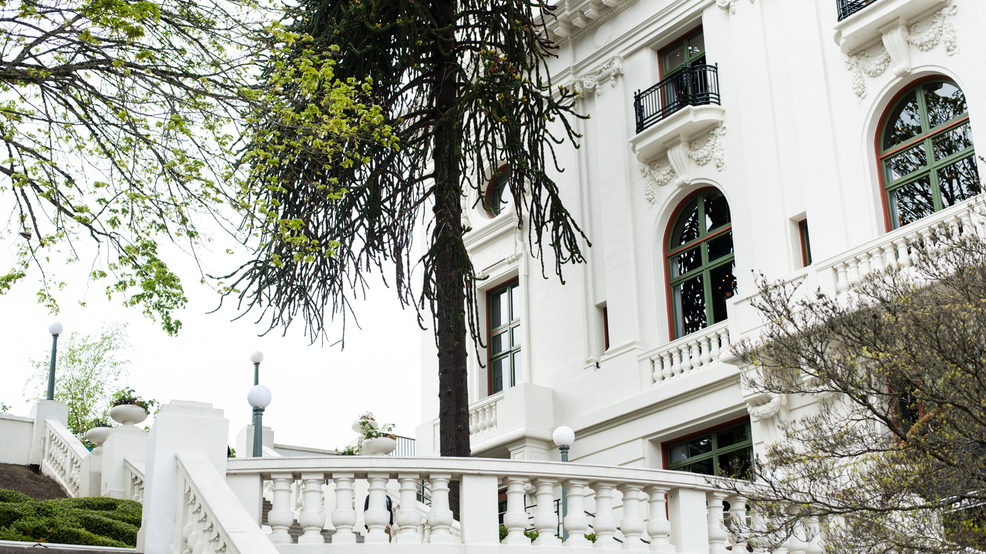 After years of waiting, the Elks Temple, McMenamins newest property, is opening its doors this week in Tacoma. The 1916 Elks Lodge building has been renovated into seven floors packed to the brim with artwork, gorgeous light fixtures, and graffiti by local artists. Tacoma will now have five new restaurants to choose from including The Old Hangout and its waterfall and tiki-inspired decor, the tapas style Spanish Bar located off the Spanish Steps, and The Pub with views of Tacoma that can't be beaten. As if that wasn't enough the Spanish Ballroom will be bringing music and events to the Elks Temple. Before the festivities begin we got to take a sneak peek of the Elks Temple before the April 24th Grand Opening. (Image: Elizabeth Crook / Seattle Refined)
SEE MORE

A beautiful building, constructed in the classic Renaissance Revival style, stands tall right in the heart of Tacoma's historic district. It's an ode to the past - and a celebration of the present.

"The Elks Temple originally opened in 1916 for $100,000 - which would be about $2.5 million dollars today," said Matt Osborne, manager of the newly renovated McMenamins Elks Temple in Tacoma.

"The Elks grew to where they had 3,200 members, and they needed their own building here in Tacoma, so they moved in here and they held the building all the way up until 1969!"

Osborne has been part of developing many properties for McMenamins. But the colorful history here makes the Elks Temple truly one of a kind.

"From about the mid-80s until about late 2009, it just sat empty and just got ran down, graffiti-ed, destroyed," he explained.

Eventually, McMenamins bought it. Even though it was pretty run down, they saw potential - and decided to make it someplace special.

"It’s as much about history, music and art as it is food and beverages," he said. "When you look around, and look at all the paintings and all the different stories, everything in this building is a representation of what Tacoma was and will become."

Osborne took us on a tour of some of the highlights of this seven story wonder, staring with the bar in the basement that's a real taste of the tropics - The Old Hangout Bar.

"It is an island-themed bar with a small menu, different style foods - mostly like tacos and small bites, steak, hot dogs with peanut butter - kind of fun things," he said. They also do a lot of craft cocktails like Mai Tai's and Hurricanes in these great, funky glasses."

There's even a waterfall!

"The waterfall is where the old pool used to be in the original Elk’s Temple," said Osborne. "Every time you sit in a different spot, you’re going to see something new."

Next up - The Spanish Ballroom.

"This is the ballroom that’s been here since this building was built in 1916. Now it's used fora music venue," said Osborne. "We do music every night of the week - some shows are free some are national acts."

"This is our Spanish tapas bar, we focus on gin and tonic-style drinks," he said. "This is one of our family friendly restaurants, so you can bring your family in here. We also have the Spanish Steps outside where we do some patio seating."

The wooden bar has some special history.

"Mike and Brian McMenamin had this bar in storage for quite some time, and then they decided - 'Well this venue, this spot is actually perfect for this bar,'" he said. "And when they moved it in, they didn’t realize that the bar had actually been made in Tacoma, Washington but when they put it into place but it fit perfectly!"

There are hidden spaces that you have to hunt for here. As we leaned against a wall - we literally fell into a secret hallway.

"Like every great building, there is a history to this building that included graffiti artwork," said Osborne. "So when McMenamins bought it we wanted to bring back the graffiti artist that did the original tagging when it sat empty. There are a couple of different spots in the building, this being one of them, this is the hallway that leads to our secret bar– The Vault."

The Vault is a secret speakeasy.

"This is our hidden speakeasy bar in the middle of the Elks that you have to come and find," he said. "You’ve got the secret wall that gets you in there, but once you’re in here - this is a great little speakeasy where we focus on whiskey drinks."

The bar is located under the city streets of Tacoma - people are literally walking on the street/ceiling of this cool spot.

"Right above us is Broadway," said Osborne. "This is one of those fun little things we’ve added to a lot of our locations, so we make people come find this place and when they get in here, they don’t want to leave."

Of course we had to get one of their signature drinks, called the Blind Pig Sazerac, which was delicious.

Confession time - we did get a little bit lost in the maze of hallways. There are doors painted "The Way" and "The Other Way" - it's a little bit confusing -and a lot of fun!

Upstairs are the beautiful bedrooms, each one unique.

"In every one of our rooms - we have 45 hotel rooms here at the Elks - and every room is named after somebody with some sort of historical ties to Tacoma."

McMenamins hires different artists in the community in addition to the artists that work for McMenamins. The headboards in each room, for example, are individually painted. No two are alike.

After all that walking around, it was time for some grub in the pub. From the art to the architecture, that rich sense of history literally hangs in every nook and cranny here.

"We want it to be a community gathering space more than anything," explained Osborne. "People to come see their friends, we want people to hang out, check out the artwork, the music, have a beer, talk to each other, get away from the maniac world that we got outside and to come inside and to have a good time."

It may have started as an exclusive Elk's Club, but now the McMenamin's Elks Temple - it's open to everyone to enjoy and make memories.