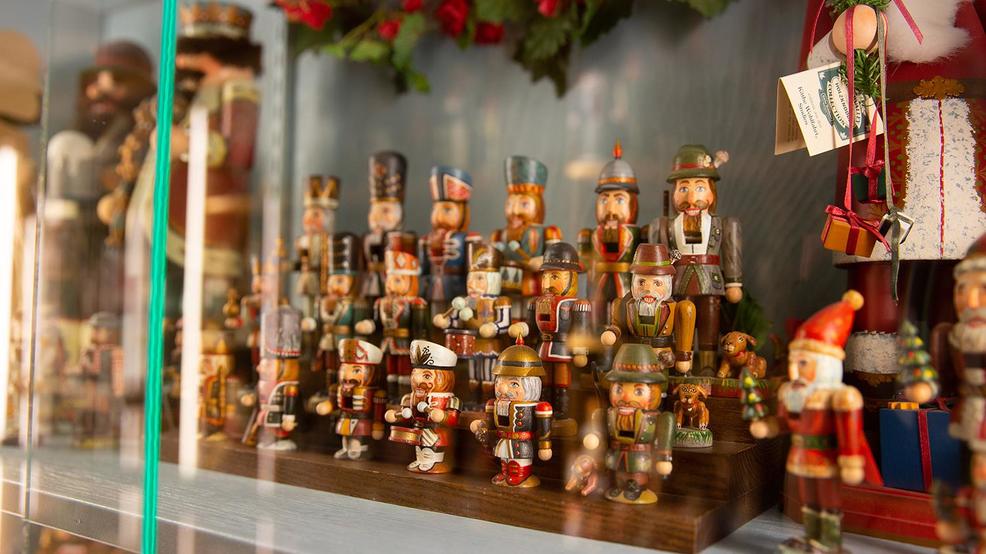 'Tis the season for Nutcrackers galore! We took the trip to Leavenworth to visit the world famous Nutcracker Museum and boy was it a treat! Arlene has made it her life's work to collect nutcrackers from all around the world. You will find antique, modern and even nutcrackers dating back to caveman times. After viewing the awe-inspiring work we took a little gander around the sweet Bavarian town that is Leavenworth. (Image: Gena Wynkoop / Seattle Refined)
SEE MORE

At this world famous Nutcracker Museum in Leavenworth, people go nuts for nutcrackers! The utilitarian and decorative devices are at the crossroads of engineering and art. There is dazzling array of styles and colors - in fact, are over seven thousand different nutcrackers here.

It all started with George and Arlene Wagner. Today at nearly 94 years old, Arlene runs the museum.

Her passion for nutcrackers started in the 1980's when she was a dance teacher. Arlene and husband George put on the "Nutcracker" ballet.

"When we did our first one in 1980 it was even before Seattle ballet did their first one," she said proudly. "My husband played Mother Ginger. So we got very interested in the nutcrackers at that time."

They didn't know it at the time, but that was the beginning of The Nutcracker Museum.

Wagner remembers that time well. "When we got ready for the ballet we went around town - went around Seattle looking for the best nutcrackers for the ballet and we saw all of these big mouthed big toothed characters and we just kind of fell in love with them."

That's when the couple began collecting them and creating the Nutcracker Museum! Soon others were donating their nutcrackers too. Now, they're on display here. Arlene showed us a few of her faves.

"We have the lever nutcrackers dating back to 1500," explained Wagner. "This one is from right at 1500. Here's a couple more 16th century ones. We have a number of 17th and 18th century nutcrackers that are lever.," she continued. "We have the antique ones that are screw. This one right here is the earliest known dated one. From 1631."

Pro tip - people have literally been trying to crack nuts forever. "We even have the nutting stones from prehistoric times," said Wagner. "Four to eight thousand years old."

Arlene does have a fave among the older nutcrackers. "Oh yes. My favorite is this monk with lamb right here. And it's beautifully done, 17th century."

And there's Karl. At over six feet, he's one of the larger nutcrackers. Turns out all the ladies LOVE Karl.

Wagner gave us the scoop. "Oh he is very handsome and very popular. All the ladies have their picture taken with Karl."

We were wondering-- does this giant nutcracker actually crack nuts?

"Well he could sometimes when they come they put a coconut in there," said Wagner. "We discourage them," she said laughing.

From the giant to the teeny tiny. She showed us some of the smallest nutcrackers in the collection.

"They have to open at the mouth in order to be even classified as a nutcracker," she said. Wagner showed us one that was so itsy bitsy that it was hard to spot. "That little tiny one is 5.1 millimeters and he does open."They seem large in comparison, but there are even a few that literally fit in walnut shells.

There are nutcrackers from fifty different countries here-- including France, Switzerland, and England.

She showed us some special nutcrackers from Italy. "These five right here-- when you lift the handle to carve the nut, the eyes change color." So cool!

Of course-- many are from Germany! One case contains nutcrackers from four generations of the same family.

"This is Otto Ulbrich," Wagner said. "And the birds up there that you see where made in 1933. His son, Christan, opened his shop or workshop in 1982. And after Christian passed away, his son Gunther took over and these are the first ones that he made. And now Gunther's son, Stephen, has made his first nutcracker."

The very modern looking nutcracker featured a man holding a skateboard... and a beer! "Well of course that's what young people are like nowawdays isn't it." said Wagner with a twinkle in her eye.

There are even special nutcrackers carved in the likeness of Arlene and George.

She and George shared a passion. "I think that we argued about the most in our married life was you have that one-- no I don't," Wagner said laughing.

And of course-- it was always about nutcrackers.

Although George passed away... Arlene is continuing their legacy of sharing their love of nutcrackers with others. Everyone, including little ones, Are welcome here. They're encouraged to do nutcracker hunts.

It's fun for Arlene to expose the joy of nutcrackers to kids. "The children love them. That's why we have done all of these things down low. All of the Disney, different fairy tales, and we have Snow White and the Seven Dwarfs." They even have nutcrackers that look like characters from the Wizard of Oz.

So could 'The Nutcracker Lady" ever tire of nutcrackers? No way! "Oh how could you, with all this variety? No no no," exclaimed Wagner. "When I find a new one or an antique dealer gets a hold of me with a new find it's excitement all over again."