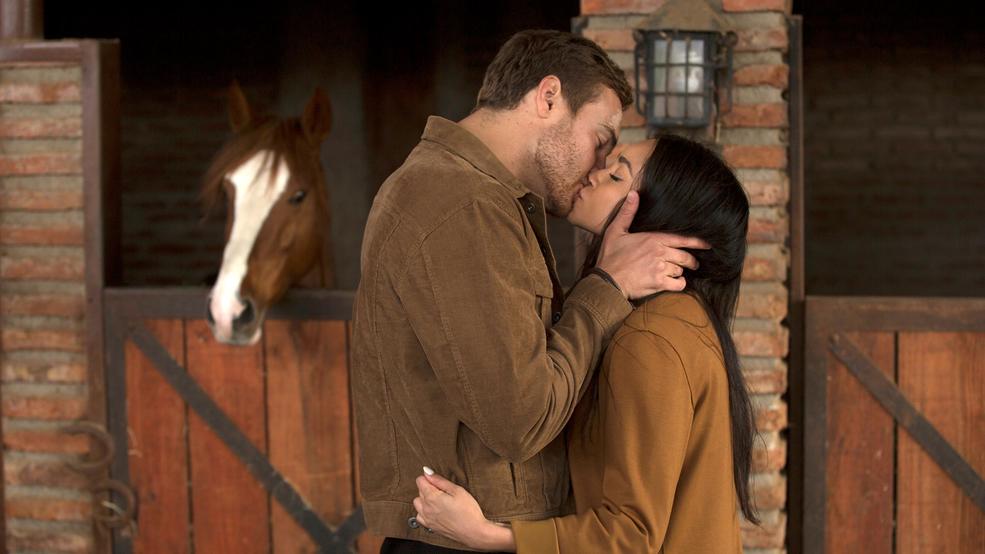 Rose Recap: Things are about to go DOWN on Hometown Dates

Brandon: Tonight on 'The Bachelor' it's finally time for hometown dates. But first, we’ve got to talk about last week’s episode. The Final 6 women and Peter continue their tour of South America in Peru and it's time for a bunch of One-on-Ones and then the ol’ Three-On-Ones to see who gets the hometowns.

Jenna: So Madison gets the first One-on-One date, which is not shocking. This is the one relationship where everyone is like, 'Okay this could be the one'. We definitely think she’s going to be hands down in the Final Three at least, do we know she’s going to get a Hometown Date. Everything is going great but then Madison, I don’t want to say drops a bombshell on him, but just kind of says religion is very important to her and that might cause a problem in the future it’s looking like.

Britt: Yeah so Madison says she’s looking for someone to essentially be the spiritual leader of her household, like her father is and Peter kind of slightly stumbles through it a little bit and says 'Yeah, I’m not as close with God as I’d like to be but' – and then he drops the bomb, his own bomb, which is that he says he’s falling in love with Madison.

Brandon: Peter kind of plowed through the really important question which was Madison broaching this subject of religion. Didn’t really give her an answer, just said 'Hey we're going to come back to that later' and then was like 'Hey I’m in love with you'. And Madison, by the way, did not reciprocate that. So we’re going to see the religion thing come up again in hometowns. Everything is fine right now, but the waters are about to get rough.

Jenna: So then we go back to the women all talking, and Natasha is clamoring for a One-on-One date as well. She’s never had a One-on-One date with him and she has a lot of catching up to do. So Natasha finally gets what she wants, finally some One-on-One with Peter and they kind of have a nice time, there’s not a lot of making out, they dance in the street as the Bachelor usually does. He ends up not giving her a rose and I’m not shocked by that.

Britt: So then we're on to yet again, another One-on-One date. Next up, Kelsey - who I think we all have strong feelings about.

Jenna: Kelsey, no one really likes her. There’s kind of a back and forth, do you like her? Don't you? She’s had drama. Does she have a drinking problem? Does she have a pill problem? But Peter really does like her, and they have a lot of fun on the date, but you can’t help but have fun. They’re on ATVs in the hills of Peru and then they start making out on a hillside. And he’s definitely, hands down falling for her. He was going back and forth I think in his head, was he going to give her a rose? But then she opened up and tells her life story a little bit more, how she doesn’t have a relationship with her dad and I think Peter would just be a jerk if he didn’t give her a rose, let’s be honest.

Brandon: Two things here. One: They don’t air the talk about Kelsey’s family unless that comes up again next week when they’re in Iowa and they’re at home. Because Kelsey has said her dad is not going to be at the One-on-One. That she’s started to cultivate a relationship with him after a bunch of family drama, and that she has not told her mom or her sisters about this, so guess what? She’s about to tell them on national TV. Number Two is I’ve gone back and forth on Kelsey all season and by the end of this episode I’m convinced that she might be the only one who’s ready to have a relationship with Peter. I think that she’s also the woman that we have learned the most about this season and I think she might have gotten a little bit of a light Bachelorette edit. I don’t think she would be a good Bachelorette, but they’re definitely giving her a good look on this show.

Jenna: Let’s be clear about something, no one on this show is going to be the Bachelorette. No one is good enough to be the Bachelorette. 90% of the women watching this show do not want anyone to be a Bachelorette. So everyone is now looking to past seasons, because this is probably the first time you’re not pulling for any of these women and I think that’s why this season is getting a bad rap a little bit. Because you’re not really rooting for anyone. So you do want Kelsey though – you like Kelsey because you feel bad for her?

Britt: So the One-on-Ones are out of the way. Now we’re down to the 3-on-1 where there’s only two roses, and someone is going home.

Britt: When Kelley and Peter are together, Kelley points out a relationship can be fun and easy it doesn't have to be traumatic and Peter precedes to say, "Is this jus fun for you?"

Brandon: Straight up, I don't even care if Peter finds love.

Jenna: Victoria and Peter basically have an argument and start fighting. She’s like 'You’re always in a mood when you hang out with me'. And he’s like 'No I’m not, I’m not in a mood'. Oh my god, if you’re already doing this conversation?! That's a six month in conversation. We’ve all done that, we’ve all been there. But the fact they’re already doing that on this show, on tv - Peter, abort this mission. You’ve got to let Victoria go. But he ends up keeping Victoria and I don’t really get it because they’re already arguing, so that makes no sense to me. And then he ends up keeping Hannah Ann, which isn’t shocking either. But then Kelley ends up going home and no one is more shocked by it than Kelley.

Brandon: Hannah Ann precedes to pull out a piece of paper with a list of all the reasons why she loves Peter. Now it's adorable but its like, high school adorable.

Jenna: I think that's giving Hannah Ann a lot of credit that the letter came from high school. It looked like a 6th grader wrote it.

Brandon: After she gets the rose Hannah Ann cries tears and not just a little but sobs, like maybe she's in too deep.

Jenna: Basically Kelley going home was kind of a shocker, I thought she would have been around a little bit longer although I don't think he could have handled her family, they are a bunch of lawyers he would of been interrogated and it would have not been pretty for a person like Peter. Now we have the Hometown dates tonight...and we are also going to learn tonight that things are not good with Victoria...