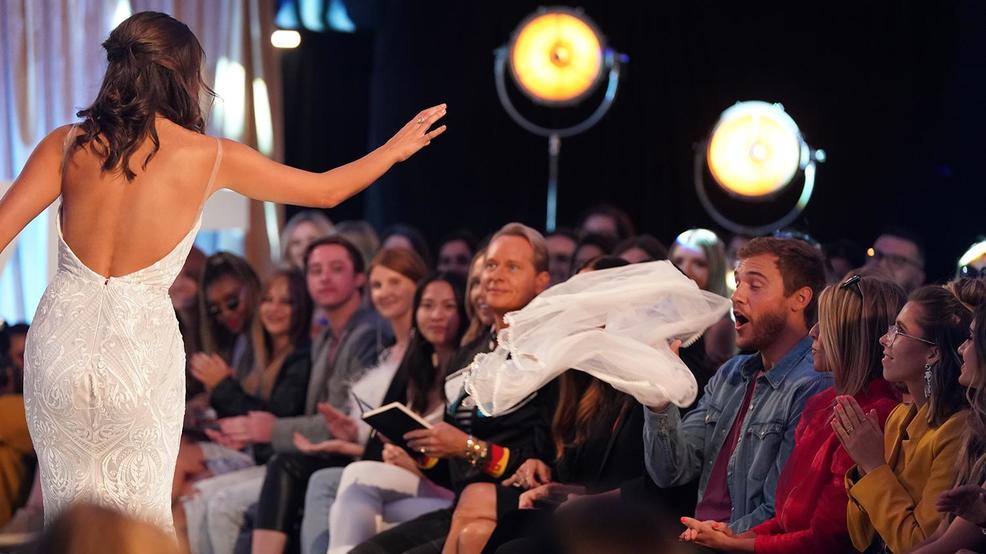 Hold your breath! Peter and Hannah B. pick up where they left off, with a conversation full of unresolved feelings for one another. Will Peter invite Hannah to join the other women? Or will he continue on his new quest to find love? How will he face the nine women who were on the group date, anxiously awaiting his decision? The Bachelor airs Mondays at 8 p.m. on KOMO 4. (ABC/Eric McCandless)
SEE MORE

Oh, Peter. At the end of the very first episode of the season you let your dirty little secret out. The secret that is going to plague audiences for the entirety of the rest of the season, as you attempt to make new connections and fall in love again.

And not only that, but she's giving you little hints here and there that she's not over you too. That's the kind of dangling hope that can keep a man alive for moooonths. So yes, while he flirts, flies and full-on makes out with the other women - in the back of my head, at least, is the knowledge that his heart is back in that windmill.

The "cliffhanger" episode from last week - "Will Hannah Brown stay?" ended as we all knew it would: No, she didn't stay. We knew this for practical reasons: This was filmed several months ago, and we all know that Hannah went on to film and win "Dancing With the Stars". As talented as she's proven she is, there is no way she could be on two shows at once, much to ABC's chagrin, I'm sure.

I'm personally Team Hannah, and more importantly: Team Hannah & Peter. The chemistry is still there, the angst is still there, and the puppy-dog eyes Peter gives her pierce my soul. I was pretty impressed when Hannah admitted she didn't know whether she is tied up about Peter himself, or the "What Ifs" from her season. I think she's trying hard not to lead him on, while still feeling a pull towards him. While Hannah seemed interested but not fully invested, Peter comes off as 100 percent committed, which is why it's cringeworthy to see him say goodbye to Hannah, and then go tell the rest of the women on the Group Date that he's totally over her and ready to move on.

Yeah.....sure. Tell yourself what you gotta, bro. And he does! He essentially spends the rest of the day and night on an apology tour, repeating that he's over Hannah, and ready to move on - to anyone that will listen. Maybe if he says it enough, someone will believe him? This gal certainly didn't.

The women are bummed and pissed, but what are they gonna do? Leave the show and their shot at Instagram sponsorships love? Exactly. So they grumpily whine to Peter, which is a great look - btw, and get over it.

The momentary drama that exited when Hannah B. did leaves a vacuum that Kelsey, heretoforth known as Hot Mess Express, is all too happy to fill. At first, it's drama we all know and could see was coming from miles away: "Can I steal you?" drama. So-and-so steals him at the wrong time, or too many times, or not enough, or not in the right way. It happens every season, and it's truly the dramatic bread and butter of the show.

What' different this time around is the reaction-to-situation ratio. Kelsey's reaction to Mykenna "stealing" Peter at the beginning of the evening instead of later in the evening is incredibly disproportionate to what it seems has happened. And she's not even mad that Mykenna took time with him, she's mad at the timing of it? Mykenna looks as shocked as the rest of us and moves on, as we all hope to do. Ah, we were so young and ignorant back then. Back before Champagne Gate.

Because looking at Kelsey's actions, we should have known something else was brewing. But how could we have guessed at what actually happened?

The long and the short of it is this: Kelsey brought a bottle of champagne from Des Moines that she got on her birthday last year, to share with Peter. She set up a little area outside of the mansion for them to sit and enjoy it together, and then she went in to find him. He was with Mykenna at the time, when Explosion 1 happened. When Mykenna finished, Kelsey was so busy blowing up at her that she didn't notice that Hannah Ann swept in to grab Peter next. She takes him to a secluded spot where she finds a whole date set up, champagne and everything. Probably thinking it was a Bachelor producer set-up (and no one behind the cameras telling her otherwise, btw), she pops the champagne with Peter. Kelsey's Des Moines birthday champagne.

Kelsey hears the pop from inside the mansion, and explodes herself. She is positive that Hannah Ann knew this was her champagne, and did this to spite her. While I am by no means a fan of Hannah Ann's, I do not think that she would do that on purpose. What possibly motive could she have? This is the Bachelor Mansion, champagne bottle are LITERALLY EVERYWHERE. But no, this bottle was irrationally special to Kelsey. She goes OFF on Hannah Ann, calling her a "b*tch", "princess", "selfish" and "manipulative" among other things.

Peter looks confused as all get out, and takes Kelsey gingerly aside (he honestly looked a little fearful). The funniest part (to me) of this whole experience is that, as he's trying to figure out what's wrong with Kelsey, he actually bumps into another champagne setup. Like, they're LITERALLY everywhere. He jumps on the chance to try and help her recreate her lost moment, and what happens next is as swift as I've ever seen karma move. Kelsey goes to swig straight out of the bottle, and it explodes all over her face.

If she hadn't been such a b earlier in the episode, I might have felt back for her at this point. Kelsey devolves again into a fit of hysterics, alternating between feeling bad for herself and her predicament, and throwing massive shade at Hannah Ann - who, in her defense - has tried to apologize to Kelsey multiple times.

End scene. Next up is another Group Date, where the ladies are going to be participating in a fashion show with clothing brand Revolve, coached by celebs like Janice Dickinson and "Queer Eye" alums. When the prize for winning the fashion show is announced, I have never seen contestants on ANY season of ANY franchise be more excited about the prospect of winning. And it has literally nothing to do with Peter, or spending time with him. The prize is the entire Revolve wardrobe of clothes - which is HUGE. It truly is an amazing prize. If you're not going home with the Bachelor, going home with thousands of dollars of cute clothes is a pretty phenomenal "back-up" plan.

The women pick the outfits they are going to strut their stuff in, and it becomes clear that this is not only Hannah Ann's dream challenge, it's where she feels most comfortable, where she prefers to be, and where she's the most confident. She's beautiful, she knows it, she's a model - so she's literally been told it over and over again. She has no issues walking the runway, and you can tell her extroversion thrives for this kind of attention.

Victoria F. on the other hand, is not Hannah Ann's level of confident. She seems more introverted, and is terrified to put herself on display in front of a large audience (and America, let's not forget she knows there are cameras capturing every moment). She ends up pulling all her courage together, and doing a sexy little strut in lingerie down the runway, and planting one one Peter at the very end. Totally outside her comfort zone, but something she felt she needed to do - probably to be more like what Hannah Ann was giving.

Despite all this, Hannah Ann still wins the competition, and all the Revolve clothes. Can't blame the judges, she worked the stage like it was her job. Spoiler Alert: It is. It really put me off to see her attitude up there when she and Victoria F. were doing their final "Walk Off" though. Hannah Ann is dying for every last moment of attention to herself. She's flipping her dress in front of Victoria, and when they both reach the end of the stage to walk back - Hannah Ann fakes out Victoria, and then loops back to get one final curtain call all to herself. It was rough to watch.

The difference in reaction to this challenge from Hannah Ann and Victoria F. was actually really interesting, and something I don't think we've seen much of on this show. It wasn't just the "I'm scared to do this challenge" schtick that we've heard a thousand times. It was, at the core, two very very different kinds of women trying to figure out how to play this game. Hannah Ann is meant for this show. She's beautiful, extroverted, desperate for attention and loves the camera. She has no shortage of confidence, and seems to light up every room she's in, and draw all the energy out of it. Versions of her are the majority of the contestants on the Bachelor: models, personal trainers, actors/singers, pageant queens, etc.

Then there is Victoria. She is also gorgeous, but she doesn't "know it" quite like Hannah Ann does. She seems introverted, quieter, and not as outwardly confident as Hannah Ann and those like her in the house. She's not desperate for attention, and even seems to balk at drawing it to herself. The two times she's tried to play the game and be someone she's not, it's backfired and felt foreign to her. Her entrance from the limo with the "dry sense of humor" line was obviously a suggestion from a producer, or a friend - and she was so uncomfortable saying it she could barely get it out. Then the lingerie strut down the runway, and grabbing Peter to kiss him - just didn't ring true to her persona.

This is all to say this. There is one general, stereotypical version of a woman in the mansion. And that woman looks and acts like Hannah Ann. That woman usually wins the seasons, and definitely gets all the screen time, sponsorships, and offers to be on Bachelor in Paradise. So what about every other type of woman out there? Those more like the Victoria F.'s, who know they need to play the game to "do well", but struggle internally with it?

But let's not get it twisted, I still think Hannah Brown is somehow coming back at the end of all of this...