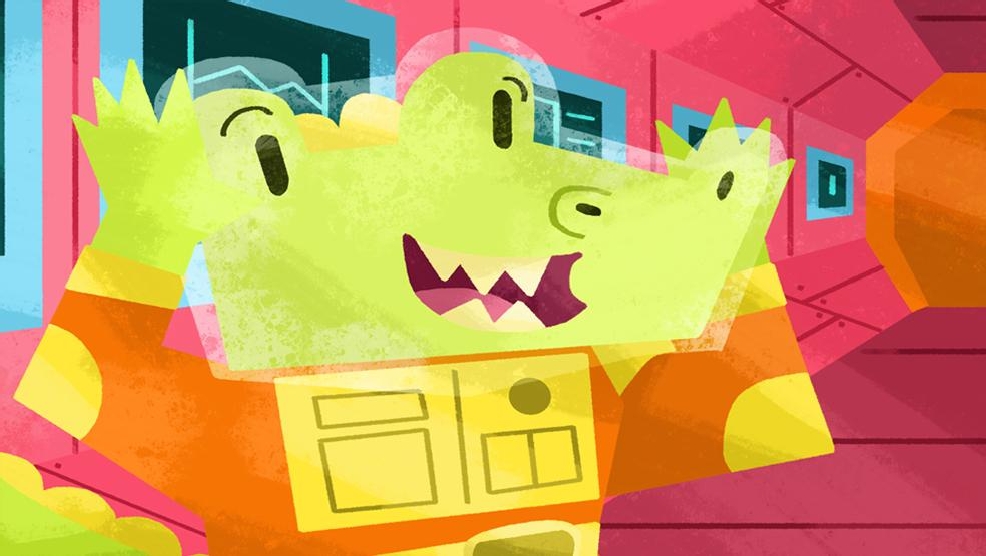 Artist of the Week: Tyler Parker

Seattle might be notorious for niche coffee shops and scenic waterways, but locals know it's also home to an array of people who love to create. This city is chock-full of artists and we want to showcase their work on Seattle Refined! If you have a local artist in mind that you would like to see featured, let us know at hello@seattlerefined.com. And if you're wondering just what constitutes art, that's the beauty of it; it's up to you!

You may have seen his work at Emerald City Comicon or in the children’s books section of Amazon. If you have seen them around town, you’d recognize his very colorful and geometric web illustrations, but Tyler Parker’s work didn’t always look this way. For Parker, drawing started out as a hobby in school, much to the dismay of his teachers in upstate New York. After attending a summer arts program which made art seem like a real career path and vocation, he attended Maryland Institute College of Art in Baltimore and began to paint, collage, and threw himself into printmaking. A couple years in, he ended up in an illustration class and it “just kind of stuck”. With a BFA in Illustration, he jetted off to the University of Brighton in the UK, this time studying Sequential Design and Illustration.

After embarking on an ambitious graphic novel and biting off a little more than anyone should chew (60 pages in 3 weeks using only gouache) his previous judgements against digital disappeared. I caught up with Tyler to ask more about how and why his work came to be the cheerful explosion of color and adventure it is today.

Seattle Refined: A lot of your illustrations feature animals or characters who are not-quite-people. Could you elaborate on why that is?
Tyler Parker: For quite a while I was really interested in lifestyle stuff and fashion work, the sort of stuff that you would see in something like Nylon, GQ or Wired. While working on an assignment that specifically had to be for kids I ended up drawing a bunch of fox people camping and it just kind of stuck. I’ve always drawn creatures but had never really thought of them as a legitimate option. It’s also a lot easier for me to draw animals than people, it’s mostly psychological. As soon as they were one step away from being people it was fine. When I worked on my last kids book “I Want To Eat Your Books” the little zombie boy was always much easier for me to work on than everybody else even though he’s just green and has weird eyes.

Every single illustration I’ve seen is extremely bright. Is everything you do that vibrant?
Despite having gone through on all-black phase in high school, [color] is something that I’ve always been drawn to. To this day I don’t think I actually own any black clothing, so color is something that’s really important to me.

It looks like you’ve been doing more comic-style graphic work but you have worked on a few children’s books. Did you know the author or did they reach out to you based on your web presence?
For books, I’m usually working with the publisher so I work most closely with the editor or art director. They’ve seen my work somewhere and will get a manuscript to reach out and see if I’m interested in illustrating. I will start with character sketches and from there I’m kind of old school. I still go through a lot of the process I used in college. Rough thumbnails on paper that look pretty much like scribbles to anyone but me. I will color the whole book and receive feedback/revisions before I get to work on finals. Then more edits and approval before they send it to the printers. 6-9 months later that book comes out.

My favorite character has to be Salvatore Alligator from “A Cheesy Space Adventure”. What character(s) are you most personally attached to? Which would make the best drinking buddy?
I think that the character I go back to the most is probably Eleanor, my fox ‘Indiana Jones’ type character. I’ve used her in a few comics and have more plans to use her in the future. Most of her adventures end up being snack based so that’s something that I can relate to. I mostly work in kids books (so there doesn’t tend to be a lot of drinking) but I recently started making a series of custom tabletop RPG miniatures called “Dungeon Creeps” with things like Orcs and Goblins. I think if I could actually keep up with them, they’d probably be a good time.

Where can people go to see your work?
You can visit my website or my tumblr which is where I tend to post more sketch and ‘in progress’ work. You can buy copies of my books on amazon or prints of my work on Inprnt.

Are your short comics available for purchase? Would you turn your characters into a stationery set, etc?
I usually sell my short comics at shows. I just did Short Run a few months ago, and I have some at Phoenix Comics & Games on Capitol Hill in their local artist section. I would love to turn my work into more products, stationery, pins, whatever came along.

And lastly, how do you take your coffee?
I don’t drink coffee and only occasionally drink tea.