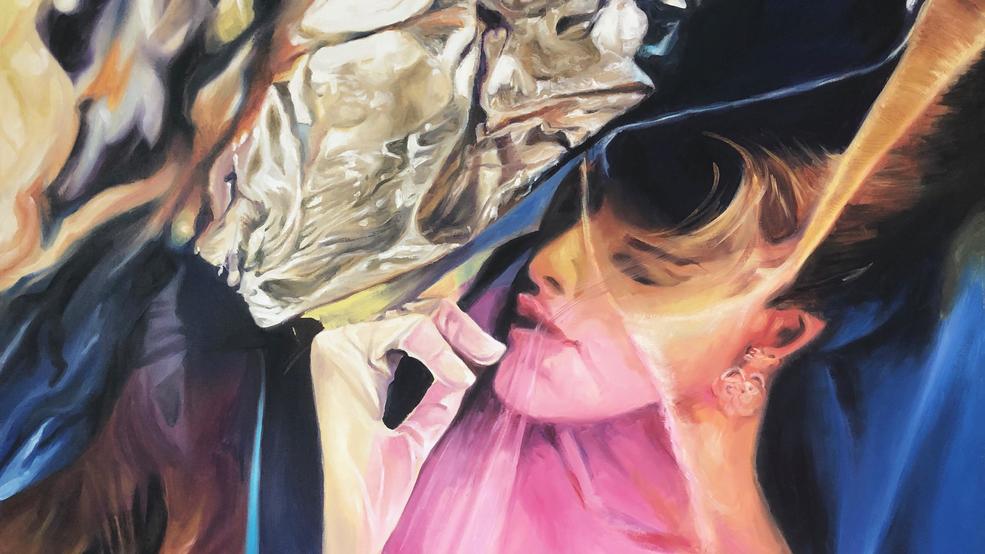 Artist of the Week: Tatiana Garmendia

Seattle Refined: How long have you been creating? Do you work with other mediums?
TG: I sold my first painting when I was 13, a tacky ritual cloth depicting a ravenous tiger mid-leap. It was acrylic on red satin! No velvet for me, even then. I haven’t stopped painting since. I still use acrylics, though more often I paint with oils and watercolor. I also have a vigorous drawing practice, and experiment with film and photography plus installation, so you could accurately describe me as interdisciplinary.

Can you tell us about your artistic process and how the different stages work into it?
Think of me as a visual Jungian. I use the body as the measure and expression of everything– myths, nature, culture. Everything. I do this by experimenting with different psychological personas in the studio to arrive at archetypal identities. I dig deeply into the human psyche in search of images with universal speak. I begin by doing a lot of research. Say, for example, my current preoccupation is with the Philosopher’s Stone and bridal images in a series I call "Alchemical Bride."

In alchemy, the Philosopher’s Stone can turn base metals into incorruptible or noble ones, but I look at it in terms of psychological symbolism. So it’s not about turning lead into gold, but about turning the muck of our lives into the sources of wisdom, of growth and even splendor. So the persona I construct and centralize to express this archetype is the bride. Bride with a capital B! In Jungian terms the Bride functions as a metaphor for individuation and self realization.

In the midst of the #MeToo movement, I felt it critical to celebrate the elevated female body, imagining the liminal bride as a site of transformation, to go from a victim narrative into an empowering one. For my own sake, for the sake of my friends, my nieces, my students, my neighbors, you know? I needed to reimagine the female form and its historic erasure as the actual source of value and meaning in painting and in life, brush-stroke by brush-stroke. And then my research supported my obsessional kinds of synchronicities emerged.

For example, alchemists called the ovens in which they did their experiments “Houses of the Chick” and “womb” and that play on words just thrilled me. I’m no different than every other female who has either survived sexual predation directly or has a best friend who has, or a sister or mom who has her own story to tell. Well all that research led me to go and collect more than 1,000 images of brides that I cut out and put into “solar ovens” that I construct. These weird alchemical constructions become the images that I explore in paintings, drawings, photos and film.

Tell us about where your inspiration for your art come from?
I look at our cultural legacies, at history, philosophy, mythology as the inspiration for my work. No disrespect to artists who wax poetic about blank canvases, or bliss on variations of white paint, but they’re dozers. I’m just as bored by conceptual antics, like Maurizio Cattelan's much discussed banana at Art Basel. Those spaces hold no creative or intellectual interest for me. Maybe because I am a child of political asylum, a woman, a Latinx, maybe because I am too used to living and working in the farthest peripheries of power and influence, a perpetual outsider, these seem the domain of the entitled and the privileged. There are too many critical issues in our collective lives today to be debating about how many angels can dance on the head of a pin, which is what such musings sound like from my perspective. Give me the messy space of our conflicting moral intuitions, the charged images bubbling up from our collective unconscious, the shifting boundaries between the personal story and aggregate historic accounts. That’s where I’m going to find inspiration.

Do you have a specific “beat” you like best – nature, food, profiles etc?
I’ve been really getting into permaculture recently, the whole idea of balancing our relationship to nature and to each other while preserving/creating diversity. I’ve got all these funky heirloom seeds drying right now that I collected this autumn from beans and pumpkins. Not a single squash from my harvest looked like another, it was sheer vegetable anarchy. No idea what my seeds will grow next year because I’m a pretty undisciplined gardener. I let the breeze and pollinators do whatever without interference.

Do you have one piece of art that means more to you, or is extremely special to you?
I emotionally let go of my art as soon as it’s shown. There’s a distancing that happens once it’s out there living its own life in the world. Think the traveling gnome in Amelie.

There’s only one piece that still holds deep ties to my heart, it’s titled Beforehand/Afterwards and it’s from the Migrations series. I can’t really touch the piece without breaking down in tears, so usually my husband is the one who packs it to travel for a show. It’s an installation piece featuring an embroidered blanket draped over an empty chair, and above it, a photo of me wrapped by that blanket against a black ground. It’s a standard issue military blanket embroidered with the torture techniques that the Castro government used on my father in Cuba. They also happen to be techniques the US government uses on inmates at Guantanamo Bay. We came to this country as political refugees. And while my father tasted freedom here, he never fully recovered from his torture and he died at 36. You can imagine the personal sorrow and sense of political betrayal this piece represents

What experiences in your life have affected your art the most?
Being an immigrant. Being a woman. Both experiences have initiated me as an Other. It’s made me observant and curious, made me want to find out ways in which we are different and in which we are alike.

If we want to see more of your work where should we go to find?
My website tatianagarmendia.com has a trove of art on it. I usually post once a day on Instagram @tatianagarmendia_art and post both finished films and studio experiments in my YouTube channel.

How do you take your coffee? We ask everyone!
As a bean, wrapped in chocolate.