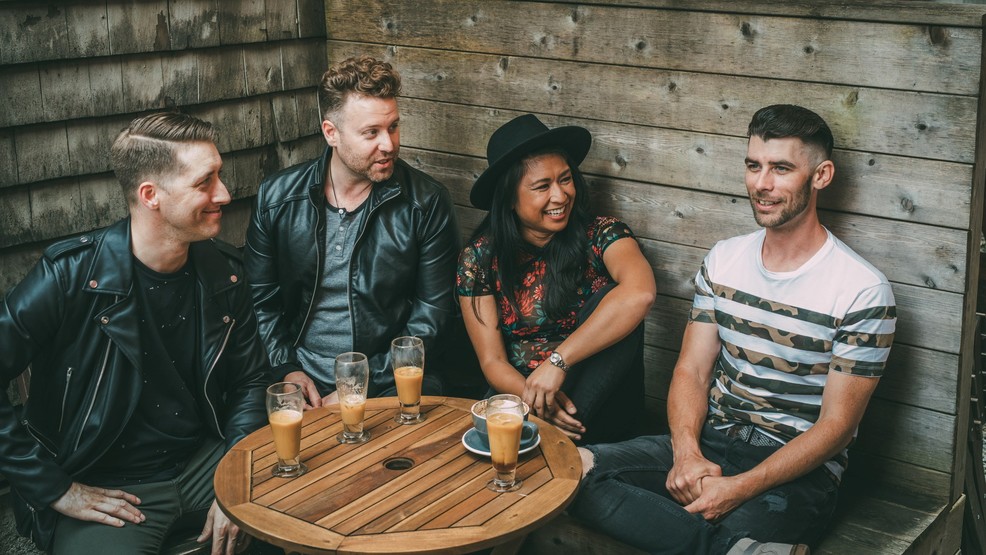 Artist of the Week: Marsalis

Seattle Refined: How long has the band been around/writing together/performing?
Dennis: Since 2014. Met Theresa through Adam and have known Adam for many years.
Theresa: I was introduced to Dennis back in 2014 through Adam. I think we played a few coffee shop/restaurant shows together as a trio. We played covers and some of Dennis' original music when he was a solo artist. The chemistry was so good that we all decided to create Marsalis in 2015 and started writing music together that year. We released our first EP in 2016.
Adam: The three of us have played together since 2014. Dennis and I have been working together in one group or another for around 15 years now, whether it was a full band or just him and I breaking these down acoustically with just guitar and stand-up bass. Theresa and myself have played together around 7-8 years in different groups.

Tell us about the artistic process and the different stages that work into it
Dennis: When it comes to songwriting I present a pretty full idea to the group, melody and song structure chords etc. We then flesh it out and discern the direction of the song and how it fits.
Theresa: Smart phones are an amazing aid in this process! Ideas normally start by exchange of audio text messages. We'll recorded piano bits, guitar bits, vocal ideas on our phones and texted each other. You can tell when we all get excited about an idea on how fast we all respond to each other. For the most part, Dennis comes up with a melodic idea and sends it to Adam and I. Adam and I will take his idea and work on how we want the song presented aesthetically; for example, what mood or emotion do want this song to bring out from our listener and what types of sounds/instruments will get us there? Once we all come to an agree on that, we'll go to the studio and start tracking with our producer, Evan Morgan. He's awesome by the way! I feel like he understands our creative process very well. You know when you're talking to an good friend and they know what you're going to say and they finish your sentences? That's what Evan is to us; he totally gets what we're trying to say...even if we're not communicating verbally, but musically.
Adam: Many times Dennis brings an idea to us that he’s working on and we flesh it out together, make some tweaks/play with the structure, build it out to feel like a full song. Sometimes he just brings us a fully completed song ready to rock! That’s always a crazy moment listening to the idea of a song that’s completely done already, the first time he brings it to us. Other times Theresa and I write songs together. It’s always interesting /challenging when you know the basic structure of a song, but then you need to describe to everyone how you want it to sound as in.. how it will sound on the record vs how it will sound at a live show. Maybe there’s a certain way you want the song mixed to give a certain vibe that’s different from the vibe you get when playing in a room together as a band at rehearsal.

Where does your inspiration come from? What other music artists do you take inspo from?
Dennis: I try to stay inspired by a lot of different types of music. I grew up listening to The Beach Boys and admire how Brian Wilson crafted songs and try to apply that to my approach to songwriting. As far as lyrical content is concerned, I am always trying to find ways to always be honest in my approach and keep a hopeful message, even with darker content.
Theresa: I'm appreciate a lot of different music. What inspires me musically are the sounds of the instruments more than the melodies or lyrics. I'll focus on how the instruments make me feel. If the sounds are nostalgic and brings up a certain memory or feeling, good or bad, it'll leave its mark on me. I am inspired by artists like, John Mayer, Alicia Keys, Coldplay, Imogen Heap, 30 Seconds to Mars, Prince, Michael Jackson, Gallant, DVSN, 1975, plus more.
Adam: I’m inspired by all kinds of music. I grew up on country, some of the absolute best story telling/song writing out there. My first concert was Randy Travis at the fair. I played jazz/classical from a young age and love all kinds of music. I’m usually inspired by top notch song writing. It could be the melody or the story being told with lyrics. Just today I was having a rough morning, nothing was helping. Then I heard the song “Sit Next to Me” by Foster The People come on and my day was turned around 180 degrees. That’s inspiration!

What kind of genre is your music? What kinds of things do you write about?
Dennis: Its hard to say. I think we have a soulful pop sound to most of our songs. Its important to keep pushing the envelope on what your songs represent in sonic quality and position.
Theresa: Since each of us love different styles of genres and we all come from different musical backgrounds, our style as a group is very diverse and it shows in our music. I find it hard to fit us into a specific genre. Is indy-pop-alternative-soul-rock a genre? If so....that's us!
Adam: we’ve been described as indie rock, indie pop, rock, pop rock, alternative rock. I’ve been told several times we remind people of Blue October, Snow Patrol, Better than Ezra, Coldplay, Keane, Dishwalla, Imagine Dragons, Boston. as far as I can remember right now.

Do you have one song that means more to you or is extremely special to you?
Dennis: Right now it is our unreleased new song we are tracking right now. It is a very vulnerable song for me.
Theresa: My favorite song of ours would be Hope. I remember when we all jammed out this song in my garage before we even had lyrics! That was the song that made me think, "Damn...we have something here!" I get excited every time we play this song live.

What experiences in your life have shaped your music/art?
Dennis: Watching my dad play music. He taught me how to play and sing and he is my truest inspiration musically outside of my faith.
Adam: The way we put songs together and collaborate with our music is shaped heavily by our lives. We are all super busy with personal lives. Theresa and I live very far from Dennis. So just the unique way songs come together is interesting. We aren’t the typical band you think of that gets together every week to jam/write/rehearse.

If we want to see more of your work where should we go to find? What about upcoming shows?
Dennis: Our website is a great resource for all of that.
Theresa: You can find more about us, upcoming shows, and our music on our website. You can also stream our music on Spotify, iTunes, Tidal, Amazon Music, Google play, & Bandcamp and so on!
Adam: Monday, Aug 27 at Day One Playfield, 2121 7th Ave. seattle 4:30–5:30 p.m. You can also follow us on Spotify!

What is next for you? Anything you're working on right now that you're really excited about?
Dennis: Heading back to LA then hopefully another show back home in Seattle to cap off the year. Excited to release our newest song and video.
Theresa: We're working on some new music and there will be some shows to be announced soon.
Adam: We are working on multiple shows we aren’t able to announce at this time until details are finalized/confirmed, including one in Hollywood this fall. Super excited for that one!

Lastly, how do you take your coffee? We ask everyone!
Dennis: Drip with heavy cream. Good fair trade coffee too, I like blonde.
Theresa: I'm happy with a simple americano with a little room for cream and brown sugar! Drip will do too.
Adam: I have twin toddlers, so this is essential. Early morning drip with almond milk or cream. Later on, iced coffee with coconut milk, unsweetened.