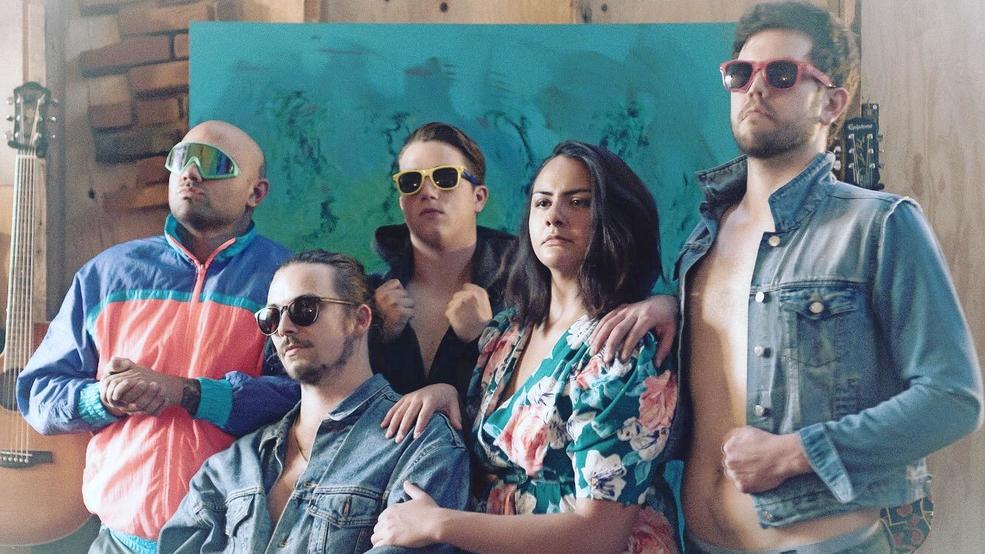 Artist of the Week: BoobooLala

BoobooLala is a local band from Tacoma, Washington comprised of sibling vocalists Kevin and Madisen Dailly, Byron Thomas on bass, Jordan Neal on guitar and Sig Wynkoop on drums.

Seattle Refined: How long has the band been around/writing together/performing?
Kevin: We’ve been together for a girthy 3 1/2 years.
Jordan: I'd say a solid 4 years.

Tell us about the artistic process and the different stages that work into it.
Kevin: We are all just a bunch of goofballs who just happen to play music well together. Personally, I feel weird calling myself an “artist” sometimes. I’m mainly just a person who loves to spread a wild energy to our friends/family/fans (no matter how big or small the crowd may be) with my bad ass band mates who are STRAIGHT SENDING it with me. It’s the best natural adrenaline rush and I love every second of performing.
Jordan: A good 'ol jam session has a big part to do with it in my opinion. It's where we get a lot of our core ideas for songs which gives us the foundation to build and write the from there. It allows us each to really open up and add our own flavor into the musical melting pot we're creating which gives us our sound as BoobooLala.

Where does your inspiration come from? What other music artists do you take inspo from?
Kevin: I love going to shows. You can catch me at a local show almost every weekend. I take a lot of inspiration watching local artists who are out there on the same grind we are. I also take a lot of inspiration from watching fellow show-goers, who are having a good time and smiling the whole night. With our music and performances, I want to keep their good times and smiles continuing on throughout their upcoming week. As far as who I take inspiration from musically... Bruno Mars, Lettuce, Slightly Stoopid, 90’s hip-hop.
Jordan: My family and friends. My parents always would blare lots of classic & '90s rock, also some Marvin Gaye, Van Morrison, and Neil Young. My older brother's Taylor and James got me into hip-hop like Kanye (college drop is my fav) Ludacris, Outkast, Big Krit, and much more. Lately it's local musicians, there's lots of them working hard out here and it's cool seeing them create opportunities for themselves. Also lots of musicians and guitar players on Instagram. It's really motivating to see how many talented people are out there in the world.

What kind of genre is your music? What kinds of things do you write about?
Kevin: Every one of our songs sounds completely different from one another, but you could say soul/funk/pop/hip-hop, a large fusion if you will. I write about having a good time, dancing, short stories, breakups, shake ups, getcho cake ups, you know, the usual. Also lyrically, there are times where I have no clue what I’m even talking about until it’s finished. A prime example of that would be our song “10 Past 9”.
Jordan: Definitely funk rock with pop, hip-hop, and some R&B sprinkled on top.

Do you have one song that means more to you or is extremely special to you?
Kevin: Not really. All of our songs have different vibes/messages. However I do LOVE playing our song “Sideways” because it was our first song we wrote, and it still slaps at shows. I love the way the vocal melodies dance around the beat.
Jordan: Yeah, Disco Lala. Disco Lala is really fun to play on the guitar. Usually I hangout by my pedal board while we perform so I can engage certain effects that add texture and color to our songs. This song doesn't require so much pedal work, which allows me walk around the stage and interact with my band mates more.

What experiences in your life have shaped your music/art?
Kevin: Seeing Slightly Stoopid when I was 17 years old made me fall in love with live shows. I actually didn’t know I could even sing until I was 20. I played drums in my first two bands (shoutout to Vividal and The Approach) and playing drums in those groups shaped me into a better vocalist and musician. It taught me how use drum counts for vocal melodies, etc.
Jordan: Like I mentioned earlier - family and friends. They influenced most of the music I listened to early on. My uncle Bob, he would sing and play acoustic guitar at family gatherings which was always really fun and made me want to pick up the guitar. Also my buddy Derek, we met in junior high playing on the same basketball team, found out each other played guitar and started jamming. He was really good, it really pushed me to get better. We also started making songs together which we had never done before. I really believe that part of my life is what made me love making music and playing guitar.

If we want to see more of your work where should we go to find? What about upcoming shows?
Kevin: We are on all major streaming platforms, Spotify , Apple Music, etc!
Jordan: Facebook Instagram and any major music streaming service! We have some show's in the works, they will be posted all over social media!

What is next for you? Anything you're working on right now that you're really excited about?
Kevin: So we just finished/released our most recent album “Swimwear,” and it was a lot of hard work that helped us grow as a band. But let’s be real we got to record in a beach town down in L.A. and it was the most incredible experience to be able to record with Pepper, a band I’ve listened to since I was 16. That said, WE ARE GOING RIGHT BACK INTO THE STUDIO TO KEEP OUR MUSIC CATALOG GROWING. I also just signed a contract literally five minutes ago to start filming the next music video for our track “I.H.W.” MO MUSIC, MO VIDEOS.
Jordan: Getting prepped to film a music video being filmed this summer and hitting the studio this coming weekend to record a couple new tracks!!

Lastly, how do you take your coffee? We ask everyone!
Kevin: I like iced coffee because I like refreshing cold beverages. Cold brew generally gets me jacked up.
Jordan: Depends on the day. Either nothing in it or a ton of creamer.