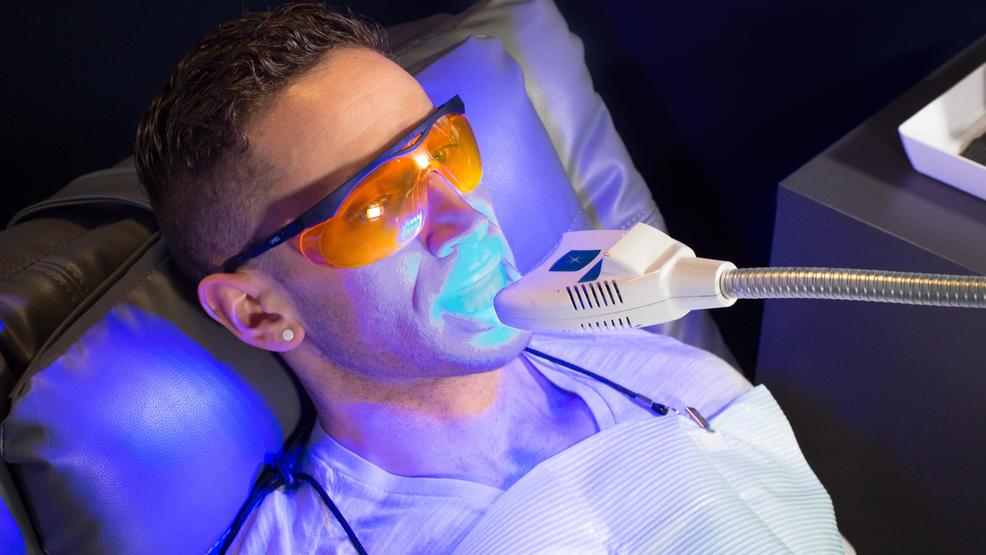 Tired of whitestrips every night? Try one session of LED Teeth Whitening

Next time you're at the grocery store, take a walk down the toiletries aisle and count the number of products that claim to give you a whiter smile.

I've probably tried half of them, easily - and none of them seem to change the shade of my teeth.

Now, some may look at my lifestyle and say - 'Well Britt, you seem to drink upwards of six cups of coffee a day - maybe that is counteracting the whitening you're doing once a day?"

And to them I say...SHUT IT. I want white teeth, and coffee. I don't feel that that's too much to ask.

This is a long way of saying that I CRAVE white teeth, so when a friend told me that there is some kind of LED blue light whitening service offered at Seattle Sun Light Spa I was willing to try anything.

If you didn't already know, Seattle Sun Light Spa is the reincarnated version of Seattle Sun Tan. They've been leaning heavily into the "LED light" phenomenon (you may remember the LED light facial we tried out there a couple months ago), so it wasn't a total shock to us that they were trying their hand at teeth whitening too.

"It fit right in," said marketing director Erin Laroya-Sax. "It's professional strength, but they don’t use hydrogen peroxide, it’s carbamide peroxide - so it's gentle enough to do without a dentist’s supervision."

NO DENTIST? Tell me more.

Each appointment costs $129, and takes around 45 minutes - during which you have two sessions. The first is a whitening session, and the second is a Blueminerals session.

Whitening Session
Using the Bleach Bright product, you sit in the chair with, essentially, a mouthguard full of whitening gel for 15-20 minutes with a blue LED light aimed at your mouth.

"[The light] absorbs all the impurities and discoloration in your teeth, and activates and expedites the process" said Samec Segura, the wonderful spa attendant who walked me through everything. "And the gel opens up the pores within your teeth, allowing the solution to go in."

Blueminerals Session
After the whitening is over, you toss that mouthguard, rinse out your mouth, and put in another one - with more gel. The LED light is still on, but this session is only 10-15 minutes.

"It gives back the minerals you may have lost in the whitening session," said Segura. "It helps re-seal your teeth to prevent any future stains, and restores the enamel."

When you're done, you should see anywhere from two-eight shades of brighter teeth. Pretty phenomenal, right?

So now the big question, does it work?

Pros
Yes, it did work for me. Check out the picture below and in the gallery for my before and after (sorry in advance, I'm not a photographer!) In terms of the "two-eight shades lighter" range they tout, I'd say mine was closer to two, but I'll still take it! Segura even said the whitening would last for about four to five months, and to be honest - paying $129 for whiter teeth for that long is definitely worth it for me. Especially considering the alternative is getting the dentist involved, and upwards of $500 per session (which I've definitely looked into). Or - you know - quitting coffee and red wine.

Cons
It was uncomfortable. If you've ever used teeth whitening strips, you know the slight stinging you can get around your gums when you have then on? Multiple that times 10, and that's what you feel during the whitening session. It makes sense, you're basically cheating the system and doing one huge blasto on your teeth, instead of little mini blasts every night for a month. The saliva buildup in your mouth is also incredibly awkward - you're basically holding an ever-accumulating amount of spit there between your teeth and tongue until the session is over, at which point you SPRINT to the sink to spit it out.

Conclusion
I'm an instant gratification kind of gal - so this, to me, was worth the 30-ish minute of discomfort for months of whiter teeth (especially at that price). If you have extremely sensitive teeth and gums, and have had trouble with the grocery store whitestrips - I would not advise this. If you don't, go for it! Who knows, maybe you'll even fall closer to the "eight shades lighter" spectrum than I did...