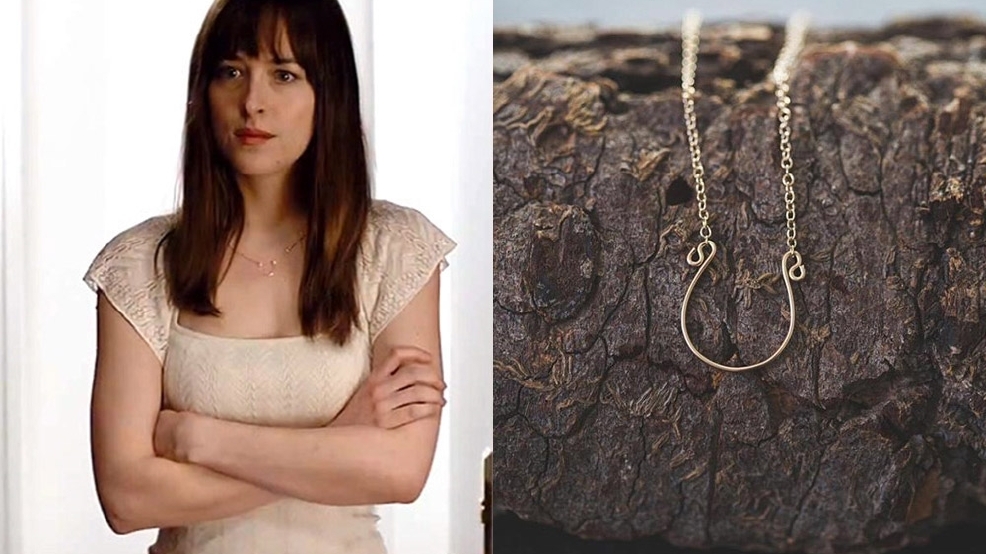 Imagine unknowingly being part of a famous movie. Now, imagine that movie was the bondage filled blockbuster, Fifty Shades of Grey.
That was the surreal experience local Seattle jewelry designer Lisa Richardt, had when watching one of this year's hottest films.
Starting her business Veronica & Harold, less than two years ago, Richardt never would have guessed the fame that would come from selling to a boutique in southern California.
One day, a costume designer came into the West Hollywood shop and purchased a couple of Richardt's pieces. He soon after returned for more, telling the storeowner that the actress he was dressing liked one of her horseshoe necklaces, and wanted more.
When the costume designer deigned to say what actress or what film the he was working on, Richardt thought she might never know.
One year later, Fifty Shades of Grey premiered worldwide.
Richardt's group of friends persuaded her to come out with wine and a fun 'girls night' to the theater.
"I was planning on keeping quiet about seeing the movie," she said. "I wasn't expecting I would tell everyone I know that I saw it!"
Sitting there, Richardt thought she recognized the necklace Dakota Johnson was wearing in a couple scenes.
"I thought, 'Wow! That looks like my necklace,' she said. "Then I said 'Oh my god! That is my necklace!' with a couple swear words in there."
Even now Richardt couldn't tell me what she thought of the movie, she was so focused on watching for her piece of jewelry.
"I need to watch it again to remember the plot!" she said.
It can be a double-edged sword being featured in one of the most controversial movies of the year. Richardt says that her parents are most supportive, but her mom was curious whether Dakota Johnson wore it during the raunchier scenes.
Thankfully it was only worn when Johnson was fully clothed...so rest easy Mom! In fact, it's the only necklace Johnson wears in the entire movie.
Since it debuted, Richardt's line has been receiving worldwide attention and orders from the U.S. all the way to Switzerland.
"[After the movie] I came back home and in two and a half days, I made 250 necklaces. I had to recruit friends to cut wire and help," Richardt said.
Usually she only produces 20 to 30 pieces a day at the most, so this increase was quite substantial.
"I haven't figured out how to keep up with production, especially because I make every single piece myself. The demand is increasing significantly," Richardt said.
Veronica & Harold is sold in retail locations, but the collections can be seen on her site and ordered through her contact page. Richardt described her jewelry as minimalist and easily transitional from conservative to funky.