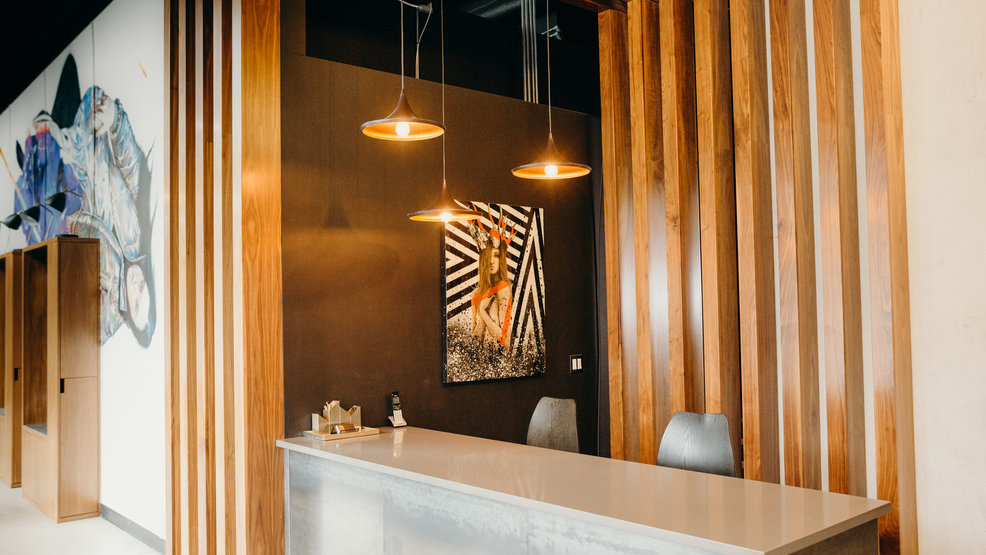 Every single time I see any of the following words/phrases, I roll my eyes just a little: gluten-free, dairy-free, hemp, farm to table, dairy-alternative, or vegan.

There are probably a lot more I could add to that list, but you get my point. These words have been slapped on to any and all businesses and products - especially in Seattle - to try and market to a city of hipsters. Oh, those hipsters.

But I'm in the wrong here, for many reasons - but mainly because the original meanings of these words have been pretty much blasted from my mind to make way for their societal counterparts. Gluten-free no longer means 'something that doesn't contain gluten, so that folks with legitimate allergies can eat without fear', to me it now means 'something that a millennial can order at brunch when she wants her pancakes but is still trying to lose weight.'

And don't get me started on the word 'vegan'.

So when I saw an email come across my desk regarding a salon in Seattle that was seemingly the only one in town that offered vegan eyelash extensions - you can believe I rolled said eyes HARD.

But, my interest was piqued. What did that even mean? Were the lash extensions made out of twigs and ferns? And I guess the scarier question - if vegan eyelashes exist and are made of natural products, what in the gosh darn heck are non-vegan eyelashes made of?

So I booked an appointment at Lancer & Lace, in Belltown - just a short walk from where I work at KOMO Plaza. Arriving at the salon, I was immediately taken in by the *huge* portrait of a tattooed JFK and Jackie Onassis. I had done by homework, so I knew that these two were the muse of co-founders Katie Rainwater and Julia Anderson. "Lancer" and "Lace" were the Secret Service handles for the two while JFK was in office.

And while I still had no idea what kind of hipster hole I was about to go down, I had to admit the space is absolutely gorgeous. I'm no interior designer, but we've posted enough homes here on the site to know when something looks good. And Lancer & Lace looks incredible (click through the gallery above for some of their interior and artwork shots - the two murals by local graffiti artist Weirdo).

I met co-owner Katie Rainwater just inside. She was working the desk - which was, to be honest, a shock.

"Julia and I like to work the desk the majority of the time," she explained. "It's our place, so what could be better than having the owners meeting the clients the moment they walk in?"

This kind of humble hustle emanates from Rainwater, who is the esthetician side of the business. Anderson the stylist. The two met at a previous job, and after months of working and planning - opened Lancer & Lace about a year and a half ago. At the heart of their salon, is the mission to be as vegan, and cruelty-free as possible.

So now, the big question. What does that actually mean? Turns out, it's pretty simple.

"Vegan lashes are made with the exact same material as the normal lashes, which is a poly-synthetic fiber - essentially plastic - so that they're hypo-allergenic," said Rainwater. "So they really look exactly the same, they feel the same - the big difference is the adhesive. The vegan adhesive is not tested on animals."

This is the game-changer. As many of us know, or regularly try to forget, a ton of makeup products are first tested on animals.

"A lot of beauty products are in general, unfortunately," said Rainwater. "Just to kind of see if there are going to be any reactions."

With eyelash extensions and adhesives specifically, rabbits are usually used. I know, I know - this is difficult to hear. I wasn't shocked, but it was really hard to picture this stuff painted on bunny eyes so that I could get fake lashes. I mean, COME ON.

"They [rabbits] are the closest in the eye region to humans, so they use it to see what kind of reactions happen," she said. "And I had a pet bunny when I was a kid. So I'm like - this is not happening."

As soon as she had tested a variety of vegan adhesives and found one she liked, Rainwater quickly and promptly made the decision to switch entirely over to the cruelty-free versions.

"It's important to us because we feel like the salon industry in general is full of waste," she explained. "It's something that you don't think about, also as a consumer. It's kind of our responsibility to help the consumer have a smaller footprint, and make you aware that there is a lot of waste - and then take care of that with you."

The good news (for Lancer & Lace, clients, and bunnies everywhere) is that there is no difference with the cruelty-free lash extensions, in comparison to the 'old' ones.

"There is literally no difference in the look, just a difference in the adhesive. And the adhesive lasts the same time as the other adhesive so people won't be like 'Oh my lashes are falling out a little more than before'," she said. "I made sure to test about five different vegan adhesives to make sure that the wear was the same. It's not even going to be a thing to the client, but they're just going to be able to say it's cruelty-free. It's a win-win."

Because - lets be honest, those of us getting eyelash extensions are doing it out of vanity. It's not something that we NEED, it's something that we want. And, like Rainwater says - that's ok - but it shouldn't hurt anything else.

"I want to make sure I'm being kind to animals and being responsible when getting something as unnecessary as lash extensions," she said. "But we enjoy it, and we want it - but it shouldn't have to hinder other things."

After spending several hours with Rainwater hearing the nitty gritty details of adhesives, lash extensions, animal testing, and everything that goes into this growing beauty phenom - I've drunk the koolaid. Completely. Partially because now I can't get the image of bunnies being painted on with adhesives out of my head, but also because Rainwater's vibe is so essentially non-pretentious. They are not throwing the word 'vegan' on these lashes just to get the hipsters in their doors. Rainwater and Anderson are doing it because they feel passionately about it, and believe in it.

"Lashes have come so far in the last 10 years that we really don't need to do testing anymore," she argues. "We know what the adhesives do, and here at our salon, we absolutely do not attach them to the skin. They are applied to the lash, and only the lash about a millimeter up from the lash line. So there is very, very little risk of reaction with the way that we do lashes."

That, and being cruelty-free aren't the only things that set Lancer & Lace's lashes (say that ten times fast) apart.

"We like to make the lash extentions look like you have perfect mascara on," said Rainwater. "I want people to be like 'What kind of mascara are you wearing?' rather than 'Where do you get your lashes done?'"

Those of you who regularly get lashes are probably pretty familiar with the different "gauges", or essentially - thickness levels that the extensions come in. They can be super duper lightweight, or very very thick. It's all about the look you're going for at the end of the day.

"Our style is different than a lot of other salons," said Rainwater. "I don't want it to look like you're going to a club, 9 in the morning in Starbucks - we want you to look like you did your makeup perfect, and you're waking up like that."

And that, dear beauty-addicts, is why she is so good as what she does. She picked a speciality, and a niche, and has dedicated her craft and those at Lancer and Lace who work with her to doing that specifically the very best she can.

"Breanne and I are both, straight-up artists," she laughs. Breanne is another esthetician at the salon. "We use up to four to five different lengths in one full set, so that you get the variance and it looks like your natural lashes. We don't do one solid size - we'll do shorter, or even a different curl on the inside, so they don't mix around when they start to grow out."

Another shocking difference is Rainwater's aftercare regime. And no, I'm not using the work 'shocking' sarcastically AT ALL. Again, those of you who get your lashes done regularly might want to sit down.

Rainwater encourages, no - demands her clients wash their eyelashes.

Yes! Most other experts else always says never - ever - ever get them wet, because it will make them fall out. But Rainwater makes her own special lash shampoo that she sends home with her clients, and claims that because of this, and the special way they attach the lashes, they can last for three weeks without a fill, instead of the usual two.

"Think about it," she said. "A lot of people think they're allergic to the adhesive because they get itchy or red eyes after lashes. But they're just not cleaning them, and lashes are essentially large cups on the tops of your eyes for dirt and other things to get caught in."

Whoa. Mind-blown. As of writing this post, I am six days into my lashes, have washed them with the special shampoo every day and they still look fantastic. I mean...

Yeah, you can say that I'm hooked.

Now, let's talk price. Lashes are usually expensive, and fills have to happen regularly. Rainwater completely admits that their services are more expensive because they only hire senior stylists and estheticians. The good news, though - is that the vegan lashes aren't any more than the regulars would be.

At Lancer & Lace, full sets range from $200-$275, with fills between $45-$100. If you're already in the lash extensions game, we here at Refined highly suggest looking into Lancer & Lace and going vegan. And/or - convince your esthetician to go vegan!