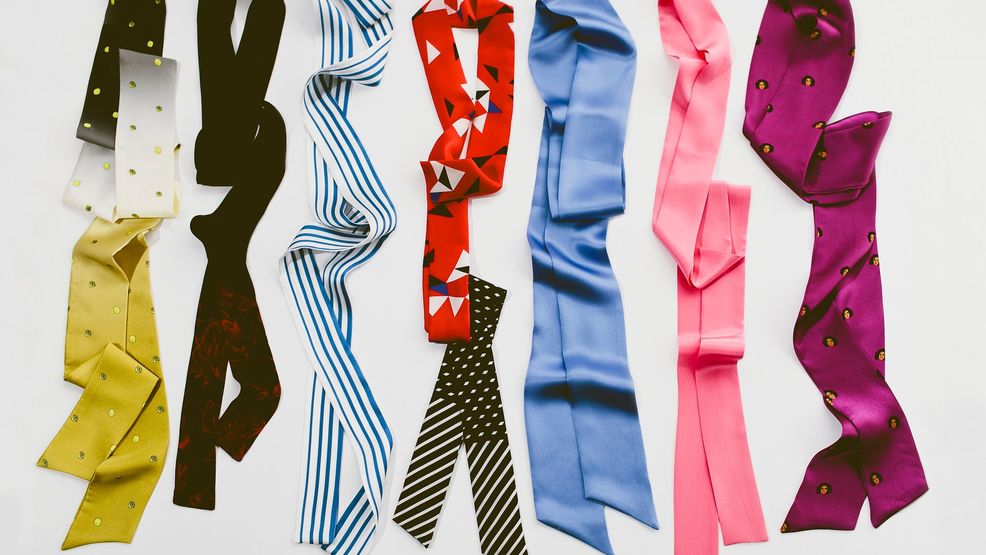 Neckties (aka pussybows) for women and girls that are designed after influential women from history and today. (Image @ Elizabeth Zuluaga for andieanderin)<p></p>
SEE MORE

You're welcome, in advance. I just did all the holiday shopping for all the women (and maybe even some of the men) in your life. Well - you still have to buy the gifts - but you know what I mean.

You may be wondering what the big deal is with neckties? Good answer, I'll tell you.

Each and every necktie in their line celebrates influential and accomplished women from history and today.

You get a necktie, you get a necktie - you ALL get neckties. Yep, that's right. Speaking of the talk show mogul, Oprah is actually one of seven ladies featured in the collection.

"We came to the decision of starting with a ‘lucky seven’ women, which include Beyonce Knowles-Carter, Frida Kahlo, Hillary Clinton, Malala Yousafzai, Michelle Obama, Mother Teresa, and Oprah Winfrey," said Santos. "We feel this is a diverse list of exceptionally powerful and inspiring women, but getting to this final list was a process."

Agreed. So, I had to ask - why neckties?

"We have always dreamed of doing something together," said Santos. "The idea came to me one night when I was putting my son to bed. I had just read about Papergirl Collection, who designs dresses for girls that come with a companion storybook. I just loved the idea! And it was a couple years prior that I had played around with designing non-traditional neckties for women when I was attending fashion school. But that night, I put it together. We could tell the story of influential women on a storyboard and design a necktie that is reflective of their spirit. I text Cara that night, started drafting a business plan and we met a day later to start breaking ground. It was amazing to see how quickly the idea resonated with Cara as well. We knew we had something special!"

"We are calling them neckties, but they are most commonly referred to as pussybows," agrees Ingham. "They were first introduced in the early 1900s, but it was the re-introduction of the the pussybow to the fashion world in the 70s and 80s, along with the women’s movement, that is of most significance to us."

They looked to the movies to name their business, and quickly decided on Andie for Molly Ringwald’s character in "Pretty in Pink" and Erin for "Erin Brokovich" played by Julia Roberts.

As women started to rise to more prominent work positions, the pussybow became a staple along with the woman’s business suit. It was kind of the female version of the man's tie, and was supposed to help them fit into the male dominated business environment.

"Now, similarly to the 70’s and 80’s, there is a resurgence of women empowerment," said Ingham. "With andieanderin, we want to support and contribute to this momentous social conversation. We are bringing the pussybow back and designing it after the trailblazing women from past and present. We want these neckties to be statement pieces. And it makes it all the better that pussybow blouses are back on trend!"

The most difficult part of the project was identifying which women they wanted to feature with their first neckties.

"On day one, we started assembling a list of influential women, which we still add to whenever we come across an inspiring story," said Santos. "But this list is crazy long - and for good reason!"

That's a good problem to have!

"There were a few women we felt strongly about including, but we also knew we would have to get input from others to really nail down the list," said Ingham. "We assembled a survey and started collecting feedback from women and men. The survey was open-ended and included a mix of categories such as athlete, humanitarian, entertainer, and so on."

The response was phenomenal.

"Some people would take 30+ minutes to complete the short survey, some were googling names because they only knew parts of a name or parts of a woman’s story, and others were done in just minutes," she laughed. "Some people even thanked us for asking them to do the exercise because it opened their eyes to a question they don’t often think about. It was a powerful experience that both cemented some of our nominated women as well as introduced new women that we weren’t originally considering for the collection."

"We have yet to solidify the women," Ingham. "Again, there are a few we are certain will be in the collection, but we would like to get external feedback and will likely ask our community of backers from Kickstarter to help in this decision. It is thanks to them that a second collection can be a reality. We are also excited about experimenting further with the design of the neckties for round two. The amazing Melinda Gates is on our short list of women that we must design for ASAP. You may even see her in round two! She, along with the Gates Foundation, does so much to better the lives of people worldwide and in Seattle."

Girl's neckties go for $40, and women's are $60. Each necktie comes a storyboard that illustrates the accomplishments of the woman-inspired necktie you purchased. Right now, the first collection of seven neckties is available through pre-order on their Kickstarter page. But after the close of the campaign in December, the website will be available for orders.

"We see designing and selling neckties through andieanderin as part of a bigger message of equality and empowerment," said Santos. "We plan to always donate a portion of the sale proceeds to a charity organization that is supporting these same efforts. We will rotate the organizations we support simply because there are so many amazing ones out there, but for our first collection, we have selected Step Up. Through mentorship and after-school programs, Step Up works with young women to prepare them for life after high school, empowering teens to become confident, college-bound and career-focused."

See all seven neckties in the gallery above.