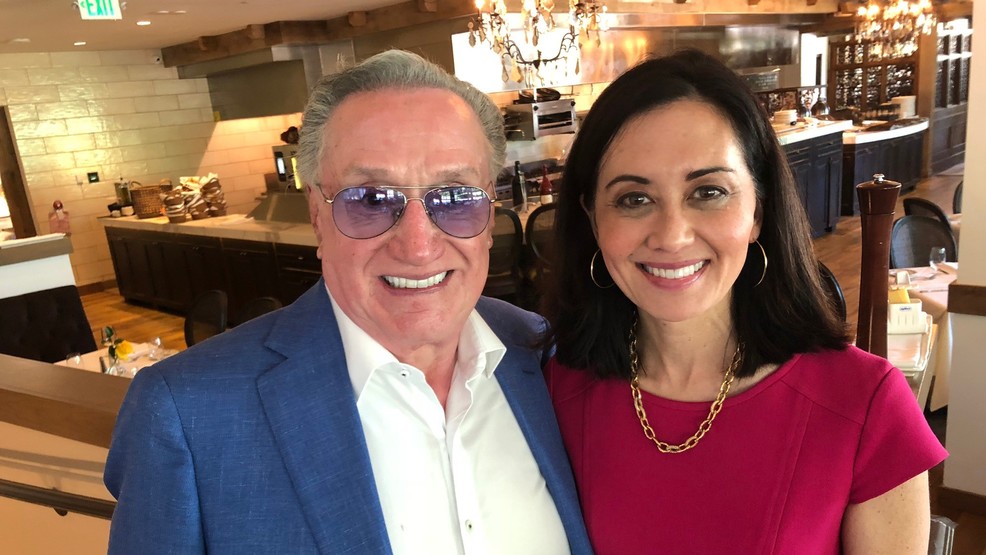 We met up with the local legend at his favorite restaurant, Carmine's in Bellevue. (Image: Seattle Refined)
SEE MORE

Gene Juarez: Meet the Man Behind the PNW Hair Empire

Touring this salon with Gene Juarez - it's clear he's a celebrity. He can't get too far without someone sharing a kiss, a hug and a happy memory.

It's been more than a decade since he "retired" from running his salon and spa empire, but when former employees see him - Juarez is greeted as a beloved friend.

Family has always been at the center of his life. We met up with the local legend at his favorite restaurant, Carmine's in Bellevue.

"I grew up in eastern Washington in a little town outside of Yakima, called Wapato," said Juarez. "[A] very agricultural community. A lot of great people. I'm really proud to have been raised there."

Juarez's parents were both Mexican immigrants.

"My dad was a really really hard worker," he said. "The hardest worker that I've ever known. And he gave that to us [as] a gift. To be proud of what we do and do everything we do the best."

Juarez's father was also illiterate - he can vividly remember him signing his name with an "X". Eventually, his older brothers and sister taught their father how to write his name.

"My mother was was a saint, she was just a lady. Just a real lady," he said. "And she had standards of cleanliness in excellence, behavior, manners and was the disciplinarian. It was all with love and understanding and to try to make us better."

He grew up the youngest of six. His folks worked as farm laborers.

"They could only see from their sense of reality. My Dad's fondest wish for me was that I would have an indoor job cause we worked in the field," said Juarez.

Even as a teen, he knew he had to leave his small town.

"There was no future for me in Wapato," he said. "So I wanted to escape. And I needed a vehicle, I needed something to do. And I knew the best thing I could do was have a profession - and the easiest profession for me to achieve was the hair business."

Huh? Not necessarily the first thing that comes to our minds...why hair??

"Well it's because I love creativity," Juarez laughed. "I took all the art classes primarily because they were easy grades. I learned the principles of design: line form, movement, texture and balance."

Then, at the age of 16 - a heartbreaking loss; his mother was diagnosed with cancer. In the midst of dealing with her death, Juarez planned a path for his life. He was awarded a scholarship for beauty school, and set his sights on the big city.

"I'm gonna go to Seattle and I'm gonna become Mr. Hair!" he exclaimed. "I just wanted to be the best I could be."

The year was 1963 when Juarez got his first job at a Seattle salon. He did color and cutting - and charged $3.50 a haircut. His skill and work ethic made him in-demand.

"In the service business if you're in the backroom, you're not learning anything. You're not helping the team," said Juarez. "The way I was raised I was always in front. Always trying to help other people and that paid off."

The style at the time was hair-raising, literally!

Juarez continued working at a series of salons, perfecting his craft and building a loyal clientele. Soon, the movers and shakers of Seattle were coming to him. Think Mary Gates, the Nordstroms, the Skinners. Soon, the "helmet hair" of the past was going out of style. Juarez went to London and studied at Vidal Sassoon to learn about the newest looks.

"I got a flat at Kensington High and went to school during the day, got to know the instructors quite well," he said. "I was there for a month and came home. And that was the salon I wanted to start."

Deciding to use his name for the salon was very intentional.

"I had traveled enough at that point to see other people who were successful use their names," he said. "I was going to invite people to join me and be part of my Juarez family."

The year was 1971 when he opened Gene Juarez in downtown Seattle, 801 Pine Street. The success was organic. Today, there are ten locations in the Puget Sound area. They offer services including hair, makeup, massage, nails and much more.

That flair for creativity Juarez had as a kid can still be seen all over the business he built - he designed the building and decor of the salon and spa in Lynnwood. And for almost five decades, clients have come to the buildings that bear this name to look their best.

From designer Diane Von Furstenberg to 90s model Fabio, Juarez crossed paths with all sorts of celebs. But it's his Gene Juarez family that mean the most to him.

These days, Juarez is pursuing his passion - with a famous friend.

"Edgar Martinez and I, and a couple other great guys are importing a mezcal from Mexico," he grins. It's called Zacatacano, and it's the bestselling mezcal in Mexico. "What makes it special is it's known for its smoky taste. It's all from the agave plant, just like tequila is. Ours is the least amount of smoke to it so it's much more mild."

And he's still heading up the Celebrity Waiters Luncheon, after co-founding the event in 1984. Their lunchtime auction raises money to help others. These days, the charity is The Millionaire Club.

"The purpose of it is to bring the community at lunch, to have fun, and to still make it a fundraiser," said Juarez. "We have fun and fundraising at the same time. They're part of a solution to a growing problem - which is homelessness."

Juarez has had so much success in his life and career - we had to ask: what the heck is his personal motto?