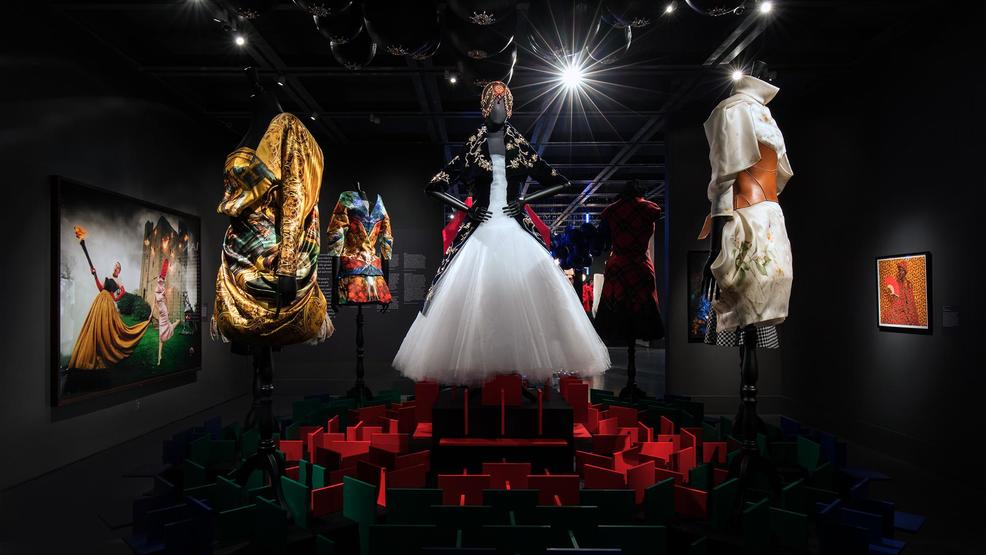 MoPOP's 'A Queen Within' explores different archetypes of the female identity

Creativity and couture reign at MoPop - in a dazzling new display!

"'A Queen Within: Adorned Archetypes' is an exhibition that explores six different archetypes of the female identity," explained Jacob McMurray, Senior Curator at the museum.

The fashion experience examines the concept of 'queen' through a variety of lenses: Thespian, Heroine, Explorer, Sage, Enchantress and Mother Earth.

"It features over a hundred pieces of experimental fashion from experimental gowns, headdresses, shoes, jewelry," said McMurray. "All of these pieces are from some of the most groundbreaking designers, and up-and-coming designers as well."

We had to take a look around this whimsical world. You're heard the expression - "wearing your heart on your sleeve"? There's a dress that takes it a step further.

"The red piece that we’re looking at here is a Comme des Garcon piece that Rei Kawakubo designed," he said. "It’s all red and it’s all about the heart, and sort of kind of this tension between sort of love and almost a more violent expressive set of emotions here."

Next up, a peek inside a portal to another place. We had to know - what was the deal with the headpiece that looks like a pair of lips?

"This is a Charllie le Mindu Head Dress," noted McMurray. "It’s really crazy and evocative and I loved that it’s paired with the shoe with all the teeth on it which is a Fantich & Young piece. And then we have the feather shoe from Alexander McQueen."

Next - a stunner that stops us in our tracks. It's looked a bit like beautiful bubble wrap.

"It’s a piece by Iris van Herpen and it’s really designed after cymatic," he said. "Which is the process of visualizing sound waves as you make higher and higher frequencies. It creates this really, almost organic really moire kind of patterns and she designed this piece after that."

From a dress inspired by sound to pieces that mess with your mind. There's a pairing of short and tall mannequins that make you feel like you're in a fun house!

"It’s really trying to play with that idea of conventional notions of beauty ," said McMurray. "This is in the explorer section so it’s all about breaking the status quo and presenting something that’s quite different."

Different and innovative is how you'd describe this "all in one" piece.

"This is a piece by Miyake," he explained. "The designer was really concerned with trying to create garments that had zero waste altogether, so no offcuts or anything - so it’s actually sort of woven as tube and a computer determines where the cuts and the sewing points are. It creates a single piece with zero waste altogether. You can see as it’s cascading down, the whole bolt of cloth that it came out of."

Also featured - the work of a dynamic designer who infused everything with emotion and energy: Alexander McQueen. Front and center - one particularly regal dress with an unusual name.

"And this is the girl that lived in the tree," said McMurray.

"In his yard he [McQueen] had a 600-year-old Elm tree. And he thought of what if there was a girl who actually lived within this tree and emerged so this whole piece is based off of that so very sort of naïve and innocent but with sort of a wisdom beyond her years."

From the fantastic and fanciful to the unique and unforgettable - there' so much to see at 'A Queen Within.'

"I really think there’s a little bit of queen in everybody," said McMurray with a grin.

Check out A Queen Within: Adorned Archetypes at the Museum of Pop Culture in Seattle through September 2, 2019.