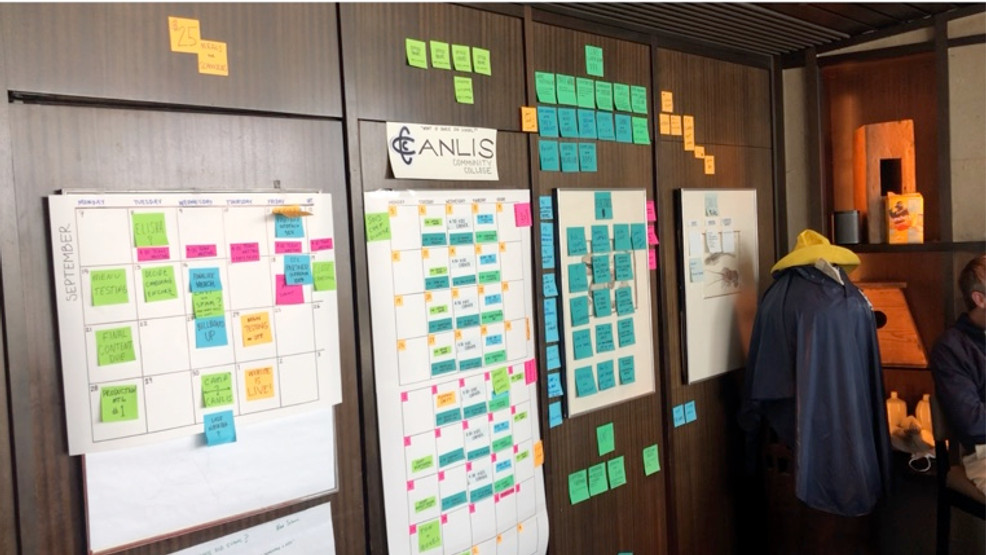 'What If Canlis Did School?': How a Wall of Sticky Notes Became Canlis Community College

'Pivot' is a term that gets thrown out a lot to describe Canlis' approach amidst the pandemic. Mark Canlis, well, he isn't the biggest fan of the word.

"It's a good word. It's such a good word. I don't know if I have basketball nightmares from high school or something," said Canlis with a laugh. "One of the things I don't like about the word pivot is it assumes a certain amount of change. If you haven't played basketball, the reality here is one foot stays planted while something else moves."

No, what Canlis has done, going from fine-dining, to drive-thru, to meal delivery service, to crab shack, launching nine, soon to be 10 concepts in less than 7 months, is more akin to boxing than basketball.

"It seems like we're in the 7th or 8th round of a hard fight," said Brian Canlis, who co-owns the iconic restaurant with his brother. "I think we're tired, I think we're a little beat up, but our hearts are still so in it."

The perception from the outside is Canlis is winning that fight. The reality, like it is for so many restaurants, is more complicated.

"When you're trying to keep 115 people employed, and you're used to a certain amount of sales and all that disappears overnight - it's tricky," explained Mark. "I'm not exaggerating or using hyperbole to say that [we're about to launch] our 10th business model and it's taken every one of those in the last 28 weeks to save the company. And number 11 is coming."

That 10th concept comes at a difficult time. With the rainy season approaching, outdoor dining won't work, and opening the dining room with reduced capacity doesn't work financially. So Mark, Brian and the team are trying their boldest, frankly their craziest, idea yet...Canlis Community College.

"We asked the question, 'What if Canlis did school? What would that look like? What if we took this fall to highlight the best and brightest spots of our town and bring a little joy, a little humor and a little bit of Canlis into your home via a live stream?'" explained Mark.

"It's about the community and it's about Seattle and it is way more lo-fi and 8-bit. This is not HDTV people," said Brian. "This is home movies done thoughtfully and smartly with a light hearted sense of perspective on the world."

There are no credits to be earned at Canlis CC. Instead, a $25 dollar tuition fee (all the proceeds go to FareStart) gets folks access to the entire curriculum. That curriculum, every single class, was born on Post-It notes (more than 200 of them), all stuck to the walls of a private dining room-turned office/meeting space.

"We just need to make [the classes] cool. How cool can you make Treasures of the Canlis Cellar?" Mark asked James Beard Award-winning Wine & Spirits Director Nelson Daquip during a meeting on a smoky late September day.

During the ideation phase of Canlis Community College these meeting were part planning session, part brainstorm.

"Cool Ranch Doritos and Raveneau is one of the great pairings. What if that's what was in it?" wondered Brian as he, Mark and Daquip discussed a potential class pairing high-end wines with junk food. (No word if that one made the final schedule)

"We started with creating classes around the stuff we're really good at teaching: food, wine, cocktails, and we're going to do those," explained Brian of how the team came up with the class schedule. "We're going to have boxes you pick up with all the wine and food and cocktails so you can follow along at home. But that wasn't enough. That wasn't cool. That was expected...this is a community college. It needs to be about the city. And we started dreaming about all the crazy bonkers classes a community college would have and it just got fun."

Yes, this is a complete college experience including field trips, office hours, a kids program, campus store, microwavable TV dinners, and even PE.

"Every Wednesday we're going to have Aerobics After 8. It's going to start at like 8:03 am and we're going to do a 1980's aerobics class with a workout instructor and people behind doing step aerobics with high ponies," said Brian with a laugh. "So really it's a whole body education from the things you eat and drink to exercise to education. Gosh, I think we're even teaching how to cut hair and do magic tricks, so it's a lot."

Since every community college needs finals week, Canlis is bringing back an event that took the city by storm a decade ago, the now legendary menu hunt.

"In 2010 our restaurant turned 60. Social media was new and exciting. We decided to hide copies of our 1950's menu around the city. Every day we would send out a message with some type of Seattle historic clue and it would guide people to find a copy of this old menu. If you found it you got to come to Canlis and dine at those prices: $1.50 for a steak, $0.50 for a salt. Super fun. People loved it," said Brian. "And finals week is going to be the re-birth of the menu hunt. We're going to do it again for one whole week. It's the last week of community college. Finals week. Get ready."

Ten years ago, the grand prize for the menu hunt was dinner for two, once a year for life at Canlis. This time around, it'll be a $5,000 gift certificate to the restaurant.

For now though, finals week is a ways off. The focus is on the first day of school, and the emotions that go with it: excitement, anticipation and yes, a bit of fear.

"My favorite sticky on the wall is that one and it's easily the most important to me," said Mark gesturing to a Post-It above the fireplace that says, simply, 'die trying'. "It doesn't matter if you're good at it, you go after something you believe in and if you can't do it you die trying."

"I think that's what this restaurant is about, which is I don't know if this is going to work. I don't even know if it's a good idea, but we believe in it...and so I think we just find a lot of hope in fighting on and pushing through."