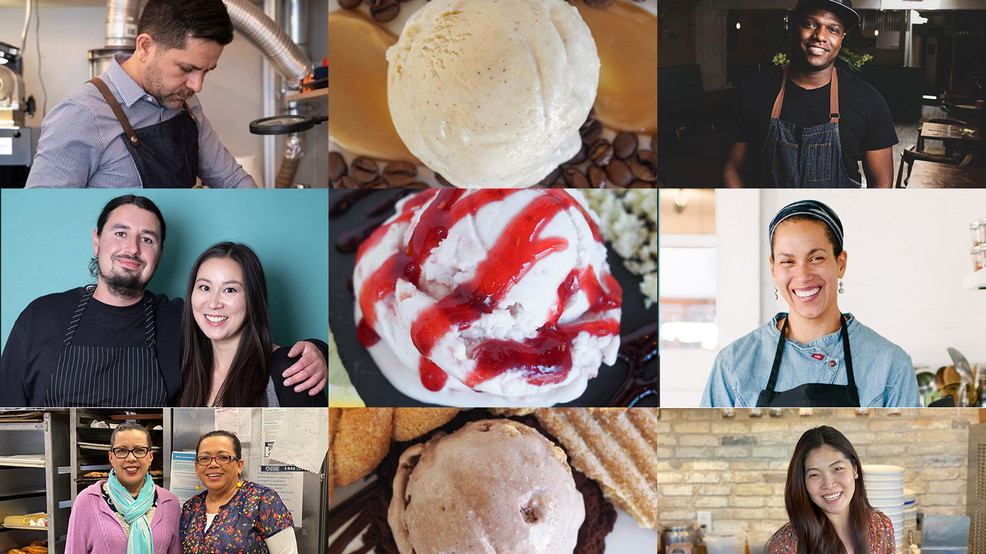 U-District’s Sweet Alchemy Ice Creamery and Seattle-based small business directory Intentionalist have teamed up for a line of limited-edition flavors - and these pints are more than just a frozen dessert. Each of the three new flavors utilizes local small business ingredients and sales benefit nonprofits fighting racial injustice.

From September 1st through September 6th, customers can place orders for all three limited-edition flavors though the Sweet Alchemy website. On September 11th and 12th, the exclusive pints will be ready for pick-up or delivered by Sweet Alchemy.

The collaboration came to fruition in late July as a way for Intentionalist founder Laura Clise and Sweet Alchemy owner Lois Ko to amplify small businesses and racial justice through their mutual love: ice cream.

“When Laura first proposed a POC ice cream collaboration, my immediate response was that this needs to happen!” says Ko. “We are proud to elevate the visibility of POC-owned businesses and reach people through ice cream with a racial justice message that matters.”

To Ko, ice cream is a vehicle for expressing her values when it comes to civil rights, environmental stewardship, and economic justice. Together, Ko and Clise created three new flavors, including one vegan option, each incorporating intentionally sourced, local ingredients from Seattle POC-owned businesses.

“Each pint is packed with connection, community, and a statement towards a commitment to racial justice,” said Clise.

Pints will sell for $15, and support and showcase multiple small businesses in each bite. A portion of each purchase will also go to local nonprofits, like Urban League, Chief Seattle Club and NW Immigrant Rights Project. As a result of recent events in Wisconsin, proceeds will also benefit BLOC, a Wisconsin-based non-profit.

The first flavor of the trio is Brew The Right Thing. The pint features single origin Fulcrum Coffee ice cream, a Latinx & LGBTQ-owned cafe in Belltown, with a coconut caramel swirl sourced from Jerk Shack, a Black-owned Caribbean eatery in Belltown.

Next is History In The Baking - which combines chocolate ice cream with chocolate ganache and cookies from Salvadorean Bakery, a family, woman & Latinx-owed bakery and restaurant in White Center.

The final flavor is Vegan Do This Together, which mixes vegan coconut ice-cream with lemon curd, jam from Off the Rez, a family, woman & Native-owned cafe in Seattle; and pie crust from Pot Pie Factory, a woman & Black-owned catering business.

Every flavor will be created and packed at Ko’s small batch ice-cream shop, Sweet Alchemy. Opened in 2016 at Seattle’s U-District, the shop is the only WSDA certified creamery in Seattle. The ice cream itself is made with all organic and locally sourced ingredients. Ko was a Korean exchange student at of the University of Washington, and while there she scooped ice cream at the U-District Haagan Daz. Upon graduating with an art degree, she stepped out to try out a few different careers, but eventually returned back to Haagan Daz, this time as the owner. She closed the franchise in 2015 and later enrolled in Penn State’s Food Science course, starting her journey into opening a more sustainable ice cream shop.

It’s small business entrepreneurs like Ko that inspired Clise to start Intentionalist. Intentionalist is—quite literally—an intentional list of local businesses. As a Seattle-based company, many of the businesses featured are in the PNW, but the database spans as far as New York and California. Laura Clise founded Intentionalist to encourage people to be intentional about where they put their money. Consumers should “spend like it matters,” because it does.

While each of the three flavors is tasty in its own right, Clise has one wish: “I hope that people will take a moment not only to support all of the diverse businesses represented in this collaboration and our commitment to racial justice, but also to learn a little bit about each of the business owners, because I think that will make every delicious bite even sweeter.”

The Local Businesses Featured In The Three Flavors:

Fulcrum Coffee
Latino & LGBTQ-Owned
Fulcrom Coffee is owned by fifth generation Costa Rican coffee farmer Blas Alfaro. Alfaro builds relationships with his coffee producers to not only produce the best cup of coffee, but to further Fulcrom’s sustainability efforts. Beans and grounds are sold through the website, and many Seattle shops, including The Station on Beacon Hill and Hood Famous Café and Bar in the International District, use Fulcrom coffee beans.

Jerk Shack
Black-Owned
Trey Lamont is the owner and head chef at Jerk Shack, a Caribbean restaurant on 1st Ave. With the help of a gofundme, Lamont has plans to expand his business to better serve the Seattle black community by opening a fast-casual location of Jerk Shack in a predominantly black neighborhood. With the future location, Jerk Shack can provide jobs, health insurance, child care assistance, among other benefits to the black community.
Read Trey & Jerk Shack's story: "Jerk Shack is a delicious slice of the Caribbean, right in downtown Seattle"

Off The Rez
Asian, Native & Woman-Owned
Off the Rez is Seattle’s first Native food truck. Owners Mark McConnell and Cecillia Rikard cook up Blackfeet Rez cuisine that was passed down to them from McConnell’s mother. Native restaurants are few and far between in the Pacific Northwest, leading McConnell and Rikard to start their own food truck, where frybread and Indian tacos are served daily. In addition to their food truck, they have a café location at the Burke museum on UW’s Seattle campus.
Read Mark, Cecilia & Off the Rez's story: "Off the Rez, Seattle's first Native food truck, opens café in revamped Burke Museum"

Pot Pie Factory
Black & Woman-Owned
Logan Niles crafts up deep-dish comfort food at Seattle’s Pot Pie Factory. Prior to Pot Pie Factory, Niles trained at Culinary Institute of America and ran her own private catering company, Blue Nile Catering, in NYC. At the factory, she has a pie for anyone, including those who are gluten-free, vegetarian, vegan, or paleo.
Read Logan & Pot Pie Factory's story: "Pot Pie Factory crafts comfort food with No Bases, No Bouillon, No BS"

Salvadorean Bakery
Latino & Woman-Owned
Founded in 1996, Salvadorean Bakery is run by sisters Aminta and Ana. The sisters are originally from El Salvador and started the restaurant and bakery to share a piece of their culture with Seattlites. The menu is full of traditional savory Salvadorean dishes, as well as cakes, breads, and pastries for dessert.