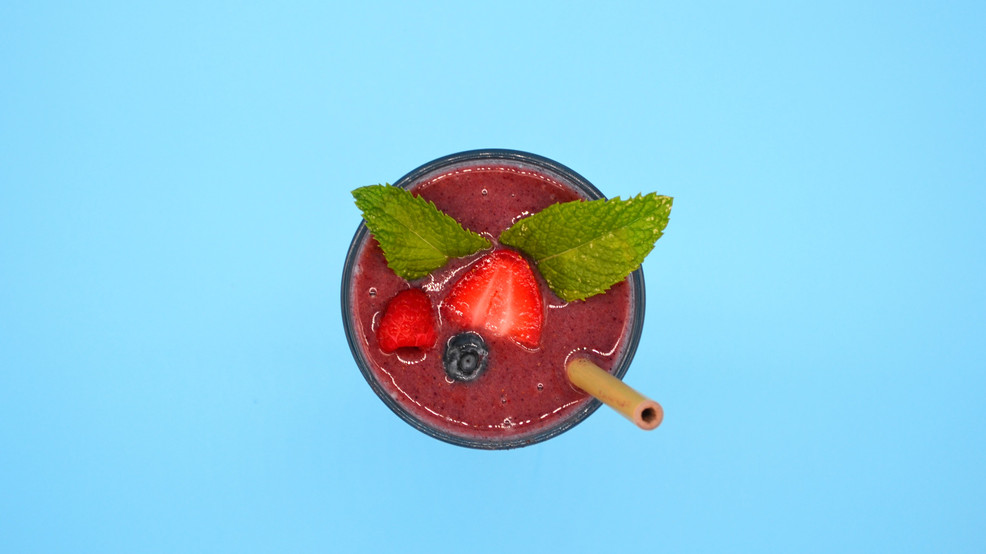 Austin Hirsh has made a smoothie every day for years. He thought, "How can I make this process easier?"

That, combined with studying the intersection of entrepreneurship and engineering and learning more about climate change, led him to start his own sustainable startup. The 2050 Company's debut product, The 2050 Smoothie, is an instant powder made from imperfect and surplus produce — just add ice and water, and you've got a nutritious smoothie in about a minute.

The inspiration came to Hirsh, a Gig Harbor native, in April 2019, when he discovered Project Drawdown, a nonprofit organization aimed at reducing greenhouse gas levels and emissions. Right now, reducing food waste is the #1 best way to prevent global warming of two degrees Celsius by 2050.

"When you think of climate change, you think of electric cars and solar power and all of this, but one of the most simple problems to solve first would be to just not throw away half of the fruits and veggies we grow in the U.S.," the 23-year-old said.

"I was making a really convenient smoothie by putting all of these ingredients in freeze-dried powders that could help limit food waste - because you could take this produce that is surplus or imperfect, dry it to extend the shelf life from days to years, grind it up into a powder so there's no such thing as ugly fruit and it rehydrates into the same end product."

This project took off when Hirsh won first place at the Fowler Global Social Innovation Challenge (University Level). He then went on to compete and place top 10 at the Global Level and received the Audience Choice award. Launching a Kickstarter during a global pandemic was not part of his plan, but Hirsh decided to move forward anyway rather than pushing it back.

"It ended up working well," he said. "This product is a nonperishable, healthy food that can be delivered straight to your door in a time when rice and beans were selling out, e-commerce was going crazy and people wanted to be healthy."

He spent basically all summer working on the Kickstarter and said it was "a great project" to have during this time — one that exceeded expectations.

"Because of COVID, I had other recent grads reaching out and just being like, 'I love this mission, can I help out? I have more free time now,'" Hirsh said. "I think that has been really helping a lot to make that Kickstarter successful."

The first flavor, Rainier Berry, is being sent to the "early-bird backers" of the Kickstarter. The campaign is still going on Indiegogo, meaning people can continue to back 2050 and get an order as a reward. Hirsh said his main priority is getting the first orders to the Kickstarter backers as soon as possible. He hopes to launch the other two flavors, Seattle Summer and Evergreen, in November or December — currently in development and in the process of getting started.

He hopes to grow his company from smoothies, and possibly venture into other parts of the food industry that can be more nutritious and sustainable.

"I look at companies like Impossible Foods that makes the Impossible Burger," he said, "They're one of my favorite companies because they are so focused on the impact, and they're not making a product that asks people to give something up."

The success of the Kickstarter has encouraged Hirsh to pursue The 2050 Company full-time.

"It's definitely worth pretty much giving it all I have right now. Now is definitely the time. I'm also really driven [...] by the mission of the company, and I mean even the name of the company is 2050," he said, noting how the name directly ties his company's mission to the projections of what our world could look like by 2050.

"The goal is to make that vision a little bit brighter."