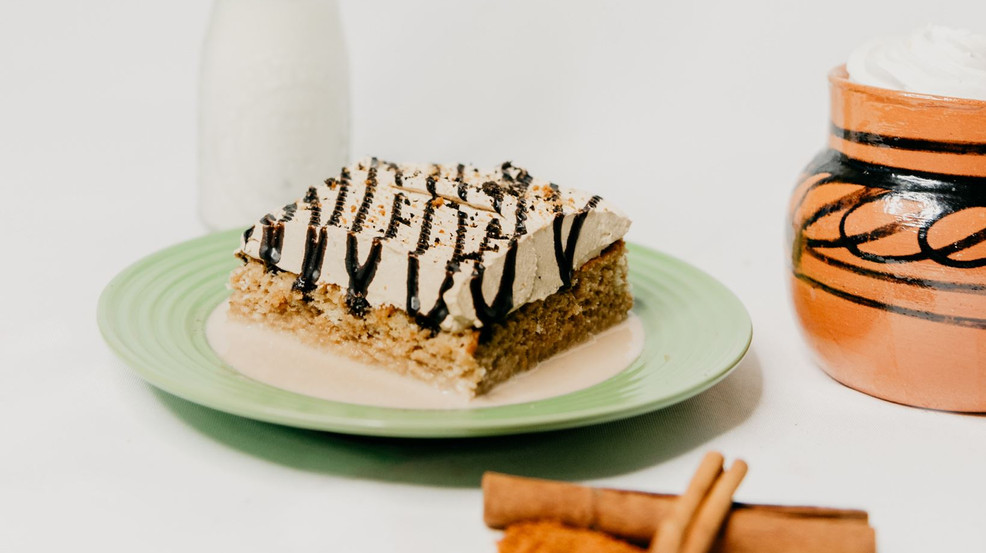 When I reach Kevin Moulder of Tres Lechería, he is pulling some of his tasty cakes out of the oven and has to put me on hold. Business has been steady as they've navigated the turbulent times of the coronavirus pandemic.

"We're fortunate that the business has not had to close," Moulder said. "I'm just happy to be able to keep working."

The day-to-day has changed a bit for the restaurant. They are now open from 12-8 p.m., which is a later start to the day and a "definite plus" as the busy baker now gets to sleep in a bit. Other than that, the upheaval of a once in a lifetime pandemic was something that Moulder was able to adapt to.

"We sort of already had a rebrand planned," he said. "Last August, we knew that we were fully converting over to Tres Lechería from the Cube Baking Company. We had lined it up to occur in March of 2020. Of course, March of 2020 is when the pandemic hit, and everyone had to change their business. It gave us that push to go ahead and make that transition 100% when I was kind of dragging it along."

Moulder formerly ran the Wallingford bakeshop until he changed the name and direction of his business. He now runs Tres Lechería, which offers tres leches cakes in a variety of flavors. The business shifted quickly to appointment-only pickups at the start of the pandemic and has now made the move to allow for people to swing by the front "window" without ordering online.

"We have nine to ten flavors of our tres leches every day," Moulder said. "Right now, it's the season for strawberry."

However, as the weather changes, Moulder predicts the horchata flavor will take that number one spot. You'd be right to trust his instincts. He knows his stuff as the winner of both the Food Network's "Winner Cake All" and Netflix's "Sugar Rush Christmas."

As for what his favorite is?

"Probably the horchata," Moulder says. "I'm a really big cinnamon fan, and since we add actual horchata to the base of three milks, it sort of cuts the sweetness down a little bit. And that's just my vibe."

Moulder grew up near San Antonio, where his love of baking started early. That love would lead him to develop a lifelong desire to bake professionally. He even graduated from Le Cordon Bleu in Austin at just 19 years old.

He is now living his dream of running his own business and making cakes, so many cakes, all day long. It still isn't all sunshine and roses as the business hasn't come out entirely unscathed.

"I did lose about $20,000 dollars in wedding cake orders that I had booked throughout the end of this year and the beginning of next," Moulder said. "I lost all of those, but I was able to not have to give up weddings entirely."

The weddings have been much smaller but still something he has been doing for those more humble gatherings of people celebrating matrimony.

Something Moulder also does, though it has been a while, is make cakes inspired by the acclaimed show RuPaul's Drag Race. Complete with its own Instagram, fittingly called RuPaul's Drag Cake, it was a passion project for Moulder.

"I did stop doing drag cakes, I think back in season 11, and that's just because my day to day got a little hectic," Moulder said. "It was just my way of getting to continue to be creative."

One thing is certain; Moulder is still full to brim with creative energy and looks to continue doing what he loves by sharing his work with others.

"From day one, when I moved to Seattle, I just knew that I had a goal of being able to share my family's recipes and my heritage with a group of people that may not be familiar with it. I quickly learned that representation in the heart of the city is not like it is back in Texas," Moulder said. "It's been really fulfilling being able to not just have one business but multiple businesses over the last five years that have allowed me to share these recipes, share these ingredients which aren't very mainstream, and continue to be able to provide representation for the Latinx community. For me, that's the absolute best thing ever."

Tres Lechería is located at 2315 N 45th St. and is taking orders now. Looking to support other diverse local businesses like it? Seattle Refined is proud to collaborate with Intentionalist, an online guide that makes it easier for you to find and connect with diverse local businesses owned by women, people of color, veterans, members of the LGBTQ community, and people with disabilities.