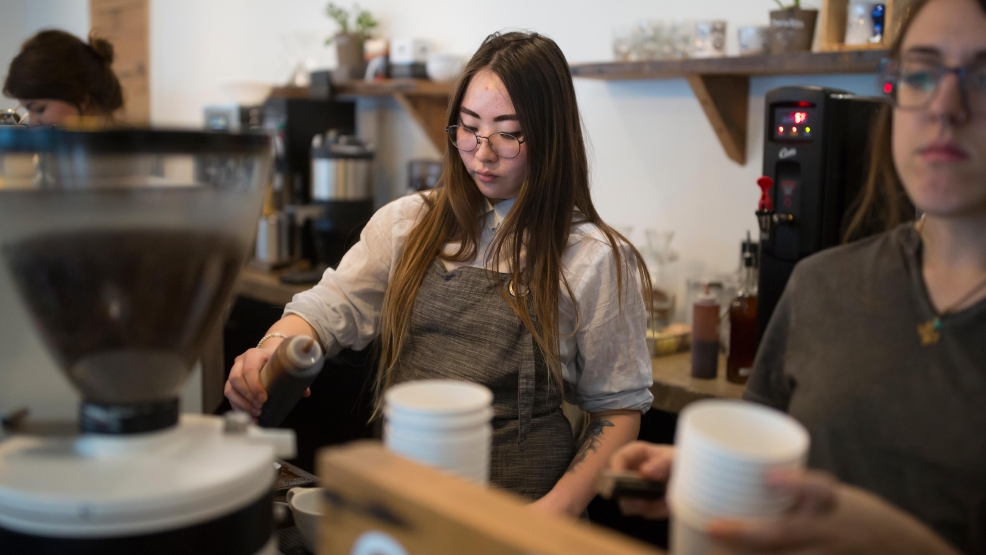 22-year-old Ynga Chernogradskaia makes a cup of coffee for a customer at Street Bean Coffee Roasters, a local coffee shop and non-profit that's dedicated to providing work opportunities for street-involved youth. Chernogradskaia became homeless after coming to the U.S. in September 2016, but found work through the program and is now living on her own. (Sy Bean / Seattle Refined)
SEE MORE

A Seattle coffee shop may just change homelessness in our city

Coffee is communion. It brings people together. Especially in our city, where coffee replaces the blood that runs through us! Java beans are life.

If you haven’t heard of Street Bean Coffee Roasters, this company just may change where you buy your coffee in our city. Street Bean is the brainchild of Linda Ruthruff, who works with New Horizons, an organization working to get homeless youth off the streets.

“Linda realized that youth would come and go [from New Horizons] and there wasn’t an employment opportunity for them. They would have no references, had very little money, and didn’t even have an address," said Jesse Smith, the Marketing Director/Wholesale Manager at Street Bean. "It’s very difficult to get a job without a fixed address.”

So in 2009, the non-profit coffee shop called Street Bean was born. The goal? Providing long-term employment through paid apprenticeships in their coffee shops and roasting operations for street-involved youth age 24 and under.

For some individuals, the shop is viewed as, ideally, the last stop before before full blown homelessness.

“The apprentice program is considered a ‘High Barrier’ program so we want to make sure that our apprentices view this as the last stop before the street. We do not accept everyone and sometimes have to turn away up to 60 percent of applicants,” said Smith.

Smith also mentioned that even though it's a competitive program, it isn’t impossible by any means. If a youth is successful in their interview process, the new hire begins their java apprenticeship.

“The apprenticeship starts very bare bones, like, let’s teach you how to take out the trash, let’s teach you how to clean the bathroom, how to wash dishes correctly and that in itself is a feat of its own. That can take like a month. Then, we teach them how to steam milk, interact with customers and do pour overs. It’s a slower process than we would love, but to do it right – we have to do it right,” said Smith.

Behind the walls of beans and espresso machines, there are living spaces and different resources for apprentices to further their journey off the streets as well as provide a solid living address.

“Behind the wall here is a drop-in center, where the youth can come get breakfast in the morning as well as cots to sleep at night. Upstairs, there is case management, so they will work on their GED, housing opportunities, and/or drug court [if need be]. There is also a mid-term living space called, ‘The Nest’ where the youth can come, if they are a part of the program, and have a spot to stay for like six months.”

After the six months is up, the company will evaluate based on individual needs if they need to extend the youth’s program duration, or the apprentice can apply for a full time staff position, either in roasting or as a barista.

It would be unrealistic to say this program works 100 percent of the time, as different kids have different needs and goals, but for the majority – this program has completely changed lives.

Cue Ynga Chernogradskaia, 22, who has been a part of the apprenticeship program for three months. Chernogradskaia emigrated from Russia in September 2016, and found herself homeless within months of living in Seattle.

“I became homeless in September 2016 and I was looking for resources to help. It is not enjoyable being homeless," said Chernogradskaia. "I found daily shelters and was finally connected with New Horizons. My case manager asked if I wanted to attend [the] Street Bean apprenticeship program] and I said sure, because what else could I do?”

Chernogradskaia began her apprenticeship program and was living in “The Nest” provided by Street Bean, until she had enough money to help find her own living arrangements.

“This program is so helpful. Because I was a homeless youth, I couldn’t find work or a job because no one wants to have a worker who is homeless and without working experience so I was really struggling. I am still struggling," said Chernogradskaia. "But, New Horizons and my coworkers have just accepted me and they are all so nice. As long as I have this job for now, they have really helped me. I don’t know what I would do without this job. I wouldn’t be able to pay for housing and food.”

Although working at Street Bean and being an apprentice has improved her life dramatically, Chernogradskaia says because of the label and stigma of homelessness, she still faces hardship and prejudice.

“It is hurtful because I know that a lot of people are wealthy and healthy and kind of live in a bubble. Even though they are good people, they can still be judgmental. I was homeless and I’m not afraid to say that. I never used drugs or hung out with gangsters and it was hard to get out. And now [that I am out] I am fighting against prejudice," she said. "I have hopes and dreams as all people have and the label ‘homeless’ kind of dehumanizes and makes people feel worthless. Yes, I was homeless but I can still feel hurt and I still feel pain.”

Yet despite all this, Chernogradskaia is doing so well in the program and already has made drastic improvements towards saying goodbye to homelessness forever. Not to mention, she has completely fallen in love with coffee. Like, head over heels.

“I LOVE COFFEE. Oh my gosh, I love coffee. I can say that in Russia they don’t have good coffee at all. Before I started working here, I thought that I hated coffee and it was because I had never tried good coffee. When I tried it here, I was like ‘THIS IS SO GOOD.’ That’s why I love this place too and I love working with coffee. I drink endless coffee. Unbelievable amounts of coffee,” she said.

Well, she's definitely in the right city! We love coffee too. That’s why we LOVE this program! It’s such a fantastic way to help homeless youth get on their feet and give them the experience they need to succeed and further their lives and careers.

“They have saved my life. I think people need to know that good programs like this exist because I was so depressed," said Chernogradskaia. "[Street Bean] isn’t a doctor, but they are saving lives. I love this place not just because of the money, but because they treat me like an actual person. I’ve become friends with a lot of staff here. I think it’s important for young adults who experience homelessness to have this refuge and this help.”

This girl was the bomb and totally inspirational. Oh, and the coffee is ridiculous (in a good way) too.

“For me, [this program] was a miracle. I was so screwed and Street Bean helped me out,” said Chernogradskaia.

Something that Street Bean Coffee prides themselves is that when a customer buys one bag of their coffee, it goes to an hour of paid training for a youth on the streets. Same thing if you purchase their new cold brew. If you buy one box of their new cold brew product, it supplies 40 minutes of paid training. Anytime you buy their coffee, it is directly going into the pockets of these young adults.

Pretty sweet huh? Street Bean Coffee operates out of two locations, one in Belltown and the other in the U-District. To find more information, visit Street Bean online and try some of their coffee! It’s for a fantastic cause, and will fuel your body and soul. Cheers!