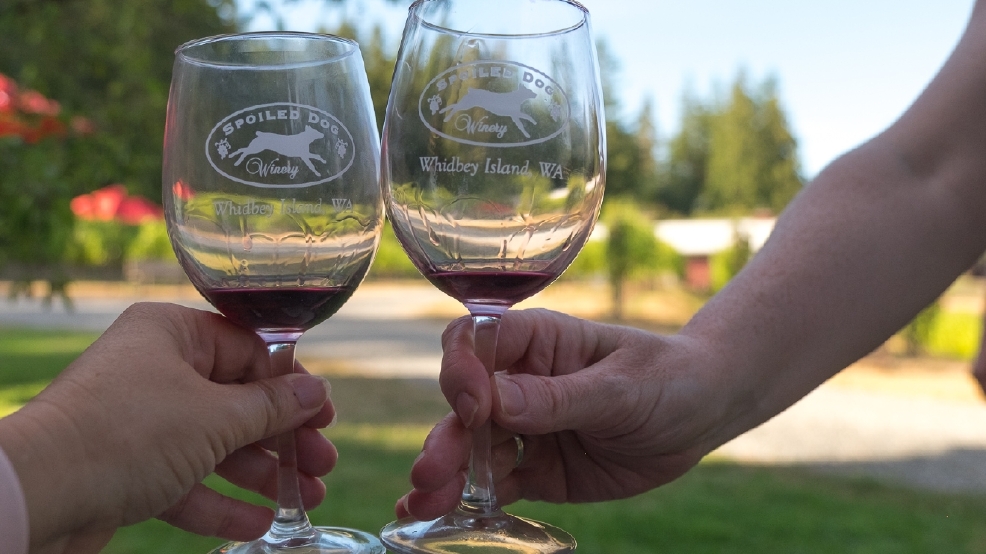 The Wonderful Wines of Whidbey Island

I was chatting to one of the customers in the Comforts of Whidbey tasting room near Langley on Whidbey Island when she summed up my thoughts very neatly:

"For me, wine tasting is all about three things – great wines, great locations, and great people."

You can get all three in eastern Washington of course, but to get there you’re facing a lengthy drive from Seattle. You’ll find both great wines and great winemakers in Woodinville, but there you’re usually a long way from the beautiful vineyard locations and the viticulturists who grow the grapes.

But if you time the ferry right, you can be tasting some fascinating wines, chatting to the passionate winemakers and viticulturists who are blazing a winemaking trail in the area - AND enjoying some of the prettiest vineyards in our state, all within an hour’s drive of Seattle.

Welcome to the wonderful wineries of Whidbey Island.

Whidbey’s fertile glacial till has long supported farming of all types and within the last decade or so has an increasing number of vineyards have been planted on the island, in the area close to Langley. Although the area sits in a rain shadow that ensures a longer, drier growing season than other Puget Sound locations, the cooler maritime climate doesn’t support the red grapes for which Eastern Washington is becoming increasingly renowned. Instead, the vineyards on Whidbey focus primarily on growing some unusual white varietals, such as Madeleine Angevine and Siegerrebe, though the Spoiled Dog Winery is also having some success with its Pinot Noir. These white varietals, which are rarely found in the U.S., are traditionally grown in cooler regions of Europe such as the Loire Valley and Alsace, and produce crisp, dry whites, with a floral bouquet drying to a citrussy finish, that are outstanding paired with the island's magnificent seafood. The Whidbey wineries, like their Woodinville counterparts, also bring in grapes from eastern Washington to make their wines, so it’s possible to taste award-winning wines from both ends of the wine color spectrum.

We visited three beautiful wineries with vineyards, all close to Langley, whose owners are growing grapes and making wine on the island. All three wineries also use their beautiful settings to host regular concerts, dinners, and events, so make sure you get on their mailing lists.

Spoiled Dog Winery
As we trundled along a lane through the thick forest I thought at first that we had made a wrong turn. It seemed inconceivable that any sort of farm would be here, let alone a vineyard. But the trees opened up to reveal a wide valley full of vines and the delightful 25-acre Spoiled Dog Winery. Owners Jack and Karen Krug make a selection of high-quality wines here using their own grapes and those from select Washington and Oregon vineyards that utilize biodynamic or certified organic growing practices, though the winery is best known for its pinot noir. The Krugs moved to Whidbey from Colorado and Karen’s passion for pinot noir led her to experiment with several different clones to find those that would thrive in Whidbey’s microclimate. They also produce an excellent apple-pear wine Pomo di Moro from their own orchard-grown fruit. Buy you’ll have to go to Whidbey to taste their wines, the limited number of cases they produce each year are only available at the winery and selected Whidbey restaurants. Check out their website for details of events and wine dinners among the vines.

Comforts of Whidbey
When I visited the Comforts of Whidbey winery they had just opened their stunning multi-level winemaking facility, tasting room, event space and BnB, with gorgeous views over Puget Sound. Rita and Carl Comfort grow Siegerrebe, Madeleine Angevine, and Madeleine Sylvaner and are experimenting with Pinot Noir. Their reds are made with grapes grown in Eastern Washington. The vines were originally planted by the previous owner, a Croatian, who realized that these unusual old European varietals would grow well in Whidbey’s maritime climate. Their 22-acre farm is also home to cows, llamas, and alpacas. Again, their wines are only available to purchase at the winery and in select Whidbey Island stores, though they are hoping to move into the Seattle market soon. They also have huge plans for their new event space, so check out their website to see details or to plan your own event.

Whidbey Island Winery
Whidbey Island Winery is the 'grande dame' of vineyards on Whidbey. Owner and winemaker Greg Osenbach and his wife Elizabeth planted their first vines in 1986 and opened the doors to their winery in June 1992 with 400 cases of wine. They now produce about 3,500 cases a year, distribute throughout Washington state and their wines have won numerous awards. As with the other wineries on the island, they grow mainly white varietals, among them Siegerrebe, Madeleine Angevine and Madeleine Sylvaner, and import their other grapes from Eastern Washington. The charming winery has a tasting room with a patio and picnic tables set beside a century-old apple orchard.

As well as these wineries with vineyards, there are several other wineries and tasting rooms on the island if you wish to plan a whole tour. More details are here.