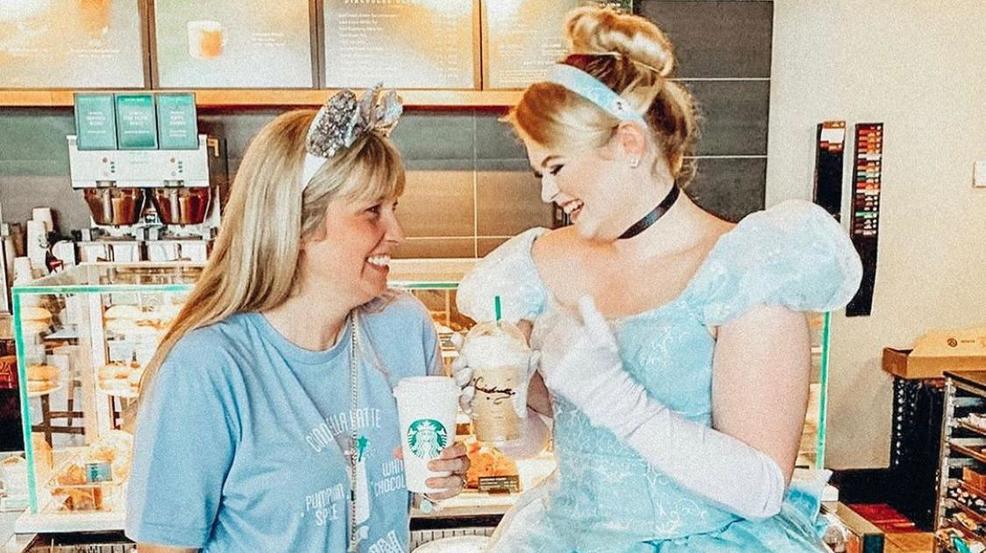 I held my breath as I pulled up to the Starbucks drive-thru. My barista cheerily greeted me as I confidently ordered:

I wasn’t 100% she would know what I was talking about. After all, the Cinderella Latte isn’t on the Starbucks menu: it’s just one of those “secret” menu items growing in popularity this pumpkin season. But I was here to test it out - to see if my barista knew of this delicious magic.

“Oh, don’t you just LOVE that drink? The name always makes me smile,” she replied. “Me too!” I exclaimed, thrilled that my local Starbucks was in on the Disney-inspired goodness. I mean, can you think of anything better than pumpkin spice and white mocha TOGETHER?!? Honestly, I wasn’t too surprised that my store knew about the Cinderella Latte. After all, I wasn’t too far from the original Starbucks the Cinderella Latte came from.

The Cinderella Latte started in the Pacific Northwest, at a Starbucks in Burlington, when former barista, Erica Howard-Cox thought to mix up a Pumpkin Spice Latte with half pumpkin spice and half white mocha flavoring. She says she dubbed it the Cinderella Latte because, “the combination made me think of the scene where Cinderella’s fairy godmother turns an ordinary orange pumpkin into a beautiful white pumpkin carriage”.

But why did Cinderella first come to mind? Why not just the “White Pumpkin Latte”? Well, Cox has forever been a Disney girl.

“My love for Disney began at a very young age,” she said. “My parents took me to Disneyland twice before my first birthday and we made the trip down the West coast as many times as they could growing up. We watched Disney movies in our home and sang Disney songs in the car and I have never grown out of it”.

“I began to order [the Cinderella Latte] on my breaks and shared it with my customers too," she said. "I was usually at the front register at the window so it was easy to visit with them and share this new, magical drink. Making people happy can be as easy as just smiling and sharing something that you’re excited about and that’s exactly what happened.”

After her second child was born, Cox hung up her Starbucks apron to stay at home with her boys. But that wasn’t the end of the Cinderella Latte! She started a small business called Happiest Tees on Earth, inspired by her love for all things Disney. Through her Instagram following she shared about the Cinderella Latte and fans started tagging their photos #cinderellalatte. Now there is even a Cinderella Latte tee!

Almost a decade after its inception, a few news outlets picked up Cox’s story about creating the Cinderella Latte and things really took off. She's been tagged in photos from coffee lovers and Starbucks stores as far away as Romania, New Zealand, Australia, United Kingdom, Panama, Singapore, India, Mexico, and Brazil. A number of celebrities have fallen for the Cinderella Latte too including Mary Mouser and Tori Roloff.

I asked Cox if she had any other Disney-inspired drinks up her sleeve and she shared two others that came to fruition during her time at Starbucks.

Are you ready to take the plunge and try a Cinderella Latte before the clock strikes midnight? That’s Disney talk for when pumpkin spice retires for the year. Do it ASAP! You can order a Cinderella Latte - hot, iced, or as a Frappuccino - whatever your heart fancies. I’ve even tried it with an americano! First, start by asking for a Cinderella version of your favorite drink. Due to the virality of Cox’s creation, your barista will probably know what you mean. But, if not, you can explain that you just want half pumpkin spice and half white mocha as the flavoring.

You’ll smile, they’ll smile, and the joy of the Cinderella Latte will continue exactly as Cox intended.