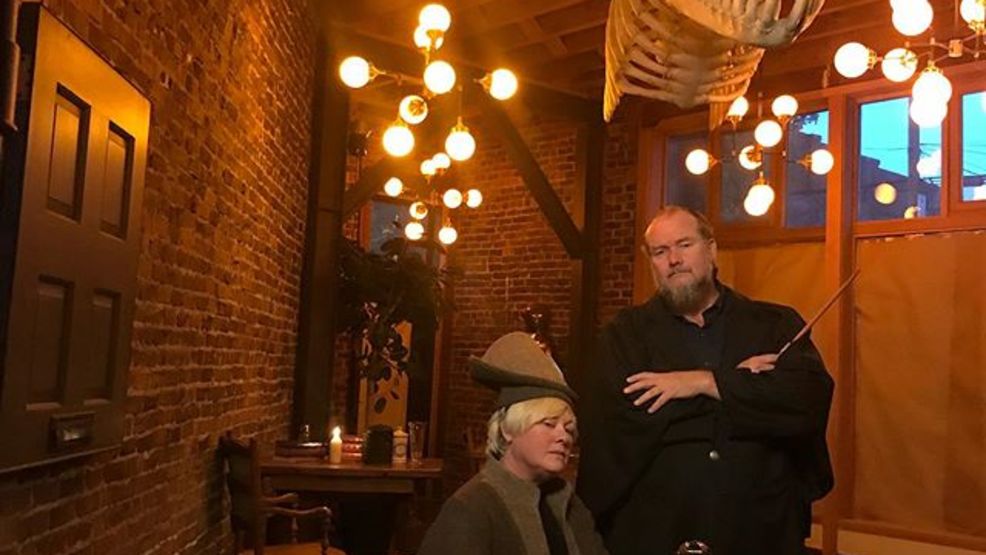 Ballard's getting a Wizard Pub and Wand Shop

Harry Potter fans will want to apparate to Ballard’s wizard pub and wand shop as soon as it opens. The Splintered Wand will hopefully open its doors by the end of the year (awaiting the building approval process), and the grey skies are a perfect Seattle welcome to the wizarding world.

It’s the imaginative creation of Geoffrey T.C. Balch and Widow Balch, and the interior design alone will make you stop in your tracks.

"I wanted a design space that was deliberately overwhelming," said Geoffrey.

The astounding decor will include a 3-foot Ballard sea monster skeleton hanging from the ceiling and a large dragon head crashing through the wall. If that’s not enough, indoor lightning and thunderstorms can be triggered with the flick of a wand (or maybe a switch).

The performative space welcomes all ages, have a wand shop, bar and “Euphorium” for private events. The bar downstairs will be for customers 21+, serving potion-worthy libations and pub fare. Although the drink menu has been thoughtfully fluctuating for the past five months, there's a promise of plenty of smoke and fire.

"The spine of the [food] menu will consist of a sort of pick-your-filling meat and veggie pies and pasties," he said.

On the second floor, customers can cast a spell at the wand shop, Piscataqua & Balch, with their custom-made wand. Upstairs, customers dressed in wizarding garb (also known as playtrons) will find a private event space for tarot card readings, parties and meetings.

Customers will find an interactive twist when they enter the space. The owners are in the final stages of developing an app that will allow users to see resident ghosts on their phone as they explore Ballard’s historic flatiron building. The phantoms have extensive backstories, and you’ll even be able to bring them home with you. The app is set to drop on the same day the bar opens.

The Splintered Wand’s location in Ballard’s flatiron building adds a sense of grandeur to the concept, but Geoffrey says getting certain building permits has been a hurdle. For that reason, there’s an air of mystery surrounding the opening date. But what’s a wizard bar without a little mysticism?