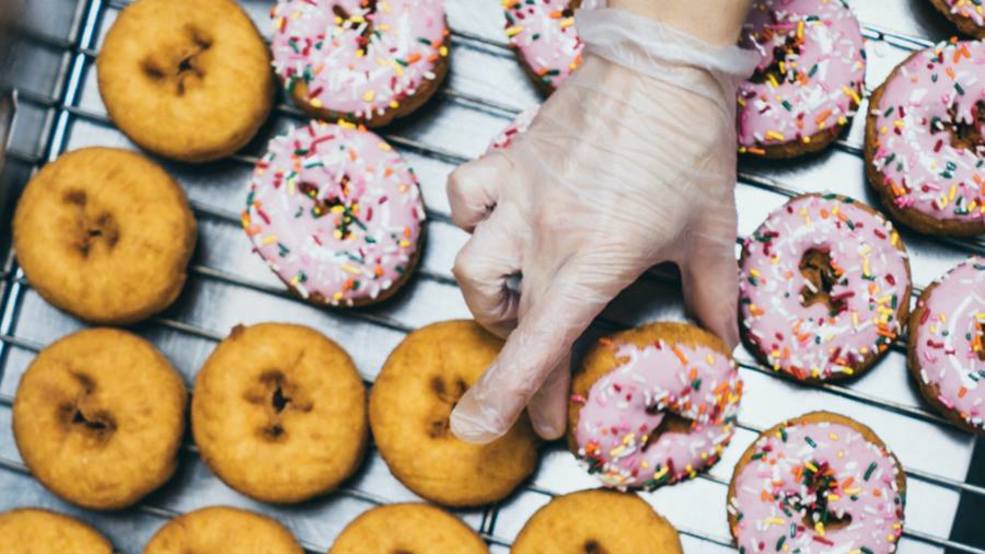 Rocket Donuts is half of one business, the other being Acme Ice Cream. Can you dream up a better combination? (Image: Rocket Donuts Facebook)
SEE MORE

The Best Donuts North of Seattle

Who’s ready to talk about donuts?

All hands up, because yes, donuts are by far the most decadent treat EVER.

Before I spill the best donuts north of Seattle. Which, trust me, are 100 percent worth the drive, let me first share a little bit of donut trivia. Did you know that the shape of a donut is called a torus? It’s their technical geometric term, tori if you’re referring to them in the plural. Just like an inner tube, traditional donuts are a solid formed by rotating a closed curve, especially a circle, around a line that lies in the same plane but does not intersect it (official dictionary definition). No longer do you need to point out “the circle one with maple glaze”. Now you can accurately request “the torus with maple glaze ” and wow your donut-loving friends with your extreme donut fandom.

Truly though, what is it about donuts that draw such a crowd?

It’s one thing when they’re hot and fresh. Another when the glaze or filling are on par. Is it the variety? The fancy topping options? The pairing of a hot cup of coffee or cold cup of milk alongside a perfect cake donut or buttermilk bar?

Whatever it is, consider me sold. I’m a donut-loving girl and I’m raising a brood of donut-loving children. Nothing gets us up and out the door in the morning like scoping out a new donut shop or returning to one of our favorites.

For five years our family lived in Olympia, and down south, there are some decent donuts. Ones that, dare I say, I miss and crave on the regular. But, where we live now, north of Seattle...holy donuts. We’ve found a goldmine of fried dough confection up here!

Open 24 hours a day, Henry’s Donuts is an old-school, no fuss donut establishment. They can’t even be bothered with a website! Too busy making fabulous donuts, I suppose! Don’t be fooled by the simplicity though, the selection and price of their donut spread can’t be beat. Although you can swing by any time of day, since it’s on Broadway in downtown Everett, I’d recommend sticking to daylight hours. And, if you want the best selection, aim for early morning.

The staff is friendly, especially to indecisive kids who are practicing counting out their own money, and based on the full parking lot throughout the day, you know they’re putting out a sought after dessert. Many local businesses buy dozens upon dozens from Henry’s because a Henry’s donut is what everyone wants most of all! Make your way to Everett and them a try!

Our family’s top recommendations: The classics! Maple bars and apple fritters win at Henry’s. I also hear the PB&J bearclaw is worth a try!

Rocket Donuts is half of one business, the other being Acme Ice Cream. Can you dream up a better combination? I mean, donuts and ice cream? It’s out of this world! They serve coffee and espresso too. It’s a trifecta of all things wonderful.

With two locations, one in Bellingham’s Fairhaven district and the other in downtown Bellingham, Rocket Donuts is a fabulous place to visit while exploring the quirky, fun college town of Bellingham. Be sure to check the hours before heading Rocket’s way, they aren’t often open past 3 p.m. and if they sell out, they close early.

Rocket Donut’s case is full of traditional favorites with the addition of seasonal surprises. They also have a monthly donut, most recently a margarita-glazed and a cookies ‘n cream bismark. When you visit Rocket’s downtown location, plan for a photo op by the giant rocket ship in the parking lot. Then, prepare for a tough decision. Donuts? Ice cream? Donuts AND ice cream?

Our family’s top recommendations: Buttermilk bars, hands down. Or the donut of the month, because when it’s gone, it’s gone! The giant monster donuts are super fun for celebrations too.

Prior to a recent trip to Vancouver I asked a childhood friend now living in British Columbia where to get topnotch donuts in her city. Without hesitation she sent me to Lucky’s. Coupled with 49th Parallel Coffee Roasters, Lucky’s recently opened their third location and it’s my hope and prayers that they jump the border sometime soon and launch in Washington.

At 49th Parallel and Lucky’s you’ll experience a hip, classic coffeehouse vibe. Plan to people watch. Plan to order one donut and then return for a another. On second thought, it might be wise to splurge on a dozen. After all, you’ll need a snack while you wait at the border crossing. These donuts are food art in both presentation and taste, a dozen is a completely acceptable and delicious souvenir.

Our family’s top recommendations: Salted caramel old fashioned, lemon meringue, and pistachio glazed ring. But really, who am I kidding, I haven’t tried one I didn’t like.