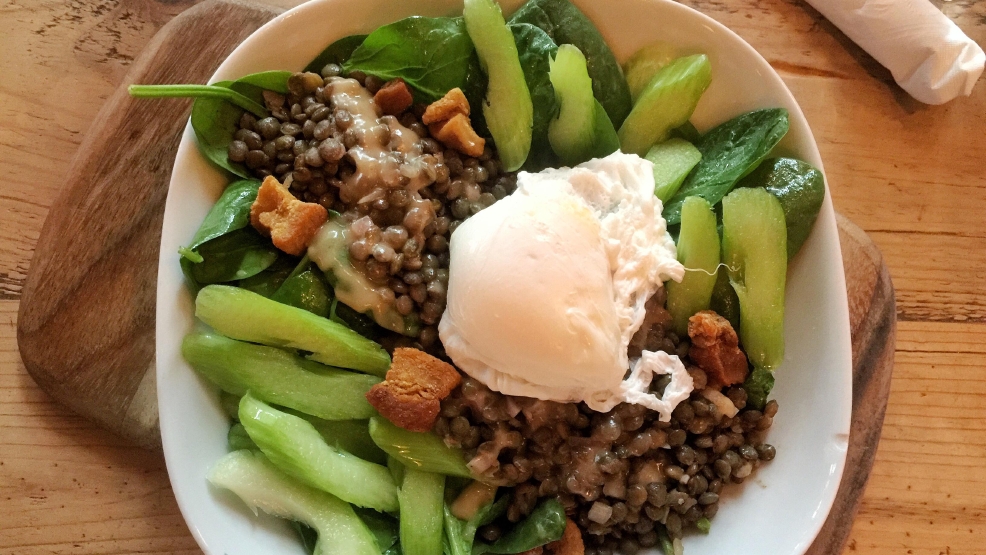 The 5 Best Vegetable Dishes in Seattle

The beginning of the year is a terrible time to start trying to eat more healthfully and be more active. The only vegetables in season are the ones that have pulled the dirt covers over their heads. Describing a lazy person as a "couch potato" never seems more appropriate than in the darkest days of winter, when we try to emulate those root vegetables, hoping to hibernate in our beds.

It's downright tragic that January is the time to reset the diet and exercise routine, not July when the berries are in bloom or August when summer tomatoes are so sweet you can eat them whole, out of hand, like apples. And yet, this is the reality of winter: blankets of darkness and fields of brown.

Thankfully, many of Seattle's best chefs heartily reject the seasonal affective disorder that tries to make its way onto the plate, finding ways to play with squash and broccoli, to make Brussels sprouts and celery feel as though they could compete with butter lettuce and spring peas to be homecoming queen.

Faced with the choice of pushing off your resolution until July or finding a way to eat healthfully in January, I support the former, but am happy to supply you with the best ways to do the latter.

Like comparing San Pellegrino to tap water, the fermentation process improves upon broccoli's ordinariness in ways nobody knew they wanted. Like the light bubbles in San Pellegrino, the tartness dances on the tongue. Popped quinoa, sprinkled generously on top, marries a veneer of healthfulness with the texture of a Cheeto, which anyone would be hard pressed to deny as the epitome of crunch.

That this dish is named after a Seattle rapper is possibly the least confusing thing about it. The stack of delicata squash, smoked avocado crème fraîche, garlic chips (like those puffy prawn crackers from Chinese restaurants), and pickled peppers is as much a salad as it is nachos, and really it's neither of those. But like Picasso's misplaced facial features, it somehow makes sensebeautiful, artistic sense. All the elements are therethe crunch of chips, the avocado, the dairy, and the spice of traditional nachos but they're just not quite as expected.

Lentil Salad at the Fat Hen

One might call it cheating to include a dish garnished with lardons on a list of vegetable dishes. But another, smarter one might point out that the small but powerful punch of adding bacon to spinach, lentils, and celery makes it a far better dish and thus a salad likely to be gobbled voraciously, rather than left to linger in favor of the Fat Hen's more indulgent options. The tiny amount of crispy pork adds crunch and fat to a dish that is otherwise soft and warm, the rare kind of dish that can both comfort with the power of a rich braise and offer promises of healthfulness.

Anyone who's eaten roasted Brussels sprouts knows that the addictive crispiness and caramelized sweetness of the outer leaves is culinary gold. But leave it to the experts at Miller's Guild to figure out how to fry the sprouts in such a way that each entire chunk seems to be layer after layer of those crispy, crunchy outer layers. Dressed with plenty of salt and a squeeze of citrus smoke from the charred lemon, they hardly cry out for any extra flavor, so dipping them into the accompanying harissa aioli is both hedonistic and especially for those seeking healthfulness unnecessary.

This absurdly simple Israeli breakfast stew (available, ironically, only for lunch at Eltana) is comfort food in any language. Roasted tomatoes and peppers cook together long enough to melt into each other, to share their flavors back and forth. The crowning glory is the pair of eggs, poached directly in the stew, sitting on top, waiting for their moment in the sun to leak rich yolk into the rest of the dish. It's the kind of dish you'd want to cuddle with while wrapped in a Snuggie, watching the rain pour down outside, feeling smug about not having to go out in the weather.