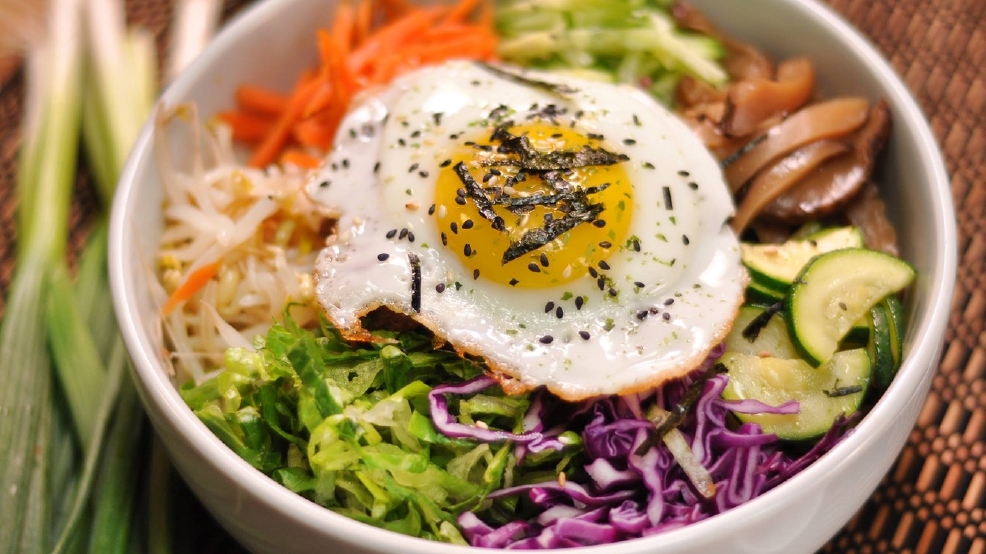 If You Love Bibimbap, Listen Up

Bibimbap. This Korean comfort food is as delicious to eat, as it is fun to say. (BEE-bim-bop, in case you’re wondering!) The word bibimbap means “mixed rice.” At home, most Koreans simply eat it out of a regular bowl, often made with leftover ingredients.

Here in Seattle, you’ll find it at most Korean restaurants; served as a bowl of warm white rice, an array of seasoned vegetables, soy sauce, gochujang (chili pepper paste), sliced meat (usually beef), and then finally topped with a perfectly sunny-side up egg. The dish is visually stunning, with the vegetables often placed so neighboring colors complement each other.

Here are five of the best spots for this extremely satisfying meal.

Chan.
Chan calls itself “Seattle’s only Korean Gastropub” and has a delightfully modern take on Korean cuisine. They serve their bibimbap in a cast iron skillet that cooks the egg and crisps the rice while you’re eating! Located in an alley behind Pike Place, Chan is inspired by chef Heong Soon Park’s favorite places in Seoul, Korea. Pair your Skillet Bibimbap with an S3, a fantastic cocktail made with kai lychee, chili soju, pineapple soju, lemon, and cane sugar.

"There just isn't a lot of Korean food in Seattle," Pak told me back in 2014 when he opened his Capitol Hill restaurant. "There's a lot of Chinese and sushi and Vietnamese, but almost no Korean. That's why I kept the menu simple. I want to introduce people to what Korean food is." Try the beef bulgogi bibimbap at Oma Bap. It's a bowl of steamed rice topped with fresh carrots, seasoned bean sprouts, romaine lettuce, purple cabbage, diced cucumbers, shitake mushrooms, cooked zucchini, specially seasoned beef, and a sunny-side-up egg in the center.

Tofully.
True bibimbap lovers will go crazy for the Dolsot (Hot Stone) version at Tofully - a Korean favorite in the International District. When you order a “Dolsot” bibimbap, it means the egg and meat are raw, and then cooked on the sides of the hot stone as you are eating. The bottom of the bowl is also coated with oil, cooking the rice to a crisp, golden brown.

Bibimbap King.
Try the Bulgogi Bibimbap at Bibimbap King for the perfect sweet/savory/spicy lunch. The dish is assembled right in front of you, and includes a base of steamed rice, beef bulgogi, spinach, pickled vegetables, sesame seeds and an optional helping of kimchi. (Always get the kimchi!) Located on the first floor of the Columbia City, try this the next time you’re wondering, “What should I have for lunch?”

Kimchi House.
At Kimchi House you’ve got lots of options for your bowl of bibimbap. You can pick from beef, pork, chicken, or tofu for your protein, whether or not you want it served hot or cold, and if you’d like a generous helping of their Korean sweet chili paste. If you’re feeling especially hungry, start your meal with their Kimchi Pork Pancake, a crispy and savory pancake filled with pork, kimchi and bean sprouts.