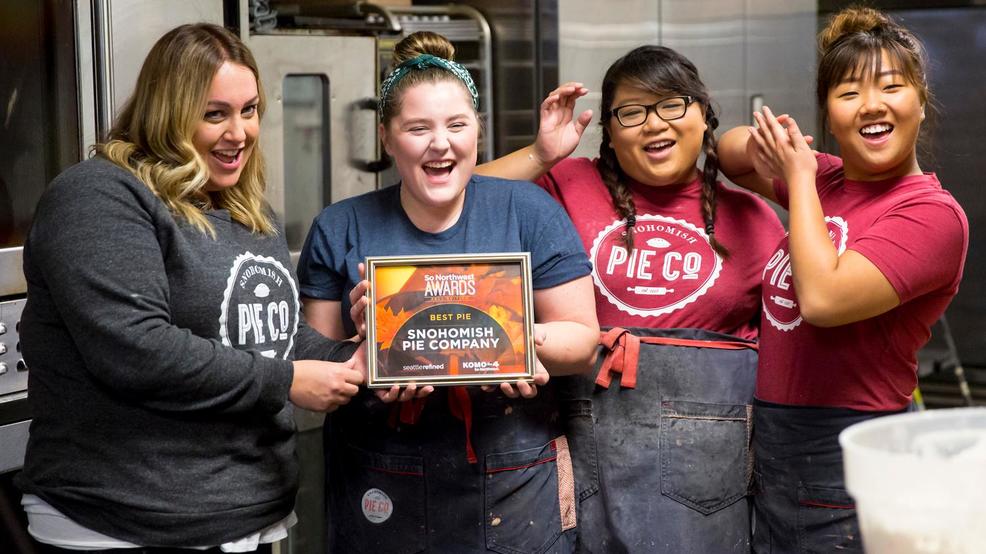 The Best Pie in the PNW Award goes to: Snohomish Pie Company

It's the sweet life for Snohomish Pie Company owner, Jenny Brien, who bakes a little bit of love into each and every slice.

Snohomish Pie Company has churned out exquisite pies for 21 years now. But, it's been Jenny's since 2009.

"I'm a Snohomish girl. I was good friends with the owner, and she was ready to sell," she explained. "I had gone in a couple times just to help her out because I loved baking, I just love to do it. I was seven months pregnant, and she offered it to me and said, 'Hey, do you want to buy the pie shop?' I was like, oh man, I'm having a baby, but then there was just something about it and to have a piece of Snohomish, and have something that means so much to me. And so, my husband and I thought about it, and he was just like, you need to just go for it."

Jenny and her crew spend their days in the kitchen, lovingly creating all sorts of delicious confections. Apple Berry Crumb is the number one selling pie, but Northwest Berry is also a top seller.

"This is what makes a good pie, is your crust. And so, we kind of move down this way where we will lay out all the dough. We then measure it out to seven ounces, which every pie bottom is seven ounces. And then, we put them in stacks of ten. It's our easiest way. And then we move over to our pie press, which is our golden gem around here. It's a lot of fun. You don't find it around in a lot of bakeries, unfortunately. But for us, we get this out of Chicago. This whole thing heats. It gets pretty hot. And, we stick our pie dough right here. We take our two hands and we hold it down, and then it re-heats it, and it comes out, we'll fix it, we top it and we start all over again."

From the pie press, the crew puts the crusts in the refrigerator until they are ready to be filled.

"We mix all the berries by hand and we measure them out into each pie for two and a half pounds. So, each pie is guaranteed to have two-and-a-half pounds of berries in it. Then we top them, and then we freeze them."

All the prep happening while Refined visited Snohomish Pie Company is for Thanksgiving, when the shop will sell a whopping 2,000 pies!

Serious or not, we had to ask the crew to take a quick break so we could present them with their So Northwest Award for Best Pie. Congratulations, Snohomish Pie Company!