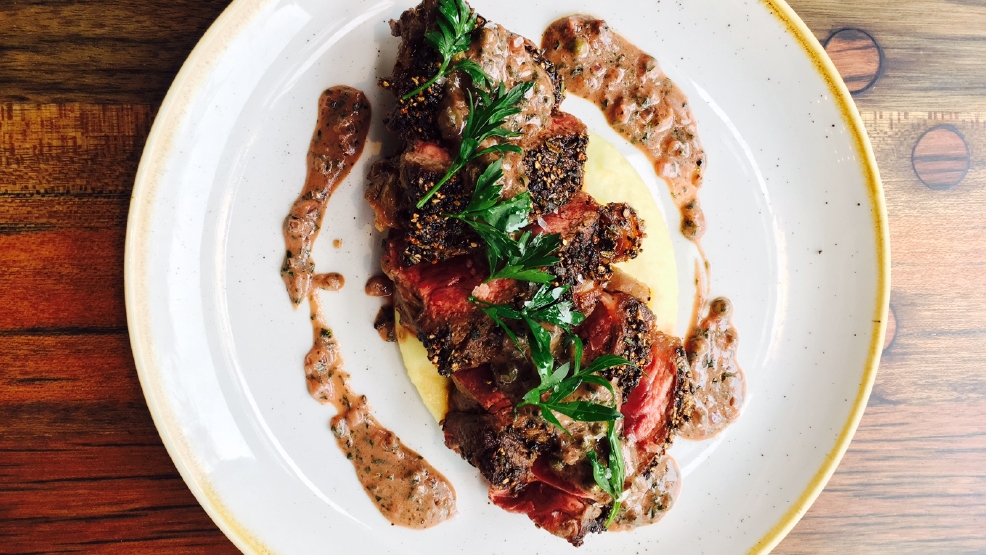 Sometimes, your mind wanders to dinner and you have a craving for steak which must be sated. For when this mood strikes, there are a gaggle of options in the Seattle area to brandish a steak knife. Sure you could make your own steak for dinner (which you really should, here’s a guide on what to consider with Washington beef), but when you want to roll into a restaurant for a steakhouse experience a bit different than the norm, here are four places you must visit.

Bateau
Located on Capitol Hill is Renee Erickson and team’s sonnet to the modern steakhouse. The killer hook for Bateau is their wide swath of steaks that mostly come from their farm on Whidbey Island and are butchered in-house to utilize as much of the cow as possible. The chalkboard in the dining room will show what cuts of beef are available and another nice touch is that you have options for serving sizes to order. In addition to the well-known cuts, you’ll experience parts of the cow that may be unfamiliar and just as delicious. And this is what gets beefeaters coming back to Bateau. Also, be on the lookout on Mondays at Bateau moving forward for their ‘Feast of the Beast’ three-course dinners for $65.

FlintCreek Cattle Co.
After hitting a home run with Fremont’s RockCreek, diners anxiously awaited Eric Donnelly’s follow-up, FlintCreek. And waited some more. But once it opened, FlintCreek joined the conversation of serving up some of Seattle’s finest steaks and chops. And these steaks aren’t confined to cows. As Donnelly wanted to introduce eaters to other types of meat, his FlintCreek offers up bison, wild boar, and rabbit on their menu. Donnelly showed such a deft hand with seafood at RockCreek, he’s exhibiting his skill at this Greenwood restaurant.

Fogo de Chão
For fans of the rodizio-style eating experience of Brazilian steakhouses (churrascaria), the arrival of Fogo de Chão in Bellevue is cause for celebration. As this is the first Fogo de Chão to open in the Seattle-area (which opened on Mother's Day), eaters are ready with their tongs to snap up whatever the gauchos will bring tableside with their knives and skewers. Meat-eaters will have an embarrassment of riches at Fogo like prime sirloin, beef ribs, ribeye, pork ribs, parmesan-rubbed pork, and more (and if you want something lighter and vegetable-focused, their Market Table has a strong array of options). Basically, get ready to chow down with this all you can eat feast.

Heartwood Provisions
Word came through earlier this month that the venerable Metropolitan Grill would be closing this June through August to go through renovations. As one of Seattle’s most popular steakhouses (and a favorite haunt of Russell Wilson), this was a bit of shock. But this was quickly belayed with the news that the Met’s sister restaurant (of the Consolidated Restaurants group) Heartwood Provisions on First Ave would take the mantle of serving up a ‘Met Prime Steak selection’ on their menu with some of the Met staff joining the Heartwood team. Couple this with the Heartwood team’s skill with scratch cocktails and meat eaters have another option this summer to eat up.