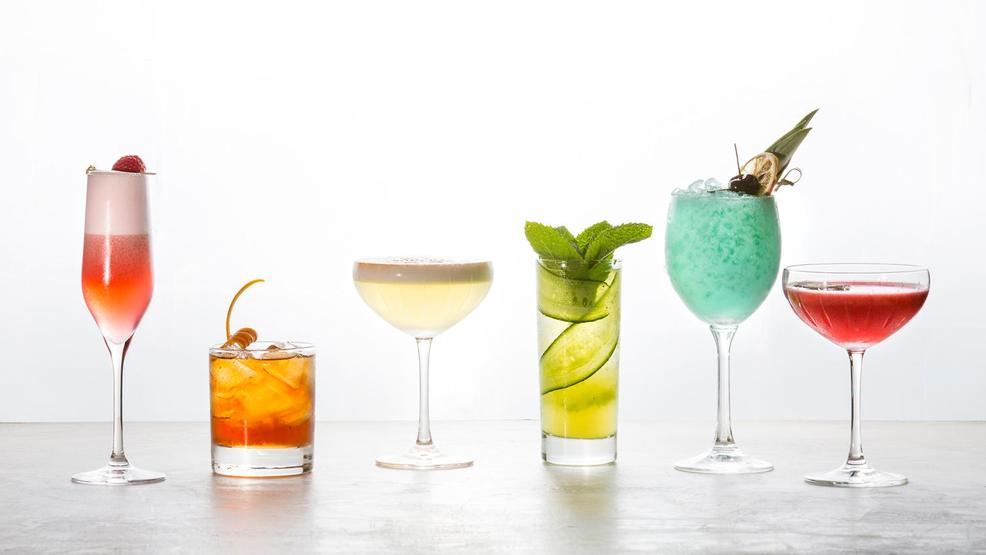 The Fairmont Olympic Hotel will be serving up the Rainbow Pride Flight from June 1-30 to celebrate Pride Month! Each cocktail costs $12, or you can try the whole set for $70 and 15% will go to the Lambert House which supports LGBTQ youth. (Sy Bean / Seattle Refined)
SEE MORE

Get colorful this weekend with local Pride-themed food & drink

It's Pride Month, and you KNOW Seattle is celebrating! We did some digging, and found a couple bars and restaurants that are serving extra fun specials this month in honor of the LGBTQ community. Are we missing any? Email us at hello@seattlerefined.com and we will update this post!

Rainbow Cocktail Flight at Fairmont Olympic Hotel
Terrace at the Fairmont is NOT to be outdone. Instead of one cocktail special - they're offering SIX specialty pride cocktails, in all different colors of the rainbow. Check the photo gallery for more details, but the drinks include: Red Pride (Findlandia Vodka, raspberry and lemon shaken with egg white and served in a flute), Orange Pride (Overholt Rye Whiskey, Sweet Vermouth, and Benedictine), Yellow Pride (Pisco, lemon and chamomile shaken with egg white), Green Pride (Beefeater Gin, elderflower, lime, cucumber and mint), Blue Pride (Bacardi Superior and Ocho, Blue Curucao, pineapple, and coconut) and Purple Pride (Sauza Blue Silver Tequila, lime and blackberry). Can't chose one? Order the entire Rainbow Pride flight, and 15 percent of the cost goes to a local LGBTQ charity.

GLITTERis at Elysian Brewing
More of a beer drinker? Elysain Brewing has got you covered. GLITTERis hits the stage with a fruit-forward hop character featuring blackberry and raspberry purees added into the fermenter and at 4.4% ABV. Elysian Brewing is proud to be the Official Beer Sponsor of Seattle Pride and a portion of the proceeds from GLITTERis Pride Ale benefit the organization. The Pride Ale will be on tap at all 5 local Elysian locations during the month of June.

Pike Pride Ale currently at The Pike Pub
This special beer is a crisp and lightly hoppy tangerine pale ale that was dry-hopped with Mosaic. It comes in at 5.0%, and will be available only on draft. Pike Pride Ale was brewed in support of Gay City and in celebration of Seattle’s LGBTQ+ pride. During Pride Week, Pike encourages every location serving Pike Pride Ale to donate $1 per pint to support Gay City with the goal of raising $5,000. Among other Washington locations, Pike Pride Ale will be featured on the June Beer Flight at Lost Lake Café; poured during Pride weekend at Purr, Teku Tavern; and featured at 5 Point Café’s iconic Pride Parade after-party.

La Cage Aux Folles at The Nest
It's a celebratory drink with Brazilian and island vibes, totally dressed for the occasion. This baby has Novo Fogo Cachaça, Angostura Amaro, Giffard Orgeat, and Lime Juice. The Nest at Thompson Seattle will be serving this drink Pride weekend, and a dollar from each drink ordered will go to the Seattle Pridefest non-profit.

Pride Menu at Frolik Kitchen + Cocktails
The restaurant perches at the top of Motif Seattle, will be hosting several events this weekend. Hosting drag shows, and serving up some Pride-themed drinks and menu items, like the Rainbow Rice Krispy Bites, What Color is Your Pride Zipzicles! Tickets and more info online.

Pride Weekend at Cupcake Royale
Cupcake Royale’s Pride Sorbet will be available Friday, June 22 through Sunday, June 24 at Cupcake Royale Capitol Hill, Ballard, 108 Pine and Queen Anne cafes! They're also serving up 'The Gay' cupcake, with 10 percent of sales going to support the Gender Justice League through the end of June. Great for Pride festivities!