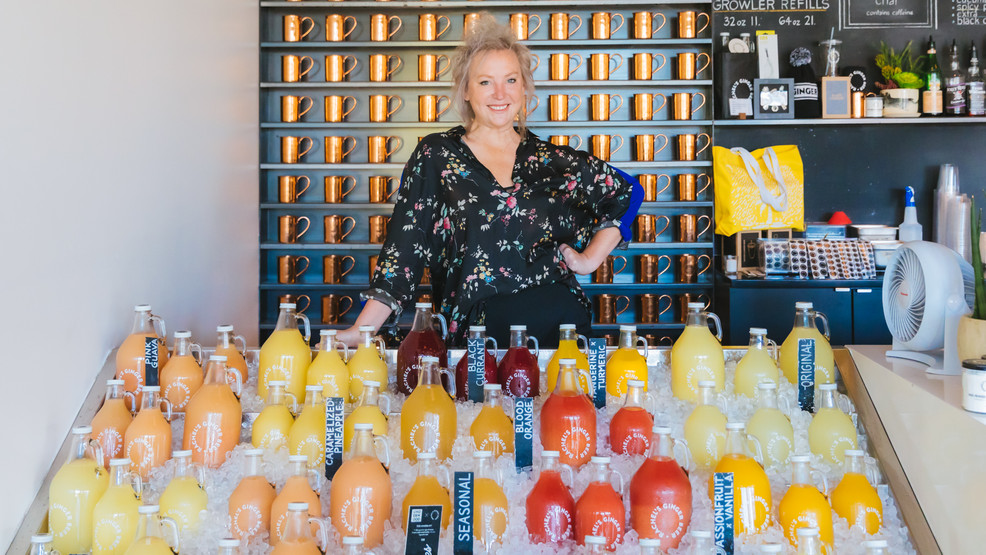 There's nothing quite like travel to broaden your horizons. Sometimes, it is the simplest experiences that spark ideas and innovation. Rachel Marshall of Rachel's Ginger Beer was born and raised in Washington, and fell headlong in love with British ginger beer during a stint in Europe.

"I lived overseas after college," she said. "I was drinking ginger beer in these amazing pubs when I had this AHA moment, that I've never had something like this before. And when I moved back to Seattle in 2008, I realized very quickly that there was no ginger beer here. I thought to myself, very ambitiously - 'I'll just figure it out and make my own ginger beer.'"

And she did. Marshall turned 40 a few months ago. She's very thankful that the idea came to her when she was younger.

"If I'd been 40 and thought about making and selling my own ginger beer, never, never, ever, ever," she said. "But at 28, the world is your oyster. Oh, my gosh, you have nothing to lose. You have no kids, no mortgage, no car payments. You're like, 'let's do it.'"

The big question is, how did she do it? How did she figure out a recipe? The internet back in 2008 wasn't the smorgasbord of information it is today. Google did not have the answers to everything, and YouTube was all of three years old and not the DIY treasure-trove it now is. Life, in short, couldn’t be navigated through your fingertips.

"There was zero information on the internet. It was all trial and error, honestly," said Marshall.

Marshall had her contacts in the hospitality industry already as she'd been waitressing and bartending since 1998. The restaurant industry was extremely instrumental in amplifying her brand. Her bartender friends were her first guinea pigs.

"I was working at Lark at the time, followed by Delancey. My friends were bartending at these places. I gave it to one bartender friend, who gave it to another, who gave it to another. And that's really how it got started. This is a classic example of a ripple effect," she said. And the rest is history. Her product was great, to begin with.

"It took off immediately," said Marshall.

The brew's basic ingredients are simple and high-quality: freshwater, lemons, organic sugar, and strong ginger roots. The flavors are concentrated and bold, and just a splash of your favorite liquor can make a smashing cocktail. Think versatile and delish flavors like caramelized pineapple, blood orange, and spiced Honeycrisp. Marshall talks about easy-peasy pairings.

"Everybody loves a good Moscow mule," she said. "On a Sunday morning, I'd mix European Cava with pink guava ginger beer for a great mimosa. I don't like fancy multi-ingredient cocktails. Bourbon, vodka, rum, gin, all the spirits work with our ginger beer. That's not an accident; rather, it was super intentional on our part. I want people to be able to make a great cocktail easily and quickly."

Circa a decade ago, Marshall's ultimate goal was to get into the farmers market.

"I was walking through the Capitol Hill Farmers Market one day, and it was hot. I thought to myself. Holy smokes, if we could get ginger beer in here, that would be the golden ticket."

Marshall set her mind to it and made it happen. Luckily for her, the point of entry was cheap.

"There's extraordinary exposure, and you can make money immediately," she said. "You pay them a percentage of your gross sales. So if you do well, you pay a lot. If you do poorly, you don't pay much."

An invitation to open up in Pike Place Market followed. The day Rachel's Ginger Beer opened shop, they already had a huge fan base from the farmer's market.

"We had our following already in place," she said.

Behind every successful woman, there is a tribe of other remarkable women. Marshall is surrounded by amazing female friends and mentors.

"It's really important for women to be surrounded by women. Pamela Hinckley, Molly Moon, and Robin Bigelow have been some of my biggest female mentors. I found out very early," said Marshall. "Find the people that are doing what you want to do, and have made it where you want to be, and make them mentor you. Bug them until they mentor you."

Besides the phenomenal mentorship she received, Marshall also attributes a big part of her success to simply showing up. Of course, you need to have a great product and not be flaky about deliverables too. Marshall speaks of the lessons learned about fortitude.

"The farmers' markets were a really good exercise for me because you have to show up. Otherwise, you lose your spot," she said. "So you show up, come hail or rain or sunshine. Every single Saturday."

The business has grown in leaps and bounds over the years, from a small stall at the farmer's market to a huge empire. It's by showing up that Marshall found her village, and eventually her empire.

"It's pretty incredible. I made lifelong customers at those farmers' markets," she said. "I met pregnant women who were craving a crisp ginger beer nine years ago, and now I have their nine-year-olds come to my store and hug me tight. That's a testament to showing up."