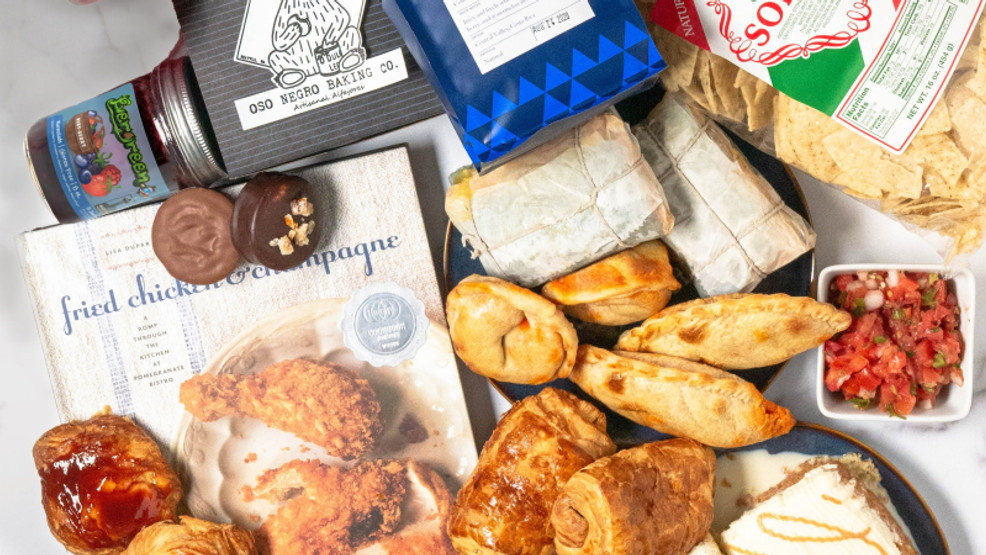 Food Tours to Boxes: How one Seattle biz supported itself (and others) in the age of COVID

Popcorn is listed right next to Rowan Ring's mom, brother and sister in his dissertation acknowledgments.

"I am obsessed with popcorn, always have been, always will be," he said. "I don't eat breakfast or lunch, but I will snack on popcorn all day."

This passion for making (and eating) popcorn led to Ring making it for others, turning into a "surprising little business." Cobb's Popcorn was the brainchild of Ring and his friend/business partner, Erin Cobb. It was only supposed to be that, a side hustle, but it got to be too much as demand grew — they decided to put all their time into their business.

The duo landed their dream spot about 18 months ago — the only location they thought Cobb's Popcorn could work: Pike Place Market. They were in the midst of planning an anniversary party when Washington shut down in March because of COVID-19, and they were forced to close their doors.

"We were stuck in the water," Ring said. "As we were brainstorming how we could kind of maneuver through the unknown but still stay safe, Savor Seattle reached out to us asking if we would be interested in wholesaling because they were interested in doing these boxes."

Savor Seattle Food Tours in Pike Place has been introducing locals and tourists alike to restaurants in the city for more than 13 years. When the pandemic shut down their tours, they had to figure something else out, leading to the first of many food boxes they'd curate supporting local small businesses — a brand new endeavor for founder and CEO Angela Shen and her team.

"We thought it was just going to be an experiment. We didn't know it was going to work," she said. "Can we sell 48 boxes? And we did [...] And now this. I couldn't believe that it took off from that point. It just happened so fast."

In just over eight months, Savor Seattle has contributed more than $1.4 million in direct sales and promotional support to more than 150 local businesses and donated more than $65,000 to nonprofit organizations through box sales.

"Being involved with the Seattle boxes has been pretty much a godsend for us," said Ring. "It was just one of those moments where myself and my business partner looked at each other and said, this is something we have to do not only for our own business [...] but for the greater good of Pike Place."

When Shen moved to Seattle in October of 2006, she was in temporary housing two blocks from Pike Place. It's where she did all of her shopping, and she was continually astounded by the incredible bounty of fresh food and produce.

"I had never lived in a place where so much of its identity can be tied to the food scene," Shen said. "That's really different; our identity as a place is very tied to supporting local food. And that's pretty magical."

Food has always been at the center of her life, and she was constantly getting restaurant recommendations of places for her to try in Seattle. But she couldn't afford to try them all — and the idea for Savor Seattle was born.

"What if for the price of eating at let's say one restaurant - I could instead try five, six, seven or eight places?" thought Shen. "At that time, I thought I was inventing the paper clip. Then a little Google search later [...] what I was thinking of was a food tour."

Nearly 14 years later, Savor Seattle is the #1 rated food tour in Seattle and rated one of the Top 10 tours in the country on TripAdvisor, has a 5-star average rating on Yelp and has been featured in national and international publications, including Bon Appétit and Travel Channel.

Shen said COVID-19 felt overwhelming and heavy like it did for essentially everyone. Having relatives in Hong Kong and China going through shutdowns before the United States helped her prepare for what was coming.

"I was warning my team when it hit Europe that it was only a matter of time," she said. "We need to be thinking about what that looks like when it does - not if, it's when."

And when it did, it wasn't easy. Shen said she stopped paying herself immediately and her entire team took voluntary pay cuts to minimum wage, but she ended up having to let 12 people go.

"Every day felt like a whole week had passed during those first few days of COVID," she said. "So much was happening each day."

Savor Seattle's beta-test for the Iconic Market Box launched the weekend before Gov. Jay Inslee's "Stay Home, Stay Healthy" order went into effect late-March. The overwhelming response they received the weeks following was unexpected. The continued success allowed her to bring back half of the people she let go who were able or wanted to come back. The peak for sales came around Mother's Day.

Cobb's Popcorn first appeared in one of Savor's boxes in April. When they were first approached, Ring said they weren't sure they were a good fit — keeping up with the demand might be difficult, but he said they "bent over backward" to help them.

"It really struck us that this is not just a company that is trying to go for a cash grab," Ring said. "This is way more about supporting as many local, small independent businesses as possible."

Cobb's has been featured in several boxes, including the Iconic Market Box, the Mother's Day Box and the Halloween Box.

Savor Seattle had been curating boxes for about two months when George Floyd was killed by police in Minneapolis. In the days and months that followed, protests erupted in Seattle and around the world against police brutality and systemic racism, and in support of the Black Lives Matter movement.

"I think Angela is brilliant to put the boxes together the way she has done," Moodie said. "I have been in her boxes in several different settings, not just the Solidarity Box, although I thought that was particularly impressive."

After the Solidarity Box came the Hispanic Heritage Box, then the Rise for Equality Box supporting women-owned businesses in honor of Ruth Bader Ginsburg — each one directly supporting small businesses from different communities, as well as $5 from each sale going toward a nonprofit like Black Lives Matter Seattle-King County, CASA Latina and ACLU. Shen worked with Laura Clise, the founder of the small-business directory Intentionalist, to find businesses for some of the boxes, noting how they are both passionate about magnifying underrepresented voices in Seattle.

"As somebody who is a person of color [and] a woman, I know what it is like to be an underrepresented voice," Shen said. "I work with so many incredible artisans that are so passionate about what they do [...] It's not for lack of great products, it's just not having a platform to springboard from."

Savor Seattle has sold more than 15,000 boxes since they began this journey nearly nine months ago, but as 2020 comes to a close, Shen is faced with what the future of her business looks like.

"We've spent a lot of effort and energy working toward, you know, helping other small businesses survive," she said, "but the question is, can we survive?"

While they want to continue to support small businesses with food boxes, the answer to how they can sustain them long-term is still unknown.

"The reality is that we too are a small business, run by a small team of eight people," Shen said. "Our ability to survive and thrive in 2021 will be contingent on customers continuing to rally and champion our cause, as well as much needed local and federal funding support for small businesses."

Shen and her team have been busy putting together several holiday boxes — like their Sweet Treat Box, featuring a handful of goodies including four cookies from local pastry chef Kyle Smothers, whose team recently won the second season of Food Network's baking competition "Holiday Wars."

While Savor Seattle ponders the future and looks forward to the day they can resume food tours, Shen said the experience of curating these boxes has shown her just how passionate Seattleites can be.

"We've found that people care a great deal about saving small businesses and standing up for social justice causes," she said. "There are a lot of people in Seattle who have huge hearts and want to do right and want to help."

Savor Seattle is doing free shipping and local delivery for all boxes. The last day to get in an order for free shipping to arrive in time for Christmas is Sunday, Dec. 13. You can purchase boxes online. Disclaimer: While some products, services and/or accommodations in this post were provided without charge, all of the opinions within are those of the author and the Seattle Refined editorial board.