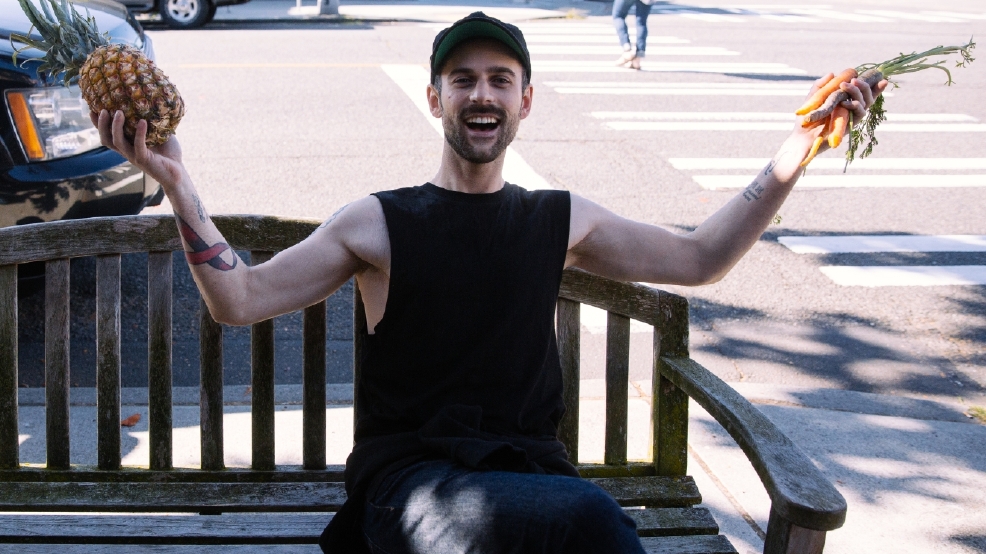 Take a selfie with some produce and hashtag #DrinkGoodDoGood, and 10 pounds of produce will be donated to communities in need! (Image: Joshua Lewis / Seattle Refined)
SEE MORE

Ryan Lewis really wants you to eat your fruits and veggies

"I’m all about healthy living,” said Macklemore’s Grammy-winning producing partner as we sit down to chat at Serendipity Café & Lounge in Magnolia. The news that Lewis is partnering with Naked Juice to use selfies to fight food deserts just hit the wires – and I had some questions.

First, let’s back up – what is a food desert? Exactly what it sounds like; a community that doesn’t have access to quality, affordable produce. Neighborhoods in food deserts are more likely to eat the cheap fast-food options because they literally don’t have any other options.

“For me, hearing the statistics that one in 10 Americans is living in a food desert is kind of amazing, in a bad way,” said Lewis. “That’s 30 million people.”

When he heard about Naked’s #DrinkGoodDoGood campaign, it was a no-brainer for him to collaborate. Naked Juice has already donated 250,000 pounds in partnership with Wholesome Wave, but if you use the #DrinkGoodDoGood hashtag in a selfie with some produce, Naked is going to donate 10 more pounds of produce.

“It’s better to get creative with [the selfies],” said Lewis. “You can look at my references – I’m not claiming mine are the best but they’re not bad.”

Traded in my drumsticks for celery sticks today to do some good! If you take a fruit or veggie selfie like mine, @NakedJuice will donate 10lbs of produce for communities in need. #DrinkGoodDoGood #sponsored A photo posted by Ryan Lewis (@ryanlewis) on Aug 15, 2016 at 10:40am PDT

Lewis grew up on the South Hill of Spokane, and while there were plenty of home cooked meals, he was also a typical kid.

“My mom was pushing broccoli hard, but I’d also get on my bike and go get the Quarter Pounder with Cheese, you know? Like any American boy.”

Lewis said he was lucky to eat OK growing up, but when he would bicycle around to eat out, his options were the McDonalds, the Albertans or Little Caesars Pizza.

“My parents did a pretty good job trying to force good food on me,” he said. “But if you don’t have access to all the major produce that’s a problem.”

Besides the McDonalds every now and then, Lewis has grown up to really embrace eating and living healthily – it’s not an act for this Naked partnership. He spoke at some length about his decision to go on the Paleo diet last year, and how eating while on tour is really difficult.

“Touring is the hardest place to period to eat well,” said Lewis. “Especially if you get into a good rhythm before you leave - like I wake up, have juice or a smoothie, hit the Whole Foods, stay away from carbs – and then you get on the road and before you know it you’re in the middle of nowhere in Texas and you’re starving!”

While he wasn’t on his Paleo game as much as he wanted to while on tour, he said it changed his foundational eating. His go-to meal is steak, eggs, kale salad and a paleo treat.

“A paleo treat is like bacon. It’s technically paleo, but it’s horrible for you. So it’s like paleo dessert.”

"The closer you can get to eating a little bit throughout the day of those good things, rather than starving yourself and then ending with a triple quarter pounder, the better,” he said. “You gotta hold back! We’re adults now!”

Which led me wanting to know his favorite meal – shockingly he pointed out that I wasn’t the first to ask him this question (burn Ryan, I’ll try harder next time).

“I love Italian food. I’d probably have to go with something in the Mediterranean/Italian world,” he said. “Although I also love clam chowder in the bread bowl.”

We wanted to stay for breakfast with him at Serendipity just to see what he ordered.but we thought we’d let him eat in peace (he just returned from his This Unruly Mess I’ve Made tour, and heads out on the Washington Camping Trip next week). We snapped a quick #DrinkGoodDoGood produce selfie with him, complimented him on the new “Spokane Boy” tattoo on his forearm, and left feeling hungry for a Quarter Pounder.

Joking! In all reality we left believing in the campaign, and that Lewis feels strongly and passionately about it. You can bet we will be telling everyone we know to use that hashtag – remember, 10 pounds of food for every selfie posted with it.

Local artists + good causes = our jam. Love you Seattle, and thanks Naked and Ryan (not to be confused for Naked Ryan) for taking the time to talk to us. See you at Bumbershoot!