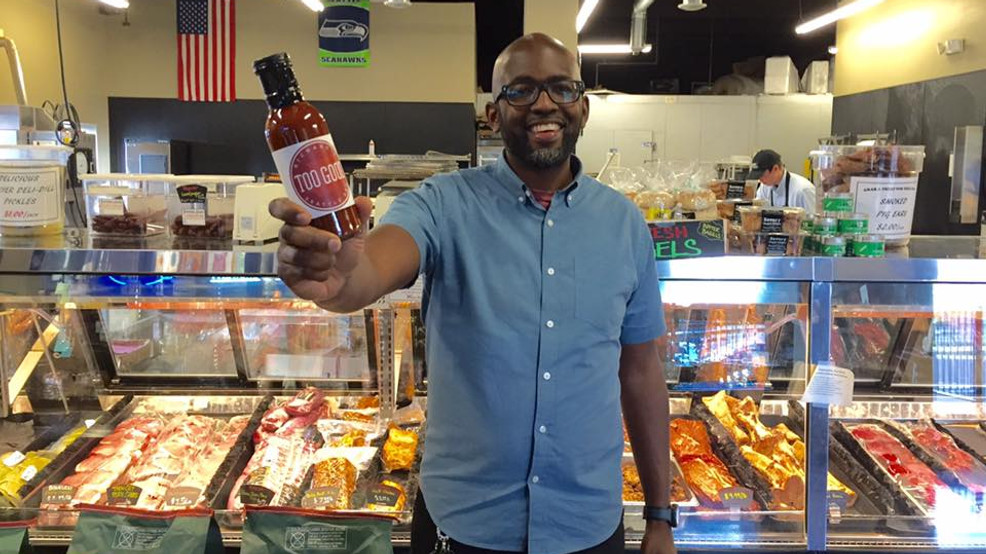 Richard Mullen loves food. I mean, yes, most people do, but for Mullen food has always meant more than just sustenance. It means love. It means community. His mother, who worked full time at Boeing in Des Moines, WA, somehow had a home-cooked meal on the table every night for her four sons and husband. It was not only the tastes of those dishes but the smells that got him hooked. Pot roast, buttery potatoes, succulent meats on the grill. Their home became the gathering spot for all their family and friends. Now, Mullen and his wife Lauren, along with their two children, have made their home in Seattle the gathering spot, and he is the chef.

Mullen works full-time as a social worker, running the African American Family Support Program at a local King County non-profit, supporting individuals with intellectual and physical disabilities. But he’s always had that entrepreneurial spark, that creative side that looked for that distinctive hole in the marketplace and then tried to fill it. When his friends sat around his table and recommended that he bottle his delectable blend of spice rubs and barbeque sauces, Mullen saw that hole and knew he had a unique brand of spackle.

“Lauren and I lived in a little 900 square-foot home,” he said. “ I went into our kitchen and just started mixing things. Lauren was my main taster. The first seasoning that I felt was a success we named ‘Richards Too Good Smoking House Seasoning.’ The smell reminds me of home. It takes me back to when my mom and dad were in the kitchen mixing it up for us kids.”

After a lot of trial and error, Mullen realized he needed to do this right, starting with incorporating all the regulatory rules used to bottle and seal foods. He started a Kickstarter campaign, raised twenty-three percent over his initial goal and leased a professional kitchen at 21 Acres, a sustainable farm and market in Woodinville.

“I was determined to present something to the people that would give them a sense of community,” he said. "A reason to come together. Food has always been a link not only to community but a link ethnically, as well. It brings people of all different skin colors together.”

Before COVID, the Mullens would have everyone over. “We called these dinners the ‘barbeque blessings,’” he recalls. “Where we would get together and eat barbeque and be with one another. People would share their stories. It all comes out over a hot plate, right?”

He named his rubs and sauces Richards Too Good because he wanted to make his products, not just good, but too good.

Now Richards Too Good is sold online and in local stores. The products are low sodium, gluten free, vegan, and don’t contain the fillers most sauces and rubs contain. Mullen purchases all his ingredients locally.

As the momentum builds, his next step is to open a catering company with pop-ups in wineries and outdoor venues in the summer.

“When people think of barbeque,” says Mullen. “They automatically think of North Carolina or Texas. I want to bring that culture to Seattle.

Bringing people together and making sure that they are thriving is his passion, whether through food or his social work. “I want to give people a sense of belonging,” says Mullen. “No matter who they are or where they’re from or what they believe, everyone should have a place at the table.”