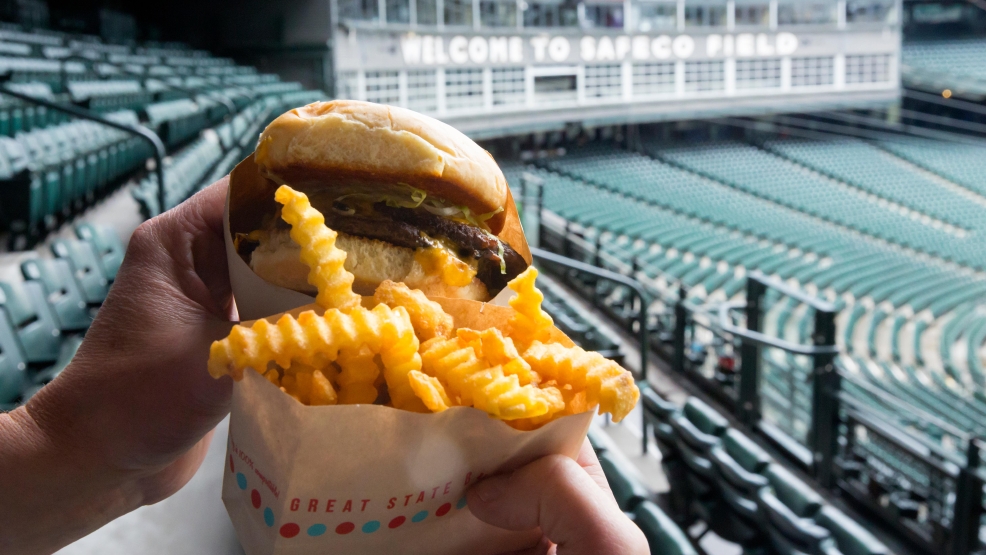 Go on, stuff your face at Safeco Field this season

Play ball! And if you want something to nosh on while you're at the ol' ballyard to see the Mariners, Safeco Field has you covered. As hope springs eternal, the arrival of baseball signals warmer climes ahead and with that is Safeco Field's annual menu preview of what's new and fresh to eat when our home nine takes the field this spring, summer, and (hopefully) fall.

As these menu previews have allowed a sneak peek at what's new for this upcoming season, eaters of Seattle and fans of the Mariners have been able to find the best of both worlds at Safeco Field. When Ethan Stowell started collaborating with Centerplate (the group that manages the food and beverage offerings for Safeco Field) the food choices at the Safe have grown by leaps and bounds. Local producers, local breweries, local distilleries, and more are part of the Safeco Field experience. In the years since, Safeco Field is the trendsetter for food in Major League Baseball stadiums, and you'll now see other stadiums stepping up their game. But with this preview, Safeco Field and their food partners have raised the bar yet again.

When Ethan Stowell looks at Safeco Field, he thinks of it as a 45K seat restaurant with a four-hour window of service. Partnering with Centerplate and Safeco Field's new Executive Chef Taylor Park, they've been able to have fun with the food offerings, good partners, and good products to work with. Here are some of the highlights of what to keep your eye on and what to get your tastebuds ready for this season.

The 'Pen Refresh. The 'Pen continues its evolution for food, drink, and good times with new food concepts from some Seattle hotspots. Look out for Great State Burger from Josh Henderson slinging his take on burgers (single/double patties and veggie available). Capitol Hill's Poquitos takes the reigns at Edgar's Cantina and Edgar's Tacos. Definitely keep an eye out for their chapulines. If you're familiar with Oaxacan food, you'll know what this is. If not, they are grasshoppers. That's right, toasted grasshoppers with chile-lime salt. Dig in to your inner fear factor and snack on some bags. I like them as a topper for tacos. Try them, you'll survive. Elsewhere in The 'Pen, Stowell brings over his Ballard Pizza Company and Dynamite Chicken to The 'Pen; as an unabashed fan of fried chicken, I can't wait to get my hands on this. Uptown China, the longtime neighborhood restaurant in Lower Queen Anne is part of The 'Pen as well, serving up classic Chinese-American dishes like General Tso's and Beef & Broccoli.

Cool treats. When (if?) the weather heats up in Seattle, Safeco Field has a few new options for cool treats. Rita's Italian Ice of Kent will have five locations around the ballpark serving up freshly made frozen custard, gelati (Italian ice layered with custard), and a few other chilling snacks. Near Section 132 on the Main Level, the Frozen Rope Sandwich Company will offer made-to-order ice cream sandwiches from Hope's cookies with ice cream from Snoqualmie or Lopez Island Creamery. If you're craving root beer floats, they've got you covered as well. And they have hard root beer floats for the 21+ set.

The Official Hot Dog of the Seattle Mariners. Fletcher's returns to the Mariners with the original all-beef frank recipe that was served during the Kingdome's heyday. They've recreated it for Safeco Field and it's available at concession stands everywhere; this hot dog will channel into your ballpark nostalgia of yore.

Beer, beer, and more beer. As befits Seattle's craft beer rep, Safeco Field continues to lead the way in unique and local beer experiences. Like barrel-aged beer sitting alongside cask-conditioned ale near Section 129 on the Main Level. Northwest breweries like Georgetown, Black Raven, and Silver City are offering their small-batch brews. Hop Valley Brewing of Springfield, OR will bring their beers to a new location near the King's Court in left field. Look out for a bright green shipping container with rotating tops.

And so much more. That's just a few of the new options available this upcoming season at Safeco Field. Other likes include freshly-roasted nuts from CB's Nuts, Caffé Vita as the new coffee provider to Safeco Field, cocktails from Heritage Distillery in the Third Base Terrace Club, Columbia Winery as the new 'house' wine, and much more await eaters and drinkers as they take in a game this season.

The Mariners' home opener is this Monday April 10. There is plenty of anticipation for this season and I can't wait to see Robby go boom, Felix drop another K, and Edwin Diaz strike out the side. While there will be plenty of action on the diamond, Safeco Field will have more than enough hits with food and drink to have visitors eating and drinking well all season long.