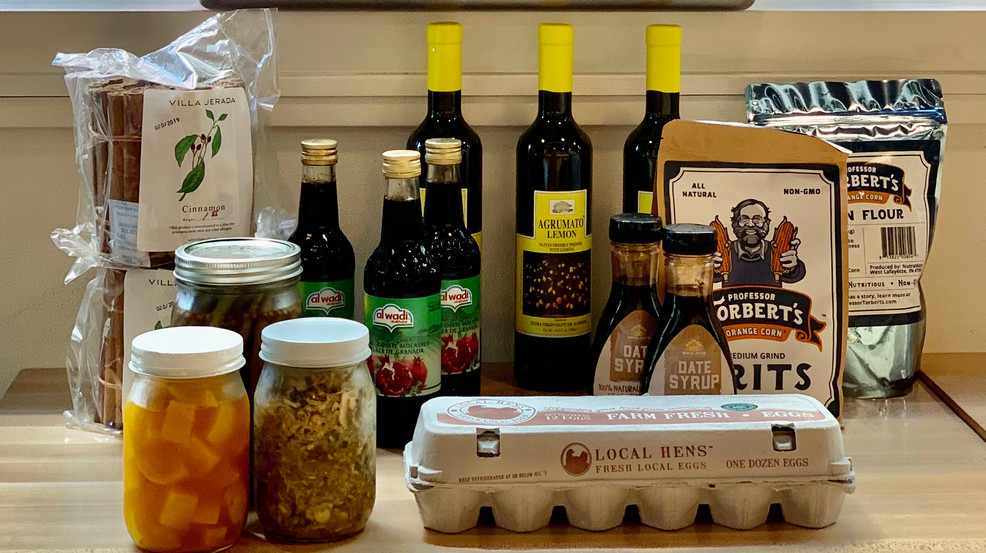 Restaurateurs have gotten increasingly inventive; many menus now offer pantry goods alongside take-out and delivery meals. It’s a trend that seems to benefit everyone, and we’re loving the chance to stock cupboards and fridges with fresh, locally-sourced treasures.

In Magnolia, Mondello Ristorante Italiano continues to feed loyal diners at mealtime, and the venue has new grocery offerings too. Purchase fresh, house-made pastas and sauces to cook at home, along with other tempting products from Italian olive oil, cold cuts and fresh burrata to olives and bruschetta toppings. Don’t forget sweet finales like apple tarts and tiramisu, too.

Let your Island Soul order transport you on a tropical getaway, thanks to accompaniments like Pink Ting Jamaican Grapefruit Soda, liquor packages (think Red Stripe and rum), plus bottles of Bobbañero Hot Sauce. And speaking of condiments, Revel finds a silver lining in finally selling sauces that customers have been asking about for the past decade (think house-seasoned tamari, Korean chili paste, and nam prik).

We recently caught up with Eight Row’s Chef David Nichols and brother/co-owner Ian Nichols to learn about this new trend.

Seattle Refined: Why have you decided to offer pantry items in addition to takeout meals?
Eight Row: One of our main objectives is tell the story of the American farm (in our case, a focus on Washington orchards), with a particular emphasis on creating conversation about highlighting the people behind the produce. To offer pantry items is an opportunity to engage customers and tell our story; it’s an opportunity to connect our patrons in green lake with producers, their hard work, and our nostalgia for farm life.

We don’t expect this effort to make a huge revenue impact, especially since social distancing limitations greatly reduce our capacity to take customers. But that’s totally fine. By presenting items like our own orchard honey, hot sauces, house pickles, and also a number of items from stellar producers, we gain a new forum to get people excited about what we’re doing.

Has this concept been well-received?
The reception to the idea has been very well-received by existing patrons. [...] we’re hoping to lure in some curious new customers who are less familiar with what we’re up to.

How often will you rotate these items?
These decisions are made on a weekly basis, and are based on what’s coming in from the farms.

What items are you most excited about on the pantry menu?
We’re excited to offer our hot sauces, pickles, preserves, honey, etc. Those are items that our family has always made. Traditions passed down from our great-grandparents. We are also excited to feature individual producers as we offer limited amounts of fresh produce, eggs, and plants.

Can you talk about your alcohol offerings, too?
We started selling a select set of batched cocktails recently. Nearly all of our cocktails are named after treefruit cultivars. Such as Goldspur, which is an amazing cocktail named for an apple variety discovered by legendary orchardist Grady Auvil, whom you can partially thank for why Washington became such a powerhouse producer of treefruit.

One exception to the cultivar rule is a cocktail called Trees Have Standing, which is a reference to a famous and poetic dissent written by Supreme Court Justice William O. Douglas. It’s built around Noble Oak bourbon; for every bottle sold, Noble Oak plants a tree. Both Auvil and Douglas are central Washington legends. And these cocktails are a fun way to talk about some of the other folks who grew up in orchard country.

We spent months overhauling our wine program, but on account of the crisis we weren’t able to debut it. So alongside our pantry items we’ll be offering a number of new wines, which will be organized into thematic categories to reflect the new wine program.

I’m particularly excited about some new Mexican wine offerings. We’re also building up a bottle supply from our talented beer producers since our taps remain shut for the time being. We have a great and growing cider selection as well, including Son of Man’s Basque-style sagardo and a stellar lineup from Alpenfire, Washington’s premiere craft cider growers.