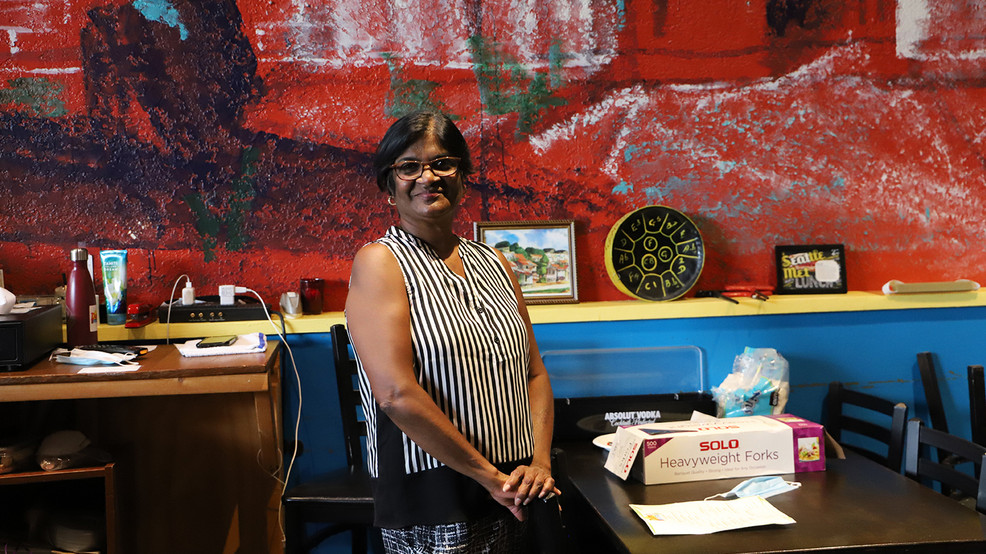 When Pam Jacob first visited Seattle decades ago, everyone she encountered was kind and respectful - a stark contrast to the notorious “Seattle Freeze” that we hear so much about. Jacob was blown away by the hospitality and also loved that the city was clean and peaceful. After facing some financial difficulties and losing her mother in her native Cunupia, Trinidad, she decided to move here for good in 1994.

She worked as a housekeeper for a while and would sometimes cook for her employers. Later, she started catering small parties and events, and her fare was always a huge hit with long lines. Guests would promise her that if ever she opened a restaurant, they would come. She began envisioning opening her own place. Though she was happy with the transition to Seattle, she found that one thing lacking was enough flavor in many of the foods she tried around town. Pam’s Kitchen, her popular Wallingford restaurant and one of the only Caribbean restaurants in Seattle, is Jacob’s way of filling that gap.

“I want to give them some spice in their life! I did this for [my customers],” she says, explaining that bringing an authentic experience to this region was a major motivator in her journey as a businesswoman.

The menu at Pam’s Kitchen, filled with salivating entrées and sides, does just that. Foods like jerk chicken and curry-spiced meats are always popular with customers, and some of the more adventurous visitors will sample the savory goat. The sides, breads, desserts and creative cocktails are reflective of the various cultural backgrounds that influence West Indies cuisine.

As a true chef, Jacob does not catalog her culinary creations.

She puts her heart into every aspect of the restaurant, from shopping for fresh ingredients and showing up in person every day to make sure things are being run the right way.

“I’m not an owner who just leaves; I want to know what is going on in the kitchen,” declares Jacob.

That investment extends to her customers as well. Before the pandemic, Jacob was known for socializing with patrons, going from table to table with warm greetings and conversation.

“I have the best customers. I love [them],” she says. Now that the restaurant is only serving food to-go, she misses those interactions, along with special features like Pam’s Jams, social events with live Caribbean music, bringing people together and more rhythm to Wallingford.

The feeling is mutual: her customers adore her. Jacob recounted how a pair of brothers once invited her over and cooked dinner for her at their apartment to show their appreciation, and how one man had called her soon after COVID hit and restaurants had to suspend dine-in options and bought a $500 dollar gift certificate.

“I want you to stay in business,” he said. GoFundMe donations also poured in, helping her keep the lights on at a time when many other establishments in the city were forced to close their doors for good. Later, in the wake of George Floyd’s death and a reexamining of racial justice across the country, Jacob felt even more warmth from the community.

“We want you here,” some said. Many Seattle residents made a conscious effort to patronize more Black-owned businesses, which resulted in an uptick in orders. Some days the restaurant even ran out of food. Others told her that her restaurant is their favorite, which she explains was “better than [a] Yelp [review].” For Jacob, her idea of the American dream “is not driving a Tesla or having a huge house - it’s being accepted, and my food being loved.”

Although she is grateful for the support and success, operating Pam’s Kitchen has not exactly been effortless. It took five years after opening to build up a fairly steady clientele, only to have to change locations. Things have been up and down since moving to Wallingford. She is reluctant to add to the menu because on days when specials don’t sell, she wastes food and money. Advertising is expensive, so she relies on word of mouth. Added to those challenges is a global pandemic, and naturally Jacob can grow frustrated. However, she’s not going anywhere if she can help it.

“I can’t give up the restaurant. I haven’t seen the end of this restaurant yet. There is potential. I have to see it to the end,” she says.