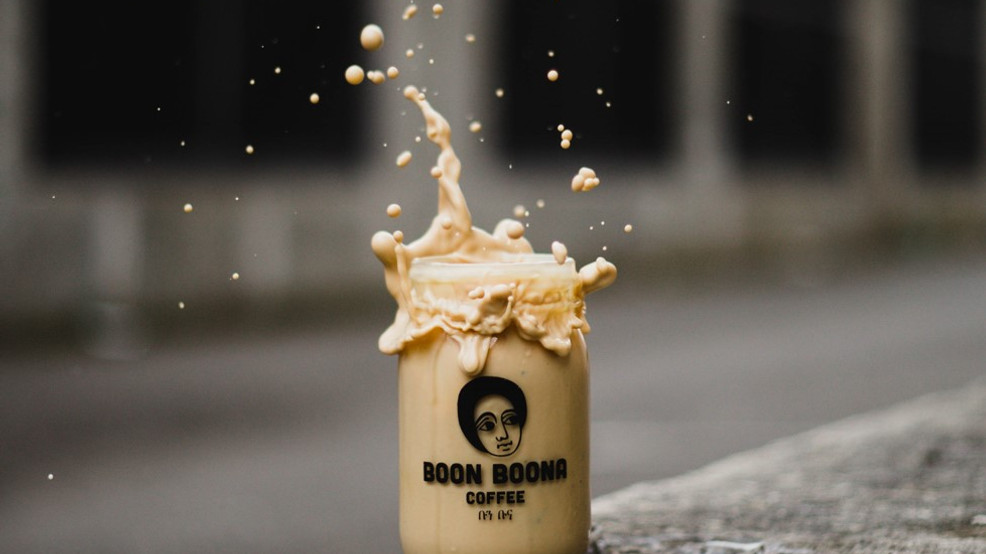 “Living in Seattle I was exposed to Starbucks, but it was nothing like what I experienced in Asmara, Eritrea," he said. "I fell in love with coffee after a trip to my homeland in 2011. I wanted to focus on relationship building on the Mother Continent, Africa.”

Fesaha reached out to friends and family in Ethiopia to source green coffee, which he then distributed to his community of Ethiopians/Eritreans who practice the traditional coffee ceremony. By 2013-14, he was distributing green coffee throughout Seattle and eventually into Los Angeles., the Bay Area, Atlanta and Toronto. In 2016, he collaborated with friends at Anchorhead Coffee to have some of his green coffee roasted, and by 2018, he had saved up enough to open his own brick-and-mortar location in Renton.

We chatted with Fesaha about what it means to bring African-sourced coffee to his inviting cafe, which is currently operating daily from 8 a.m. until 2 p.m. for to-go and curbside service. Their goods are also available online; they currently offer a monthly subscription and 50% off shipping within the U.S.

"Coffee consumption is very social in our culture; hospitality is key. I wanted that same feeling when entering into our space," said Fesaha of his cafe, which features brown tones and warm lighting. "I wanted the art to reflect the history and the origins of coffee. For example - Kaldi’s goat herder, and the continent of Africa with Kaffa, Ethiopia identified."

The space also aims to be a representation of the surrounding community by showcasing the work of locals.

"We are fortunate to have so many skilled artists in our area," he said. "The talents are not limited to painting, but also poetry, song and storytelling."

It was also important to Fesaha to show the transparent approach of their work by having coffee production done in the open. He explains that, upon walking in, if you're not first drawn to the wall mural by Yeggy Michael, you will be captivated by the roaster displayed in the middle of the café.

Most importantly, Fesaha desires to highlight and place more attention on Africa.

"I want everyone to know who we work with and how the impact of purchasing our coffee directly impacts the livelihoods of those on the continent," he said. "Development of a stronger coffee industry that benefits the producers on the continent of Africa is of the utmost importance. Africa produces the most natural resources - from coffee to diamonds. Historically, colonial powers have looted the people and the land of these resources. I wanted to build in a different manner and, even though we are small, we desire to do better than those before us."

In order to build long-lasting, sustainable relationships with farmers and communities they source from, the Boon Boona team partners with those who have an invested interest in the livelihoods of the producer.

"Our partners are from Burundi, Rwanda, Ethiopia and so on," said Fesaha. "Karehe is a coffee that is Burundi women-owned, produced, marketed and exported. Dur Feres is a coffee that is 51% owned by Ethiopian producers. When purchasing coffee we look for programs that offer some form of second payment to the producers (i.e., Farmgate Initiative - Nyamyumba), or like Dur Feres and Karehe, [the] majority shares owners are of African descent."

When looking at other retail bags of roasted coffee, they noticed that some companies include too many details to truly take it all in. Boon Boona decided to go a different route; on each roasted bag of their coffee, customers find a QR code that links to their website, which provides images of the farm, and details about the coffee and the journey it took before landing in your cup.

Fesaha hopes he and his team can provide a little comfort during these uncertain times.

"We want to provide an opportunity to connect, enjoy great coffee, all while keeping our six-feet of distance and masked up," he said. "We look forward to having our friends back in the space celebrating another pop-up or poetry night."

"I envision a Boon Boona that can show quantitatively and qualitatively the positive impact made in its local community, where a brick-and-mortar location is [located] - but also at its source, Africa."