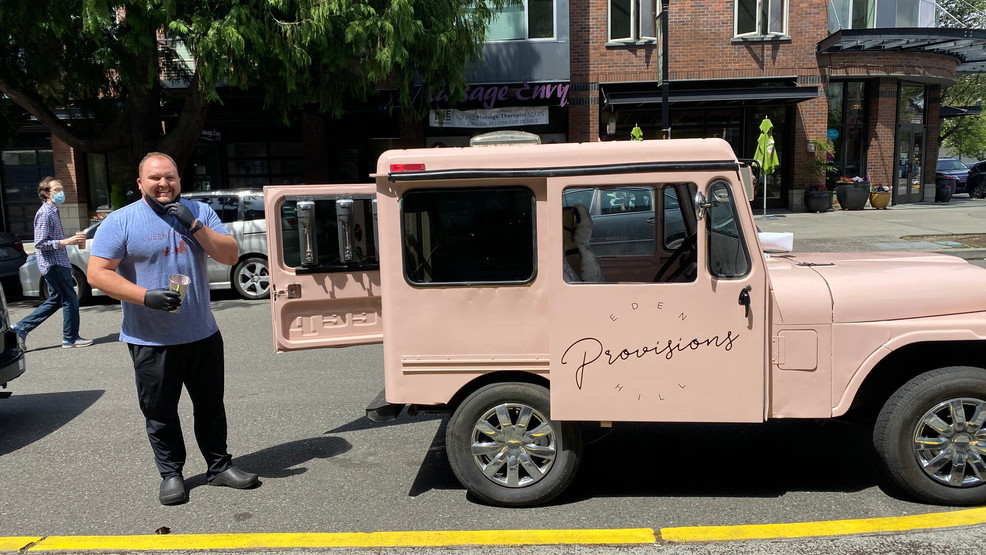 Move over ice cream trucks; the Milkshake Jeep is in town

It's the sound that's punctuated many a sweltering hot summer day: the jingle of an ice cream truck making its neighborhood rounds.

But if you find yourself in Queen Anne this summer and you happen hear Kelis' hit "Milkshake," or maybe a little Whitney Houston playing somewhere in the distance - it's a good bet Eden Hill Provisions' Milkshake Truck is close. That means sweet relief from the heat, in the form of a fresh-made shake.

"We've created a whole system where we come to your house, your neighborhood or your wedding and do milkshakes by the dozen," said Eden Hill Provisions chef/owner Maximillian Petty, who came up with the idea for the truck with his wife Jennifer. "It's not a money maker, it's just a smile maker - and that's kind of what we need right now.

Petty admits he is not a car guy, but he and his team spent several weeks turning an old jeep into a milkshake mobile. It's got a fresh pink paint job, along with a sound system, lights and three milkshake machines in the back. No surprise - the jeep has been an instant hit. It's made appearances at weddings, graduation parties and nearby neighborhoods, sometimes serving just a couple milkshakes, sometimes as many as 70 in a single hour.

Folks can reserve the milkshake jeep for $15/hour, though right now it doesn't leave Queen Anne. That's due to a very real concern it might breakdown on the highway (the auto shops on Queen Anne know the jeep well)! It's also Petty's way of bringing a little joy to a community that has rallied around his restaurants, Eden Hill Restaurant and Eden Hill Provisions.

Like so many other restaurants, Eden Hill Provisions pivoted to takeout in the wake of the pandemic. Its menu is now built around Petty's ultra-popular Big Max Burger, along with other signature items like chicken nuggets, fries and onion rings. Crowd-pleasing food made with a fine dining approach and, of course, a dash of fun.

"It's simpler, and it's just passion in a whole new way. The way we look at meat for the burger, the way we do the onion rings," explained Petty. "There's no real word for it. It has just adapted and it's beautiful in its own way. I thought I would hate it and I love it."

Folks can feel that love whenever they take a sip of an Eden Hill Provisions milkshake, whether it's from the restaurant or the jeep. Petty and his team are turning out the classic flavors: chocolate, vanilla and strawberry, along with a rotating collection of creative concoctions like huckleberry cheesecake and Petty's personal favorite, root beer. The root beer shake is made with vanilla ice cream and housemade root beer syrup, then finished with a little fresh root beer. It tastes like an ultra creamy root beer float, ice crystals and all. No matter what flavor you choose, a fresh milkshake served out of the back of a jeep, is a treat sure to illicit a smile with every sip.

"It's nice that we can remind everyone that the world is still tasty and we're still trying. It's just a good reminder there's still some happiness around."