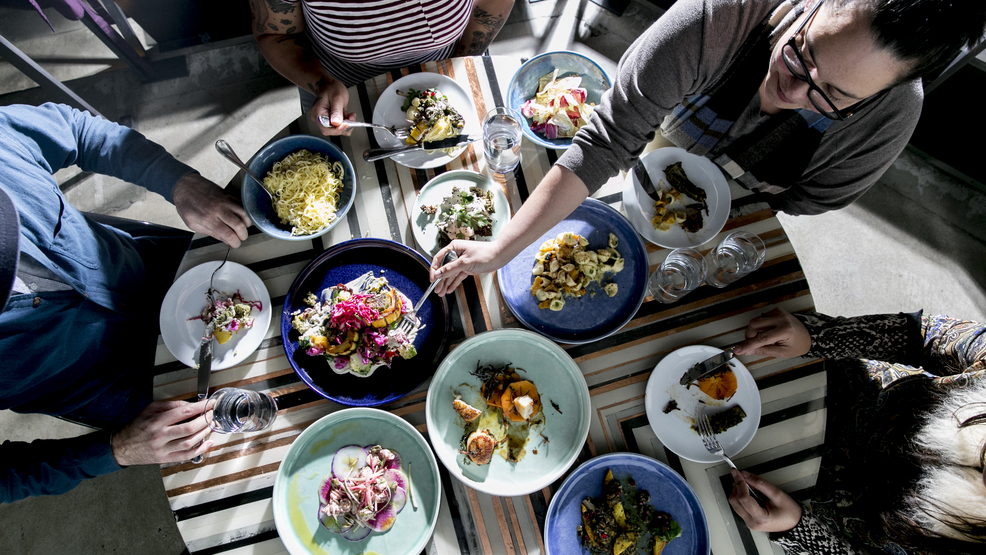 Mbar's food is amazing, but it's the environment that sets it apart

It's located on the 14th floor of a high-rise in the heart of South Lake Union, down a seemingly deserted hallway.

But step inside, and the city of Seattle is there to greet you. It's not hyperbole to say the view from this restaurant is spectacular. A panoramic portrait from the Space Needle to Lake Union to Capitol Hill, best enjoyed on a sunny day (or really anytime from the patio).

"Mbar is pretty interesting because you have the dining room where you can do your three course, four course, five course meal," said Executive Chef Jason Stratton. "[And then] you have the patio [where] it's awesome to sit out in the sunshine."

And while the food is delectable, it's the environment that sets Mbar apart.

"The food is important you now, but really it's about creating experiences with family and friends," said Stratton. "Passing plates around, and - I don't want to say food is an afterthought - but it's really about celebrating who you're with. I love this environment, to be able to create that for you. "

Stratton has cooked in some of the city's top kitchens: Le Gourmand, Cafe Juanita, Spinasse. He was named one of Food and Wine's Best New Chefs, and appeared on Season 13 of Top Chef. At Mbar, Stratton and his team are putting a Pacific Northwest spin on ancient Levantine cuisine.

"Levantine cuisine essentially is - the start of civilization in a sense," he said. "It's very much about healthful cooking, a lot of olive oil, a lot of spices. But really it's about that approach of - how do you make your way through a year? How do you take something that's delicious at its height and use technique to preserve it?"

It's also very much about communal eating.

"Food in the Mediterranean is very much a social thing," said Stratton. "You rarely go out without someone snacking or drinking, so for me it's about lifestyle. And obviously people understanding more and more about Middle Eastern cuisines and Levantine cuisine. It's on the up and up. It's about total lifestyle and finding a way of incorporating food which we don't always get in our hectic American life. It's about spending time and connecting with people around you, and the best way to do that is breaking bread."

One of Stratton's favorite part of Levantine cuisine is the constant play between salt and acid, two things he loves.

"It's a very vibrant, lively, light cuisine for the most part," he said. "It's definitely a lot of the mezze that are traditional, everyone knows hummus. But there's the broad range of dip-able, spreadable sort of things."

It's a very seasonal cuisine as well, and you can find plenty of traditional spices like za'tar, sumac, toasted sesame and tahini.

The dishes on their own are delicious, but at mbar - there's an equal focus on the experience of eating. Sitting at the table, connecting with those around you by breaking bread.

"I love creating food as a chef," said Stratton. "That's awesome. But for me the thing that's so special is when you talk to a table or something, and they're celebrating. It's really amazing to be a memory in people's lives and to share in somebody's life and be able to create that kind of memory. It's really special. I don't think a lot of people get to do that in their career necessarily, so to now that as a chef, all of our team, we're here to create those lasting memories for people? I feel very privileged."