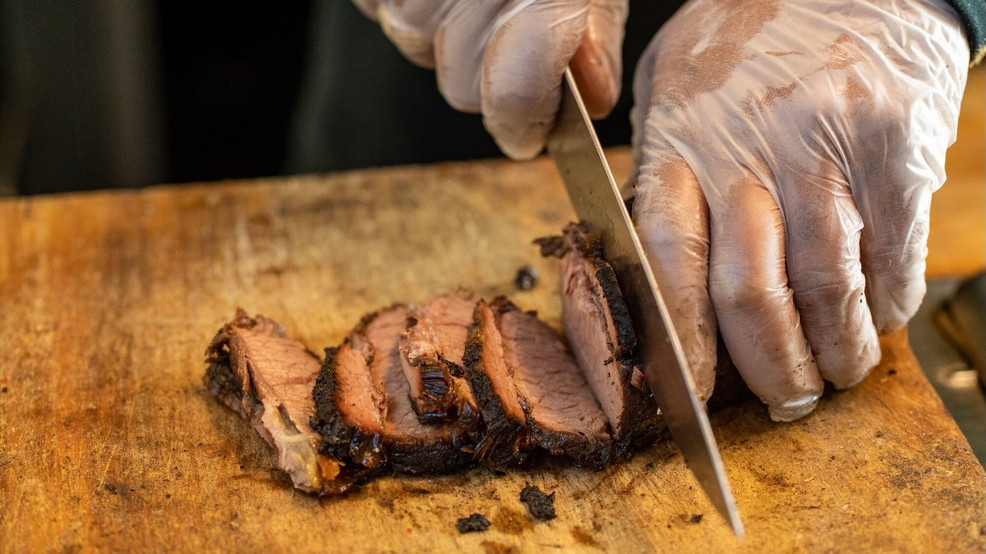 Warning: popping into Lew’s BBQ for a quick bite to eat might turn into an hours-long conversation with owner and chef Avery “Lew” Lewis. Lewis is a talker, but he’s also a listener—because he’s been through so much himself.

Lewis refers to his restaurant as a lighthouse in darkness. There, you can sit down and relax. If you’re lucky, you might get to hear a piece of Lewis’ story. Here, you get to read all of it.

Lewis grew up in a middle class household in South Central Los Angeles, the oldest of seven children. From the age of five years old, Lewis recalls being beaten by his father at least once a week.

“Every household has their issues,” Lewis said. “My father had his issues, but he’s my father. I love my father and I took care of my father until he died.”

Beyond his immediate family, Lewis was close with his extended family, especially his aunt and uncle who grew marijuana in their backyard. When Lewis was as young as nine years old, he became addicted to marijuana - and at the age of 14, Lewis was introduced to phencyclidine, also known as PCP or angel dust.

He was a talented football player in high school, but he admitted he would always rather party. After high school, Lewis tried cocaine and became addicted.

“I wasn’t too stable,” Lewis said.

He lived with his father most of the time, but when his days-long absences became too much, he was no longer welcome anywhere, having exhausted his familial resources. That was when Lewis became homeless. For seven years, Lewis lived on the streets of Skid Row in cardboard boxes, vacant garages, under the freeway and in bushes.

He explained that once your state of mind is constantly altered by drugs, “it just becomes normal, but you’re really abnormal. You don’t think like a normal person.” As days, weeks and months went by, Lewis said being homeless became easier, culminating into a seven-year stint on the streets. While living homeless and addicted to drugs, Lewis said he was the victim of police brutality three times. The third time, Lewis said, doctors did not think he would survive from all the head wounds he sustained.

After an unsuccessful first stay at a rehabilitation center when he was about 20 years old, he relapsed. Feeling like a failure, Lewis attempted suicide.

Things were not looking up, until one day, Lewis literally did - he looked up and found himself in front of a Spanish church. He walked into the middle of a service. Tired and dirty, Lewis sat in the back of the church until he was approached by church members who offered him a place at the rehabilitation center associated with them, Victory Outreach Christian Recovery Home.

Lewis attributes his acceptance of their invitation to his fatigue, but quickly grew to appreciate this leap of faith. Within six months, he was clean and invited to be the director of that home. He ran the center for ten years and was a worship leader as well.

He was then asked to help his pastor as a missionary in Italy. For six months, Lewis traveled the country and learned Italian - experiences he never thought he’d have.

Once Lewis returned to California, he got married and he now has three children: Avery, Isaiah and Mia. He worked for Los Angeles County for seven years until he received a call from God to move his family north to Washington state. Lewis immediately resigned and within a month moved to Washington and purchased a home down the street from family.

He took a job at Monroe Correctional Complex and was a corrections officer there for seven years. Lewis considered the inmates his brothers and sisters, “they just made some bad choices.”

“Since I’ve been behind bars, I know both sides,” Lewis said. “That became my ministry, going to work.”

Inmates began to look to him as a source of advice, and Lewis made informal appointments with inmates during his regular duties to counsel them.

“I had a lot of respect for them,” Lewis said. “You’ve got to help everybody everywhere, not some people sometimes.”

Then, Lewis got another call from God - this time, with instructions to open up a restaurant. He had already been catering for three years at that point and had been cooking for decades since he was assigned the task as a weekly childhood chore. Lewis believes “food opens the door to the heart of the person,” so he opened Lew’s BBQ. He noticed a gap in the barbecue food options in the Everett area and knew he had to fill it with modified family recipes using healthier alternatives.

That was eight years ago, and since, Lewis has seen “a lot of things happen in the restaurant.” He believes it’s a lighthouse for people who need help of any kind. That inspired him to start Feed the Need, an annual community event during which Lewis serves his barbecue free of charge, and provides clothing, household items and toys for families in need. Lew also invites organizations like shelters, housing programs and rehabilitation centers to come and share information with attendees of Feed the Need.

“God did something for me, so this is my way of giving back,” Lewis said. “This is a calling.”

Beyond Feed the Need, Lewis loves hosting car shows and community gatherings in the summer, where his restaurant location becomes “one big block party.”

On a regular day, Lewis described his morning routine as waking up, taking time with God and opening the restaurant to wait and see who comes in. Lewis has continued to serve as the counselor he once was at Monroe Correctional Complex, now just from his restaurant.

“I never know who’s going to be there in a given day,” he said. “I don’t know what’s going to happen.”

Lewis is a one-man-show at Lew’s BBQ, serving as cashier, chef and server. He hopes to one day own the building his business operates out of, and his ultimate goal is to expand the business into a barbecue and soul food buffet. He envisions customers paying one price to be served food from various stations with the option to take the food to-go. Lewis also aims to expand Feed the Need to do even more for the community.

“I am blessed,” Lewis said, “so I want to be a blessing to others.”

Lew's is located at 2703 Pacific Ave Everett, WA 98201. Want to support more small businesses like Lew's? We're proud to collaborate with Intentionalist, an online guide that makes it easier for you to find/connect with diverse local businesses owned by women, people of color, veterans, members of the LGBTQ community, and people with disabilities.