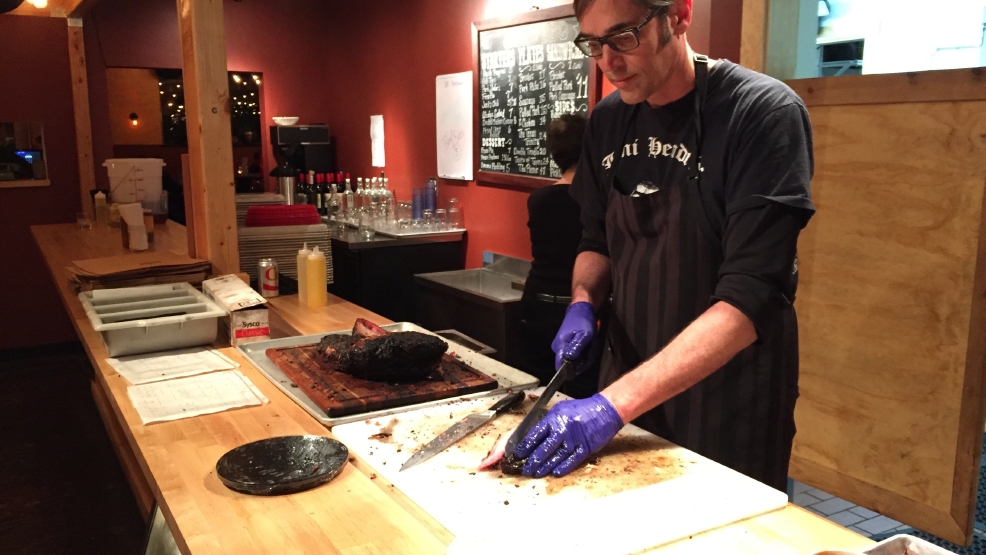 Is it possible to get Texas-style barbecue in Seattle?

There are a number of foods that people have a deep, fierce love for. That when they're discussed, these foods will bring out a level of passion and combustion akin to a political donnybrook. Japanese Ramen. Filipino chicken adobo. Pizza. These all inspire emotion.


Barbecue is also a part of this, and style and regionality usually comes into play. Barbecue in the Hill Country of Texas is different than barbecue in North Carolina. In the Seattle-area, aficionados lament that there aren't places that can sate their nostalgic taste buds (which is close to impossible), Jack Timmons is looking to have his Jack's BBQ as the spot for BBQ in town.


We mentioned Jack's BBQ as a place to have an epic meal to close out 2014 with their picnic for four; a smorgasbord of food piled high with brisket, pork ribs, chicken, pulled pork, sausage, and sides. After visiting Jack's BBQ recently for a food blogger event, I was able to learn more of Jack Timmons' background and the steps it took for him to open Jack's BBQ.


The story for Jack Timmons started like this; originally from Dallas (he still has a casual and amiable drawl to his voice), he moved to Seattle and worked at Microsoft. But the waft of smoke beckoned and Timmons learned as much as he could about the science and labor of love that is the combination of smoke, meat, and time. This took him to his alma mater, Texas A&M, for their BBQ Summer Camp; a program through the Aggies' Meat Sciences department that is a crash course for barbecue fanatics and carnivores. Another part of his barbecue walkabout was to try all of Austin's barbecue joints. This included places such as Louis Mueller's, Smitty's, Black's, and Franklin's. Timmons ate and he learned the characteristics of what makes for delicious barbecue. The next step (after trucking his smoking rig from Texas to Seattle) was his Seattle Brisket Experience, where Timmons hosted pop-ups around town for his friends and 'cue fanatics to take in what Jack and his smoker were cooking. These proved immensely popular and as he built capital and street cred, a restaurant was the next step.


This all brought Timmons to open up his Jack's BBQ in September. Located on Airport Way in what used to be Bogarts, it's part of a neighborhood that isn't really SoDo or Georgetown, rather the Industrial District. The restaurant has a bar with drinks like an Old Fashioned with smoked oranges and Shiner Bock, a Texas beer staple. For the barbecue, we mentioned the meats that comprise the picnic for four, but be sure to try and visit on a Tuesday as Jack's serves up beef ribs. Also, keep an eye out for their specials; for example, they smoked turkeys for Thanksgiving and prime rib for Christmas.


Jack's BBQ makes their barbecue without any short cuts. The crew arrives around 4am to load their two smokers with mesquite (with a little hickory and post oak) brought from Texas to provide the flavor that Timmons is looking for. They'll fire the pits for forty odd minutes until clear smoke starts coming out of them before adding the meat; this is a Central Texas-style of smoking home to Jack. The Jack's BBQ team includes Tony White, a pitmaster from Austin whom Timmons coins 'The Brisket Whisper', and Wesley Shaw, a native Texan formerly of Poppy. When I spoke with White on what he looks for with brisket and knowing when it's ready, he showed me the four points to touch on the brisket from the lean flat end to the fatty point end and said that it's ready when the touch feels like a pillow.


Seattle does have a tradition with barbecue. But it is more in the vein of alder-smoked salmon or the chinese bbq pork that I grew up with. There are starting to be more and more restaurants around town that harken back to the pillars of barbecue from places like Texas, the Carolinas, Memphis, and Kansas City. Jack Timmons hopes that his Jack's BBQ is reminiscent of the bbq houses in Central Texas and Seattle is the beneficiary, as we get slow-smoked meats at the ready just a short drive south of downtown.


(Eater Seattle reported that Jack's BBQ is hosting a pop-up at their restaurant on February 19th called SweetBumpas. Hosted by Matt Bumpas, former pastry chef at Poppy. SweetBumpas will include a full dinner from Jack's and feature desserts viewed from the South as far as the eye can see.)